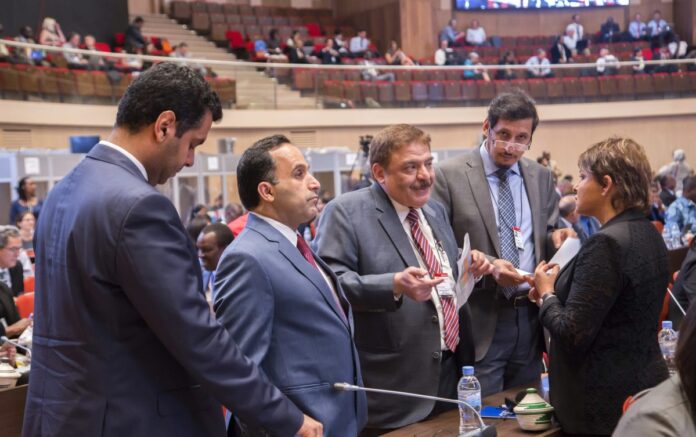 The Senate Foreign Relations Committee voted on May 4 to advance the Kigali Amendment to the Montreal Protocol, moving the United States closer to formalizing the phasedown of hydrofluorocarbons (HFCs) already included in 2020’s American Innovation and Manufacturing Act (AIM).

The AIM Act was passed as part of the Consolidated Appropriations Act of 2021 and signed into law by President Trump on Dec. 28, 2020. The Environmental Protection Agency (EPA) has already moved ahead with the reduction in HFC consumption and production, with EPA administrator Michael Regan issuing a rule-based on AIM in September 2021.

HFCs were developed to supplant the chlorofluorocarbons (CFCs) and other ozone-depleting substances used in refrigerators.

The phasedown of ozone-depleting substances started with the Montreal Protocol, signed by President Ronald Reagan in 1988 and adopted by every UN member state.

Yet while HFCs do not damage the ozone layer, they too are a danger to the environment; some scientists have estimated their global warming potential to be hundreds of times greater than that of carbon dioxide.

Some research has estimated that an HFC phasedown could avoid up to half a degree Celsius of warming by 2100.

Yet skeptics such as Patrick J. Michaels and Benjamin Zycher have said that the 0.5-degree claim is based on faulty assumptions and motivated by monied interests, as the pair argued in a Washington Examiner op-ed.

While DuPont, the inventor of CFCs, pushed back against CFC restrictions during the years leading to the Montreal Protocol’s passage, Michaels and Zycher claimed that the company’s current support for the elimination of HFCs is related to its own production of costly HFC alternatives.

The Epoch Times has reached out to DuPont for comment.

In all, 170 countries have agreed to the 2016 Kigali Amendment to the Montreal Protocol.

Like the AIM Act, that amendment obligates parties to slowly curb the production and use of HFCs by 85 percent over 15 years.

However, the Kigali Amendment would restrict trade between signatories and non-signatories by 2033, leading both Democrat and Republican lawmakers to push for its passage.

Sen. John Kennedy (R-La.) and Sen. Tom Carper (R-Del.), co-authors of 2020’s AIM Act, made that argument in a joint op-ed for The Washington Times.

“The AIM Act is already bringing the U.S. into alignment with the Kigali Amendment’s plan to phase down HFCs. It only makes economic sense that the Senate now ratify this agreement to ensure that the U.S. can capitalize on the success of the AIM Act instead of unnecessarily limiting our trade partners and giving our competitors—or even adversaries like China—a leg up at the expense of hardworking Americans,” Carper and Kennedy wrote in that April article.

In November 2021, Carper praised Biden when he first transmitted the amendment to the Senate.

“It’s long past time that we join the rest of the international community in addressing HFCs and taking the kind of bold, transformational climate action that this moment demands,” he said.

Kennedy has argued that passage of the amendment could spur the production of next-generation coolants in his home state of Louisiana, currently a hub for HFC manufacturing.

“Ratifying the Kigali Amendment will expand the global market for American-made technologies and safeguard U.S. investments,” Kennedy said in a statement accompanying his Washington Times op-ed.

A Kennedy aide told The Epoch Times that alternative coolant production in Louisiana includes OxyChem’s manufacturing of the refrigerant constituent 4CPe as well as Honeywell’s production of Solstice ze (1234ze).

“Louisiana is not only home to the chemical manufacturers producing these HFC alternatives, but the state is home to HVAC companies that will begin manufacturing next-generation air conditioning and heating systems,” the spokesperson added.

The committee’s vote moves the Kigali Amendment closer to being ratified by the full Senate.

The only senator on the Foreign Relations Committee who voted “nay” on the amendment was Sen. John Barrasso (R-Wyo.).

The Epoch Times has reached out to Barrasso for comment.