Federal Reserve Hikes Rates by 50 Basis Points, the Most Since 2000 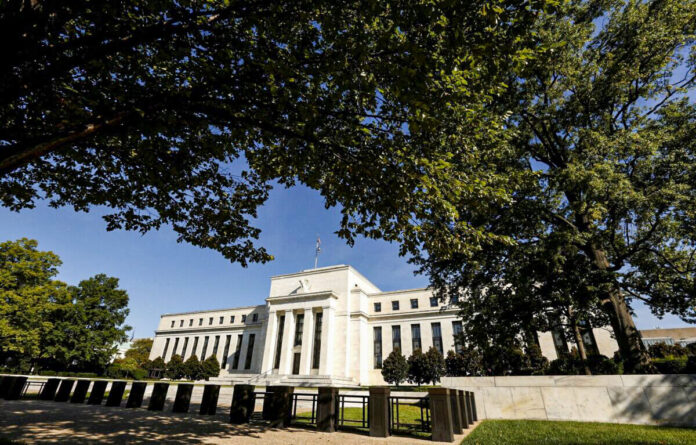 The Federal Reserve raised interest rates by the most since 2000 on Wednesday as part of efforts to fight 40-year-high inflation.

Officials serving on the Federal Open Market Committee (FOMC) agreed to hike the benchmark fed funds rate by 50 basis points, bringing it to a target range of 0.75 percent to 1 percent.

The Fed will also begin trimming the more than $9 trillion balance sheet. The institution confirmed that it will start selling $47.5 billion in assets. After three months, the central bank would increase it to $95 billion, a measure that might reduce liquidity from money markets for several years.

In an FOMC statement, the Fed acknowledged that it is concerned about elevated broad-based inflation pressures.

“The invasion of Ukraine by Russia is causing tremendous human and economic hardship. The implications for the U.S. economy are highly uncertain. The invasion and related events are creating additional upward pressure on inflation and are likely to weigh on economic activity. In addition, COVID-related lockdowns in China are likely to exacerbate supply chain disruptions. The Committee is highly attentive to inflation risks.”

Stocks were mixed after the news as the Dow Jones Industrial Average and the S&P 500 were up modestly. The Nasdaq Composite Index was relatively flat.

Why there is such an emphasis on interest rates is that the Fed’s actions influence borrowing costs. When rates are higher, it might discourage more consumers from taking out a mortgage or applying for an automobile loan.

Investors may also be less aggressive, especially following a period of historically low-interest rates. But it could encourage more households to save.

“When the Fed raises or reduces the cost of money, it affects interest rates across the board,” says Greg McBride, CFA, Bankrate chief financial analyst. “One way or another, it’s going to impact savers and borrowers.”

A Neutral Rate is Coming?

In recent weeks, central bank officials had signaled they were going to be more aggressive in tightening monetary policy to fight inflation. On multiple occasions, Fed Chair Jerome Powell noted that he wants to bring the benchmark rate to neutral territory—a rate that neither stimulates nor limits economic growth—which the institution’s latest quarterly economic forecast has pegged at 2.4 percent.

“It may be that the actual [inflation] peak was in March, but we don’t know that, so we’re not going to count on it,” he said at an International Monetary Fund (IMF) event in April. “We’re really going to be raising rates and getting expeditiously to levels that are more neutral and then that are actually tight … if that turns out to be appropriate once we get there.”

Other FOMC members have echoed Powell’s sentiment on reaching a neutral rate by the year’s end.

“I see an expeditious march to neutral by the end of the year as a prudent path,” said San Francisco Fed Bank President Mary Daly last month.

“On the way to December, you’d be looking for any confirmation of the storyline,” Evans said. “It could be that short-term neutral is actually lower, and that by the time we get to 2.5, it’s actually contractionary for a variety of reasons. It could go the other way too,” he said.

That said, the 2.4 percent figure has led to disagreement among some economists, who purport that a neutral rate is a lot higher when the central bank’s preferred inflation gauge—the personal consumption expenditure (PCE) price index—is running north of 5 percent.

Still, the interest-rate futures market anticipates that the central bank will increase the fed funds rate to 2.4 percent by the end of the year and maintain its upward trajectory to 3.5 percent sometime in 2023.

According to the CME FedWatch Tool, most of the market is penciling in another half-point rate hike next month.

With the first-quarter GDP contracting, and market analysts expecting sluggish growth in the coming months, it is going to be “a delicate balancing act” for the Federal Reserve, says John Leer, Morning Consult Chief Economist.

Powell has stated that his goal is to accomplish a soft landing: lowering inflation, supporting economic growth, and maintaining a strong labor market.

“The Federal Reserve is in a tough spot right now as it navigates elevated risks of a recession. They want to raise rates high enough and fast enough to curb inflation, but they don’t want to tip the economy into a recession. It’s a delicate balancing act that’s sure to test Fed policy,” wrote Leer in a note.

Whatever happens, Ken Mahoney, the CEO and president of Mahoney Asset Management, believes the Fed has “lost credibility overall.” Many experts, including Mahoney have pointed to last year’s insistence by the Fed that inflation was transitory.

According to Mahoney, the best opportunity to raise interest rates by 50 basis points was last year, when the GDP expanded more than 5 percent.

“Instead, we are here raising rates when first-quarter GDP was negative and inflation is clearly here to stay,” Mahoney told The Epoch Times. “It feels like there’s a bidding war with the Fed governors. One says four rate hikes, another says eight, another says I’m more hawkish than you I say 12. I think at the end of the day it will be three or four because the economy couldn’t withstand more than that in this case, and the market would buckle further.”

Robert R. Johnson, chair and CEO of Economic Index Associates, disagrees with pundits who have conveyed their disapproval over the Fed’s actions.

“Based on past experience, pundits have expressed little confidence that the Fed will be able to get inflation under control and orchestrate a soft landing for the economy,” the Professor at Heider College of Business, Creighton University, told The Epoch Times. “I disagree and am in agreement with Warren Buffett who on Saturday called Jay Powell ‘a hero’ whose aggressive action avoided an economic disaster.”

Treasury Secretary Janet Yellen, who served one term at the head of the central bank, averred that the Fed must be “skillful” and “also lucky” to facilitate a soft landing.

Speaking at a Wall Street Journal CEO Council conference Wednesday, Yellen reaffirmed her confidence in the post-pandemic U.S. economy, but conceded that inflation remains a problem.

On the data front, all eyes will be on the April jobs report on Friday and next week’s April consumer price index (CPI) numbers.

Meanwhile, the American people could be losing confidence in the more than century-old institution.

A new Gallup survey found that only 43 percent have a “great deal” or “fair amount” of confidence in Powell, down from 55 percent last year. This is below his term average of 50 percent, but it is in the same ballpark as his two predecessors: Ben Bernanke and Janet Yellen.

The next two-day FOMC meeting will be held on June 14 and 15.