The Leaked Attack on Roe Draws on Familiar Arguments 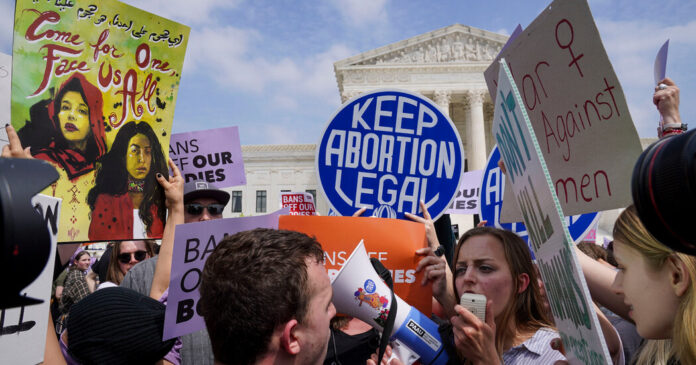 WASHINGTON — The draft Supreme Court opinion overruling Roe v. Wade is a sort of white paper prepared by the conservative legal movement long ago, awaiting only the arrival of a conservative majority ready to adopt it.

The opinion, by Justice Samuel A. Alito Jr., set out familiar critiques of the Roe decision, which established a constitutional right to abortion in 1973. Indeed, it is an expert distillation of conservative talking points dating to the Reagan administration.

They boil down to two propositions. First, the Constitution is silent on the question of abortion, meaning that states can allow it, regulate it or ban it. Second, Roe was so poorly reasoned, divisive and unworkable that it does not deserve the respect usually owed to precedents.

The draft opinion, published by Politico, also gives evidence of an emboldened majority that is prepared to take assertive steps to revise settled understandings in other areas of the law, notably the Second Amendment, affirmative action and religious objections to gay rights.

Until the death of Justice Ruth Bader Ginsburg in 2020, Chief Justice John G. Roberts Jr. held the key vote in closely divided cases. Generally conservative, he nonetheless preferred to move incrementally and to guard the legitimacy of the court.

But the replacement of Justice Ginsburg by Justice Amy Coney Barrett, President Donald J. Trump’s third appointee to the court, changed the dynamic. The chief justice was now outflanked by the five justices to his right.

If nothing else, the draft opinion demonstrates at least one thing: that soon after the justices heard arguments in a challenge to Roe v. Wade in December, at least five of them voted to overrule it at their private conference. Politico reported that Justices Alito, Barrett, Clarence Thomas, Neil M. Gorsuch and Brett M. Kavanaugh made up the majority.

The court confirmed the authenticity of the draft on Tuesday even as it cautioned that “it does not represent a decision by the court or the final position of any member on the issues in the case.”

The Supreme Court’s upcoming decision in Dobbs v. Jackson Women’s Health Organization could be the most consequential to women’s access to abortion since 1973.

The draft opinion was circulated in February. Further drafts have doubtless been produced and exchanged. The court’s actual decision is not likely to land until late June.

It is possible that the court’s bottom line will change. It is very probable that the details of the leaked opinion will evolve in later drafts. But the draft nevertheless gives a good overview of the structure of the arguments that could put an end to Roe.

They start with the words of the Constitution.

“The Constitution makes no reference to abortion,” Justice Alito wrote, “and no such right is implicitly protected by any constitutional provision.” He acknowledged that the due process clause of the 14th Amendment, which protects “liberty,” “has been held to guarantee some rights that are not mentioned in the Constitution.”

But those implicit rights, he wrote, quoting a 1997 decision, “must be ‘deeply rooted in this nation’s history and tradition’ and ‘implicit in the concept of ordered liberty.’”

Abortion, he wrote, is not such a right. “Indeed,” Justice Alito wrote, when the 14th Amendment was adopted, “three-quarters of the states made abortion a crime at all stages of pregnancy.”

Other rights protected by the 14th Amendment, he added, did not have to balance a competing interest: that of fetal life.

Justice Alito’s second main point was that the doctrine of stare decisis, Latin for “to stand by things decided,” does not preclude overruling Roe and Planned Parenthood v. Casey, the 1992 decision that reaffirmed Roe’s central holding that states may not ban abortion before fetal viability, around 23 weeks of pregnancy.

“Roe was egregiously wrong from the start,” Justice Alito wrote. “Its reasoning was exceptionally weak, and the decision has had damaging consequences. And far from bringing about a national settlement of the abortion issue, Roe and Casey have enflamed debate and deepened division.”

In four places, the draft opinion quoted from a dissenting opinion in a companion case to Roe chastising the majority for exercising “raw judicial power.” If the draft or something like it is adopted to overrule Roe, the court may hear a version of the same criticism.

Justice Alito included a long list of decisions in which the court had overruled precedents. They included some of the court’s greatest hits, including landmark cases on racial equality and gay rights.

“Without these decisions,” he wrote, “American constitutional law as we know it would be unrecognizable, and this would be a different country.”

Justice Alito, generally an opponent of citing foreign law, said that the viability framework was at odds with international practice.

“The viability line, which Casey termed Roe’s central rule, makes no sense, and it is telling that other countries almost uniformly eschew such a line,” he wrote. “The court thus asserted raw judicial power to impose, as a matter of constitutional law, a uniform viability rule that allowed the states less freedom to regulate abortion than the majority of western democracies enjoy.”

Justice Alito, summarizing the views of abortion opponents, wrote that there was less need for access to the procedure given societal developments.

“They note that attitudes about the pregnancy of unmarried women have changed drastically; that federal and state laws ban discrimination on the basis of pregnancy, that leave for pregnancy and childbirth are now guaranteed by law in many cases; that the costs of medical care associated with pregnancy are covered by insurance or government assistance; that states have increasingly adopted ‘safe haven’ laws, which generally allow women to drop off babies anonymously; and that a woman who puts her newborn up for adoption today has little reason to fear that the baby will not find a suitable home,” he wrote.

Those assertions are contested and may draw comparisons to a passage in Justice Anthony M. Kennedy’s majority opinion in a 2007 decision upholding the federal Partial-Birth Abortion Ban Act. Justice Kennedy supplemented his legal analysis with observations about motherhood that some women found patronizing.

“While we find no reliable data to measure the phenomenon,” he wrote, “it seems unexceptionable to conclude some women come to regret their choice to abort the infant life they once created and sustained. Severe depression and loss of esteem can follow.”

The Biden administration, in a brief supporting the abortion providers in the new case, argued that overruling Roe would threaten many rights, including to same-sex marriage and contraception.

“None of those practices is explicitly mentioned in the Constitution,” the brief said, “and most of them were widely prohibited when the 14th Amendment was adopted.”

“To ensure that our decision is not misunderstood or mischaracterized, we emphasize that our decision concerns the constitutional right to abortion and no other right,” he wrote. “Nothing in this opinion should be understood to cast doubt on precedents that do not concern abortion.”

All the court was doing, he said, was returning the question of whether and how to restrict abortion to elected lawmakers. “Roe and Casey must be overruled,” Justice Alito wrote, “and the authority to regulate abortion must be returned to the people and their elected representatives.”

He said the court should not care about the public’s reaction to the decision, failing to anticipate that the release of the draft opinion would give the court a vivid preview.

“Whatever influence the court may have on public attitudes must stem from the strength of our opinions,” he wrote, “not an attempt to exercise ‘raw judicial power.’”