Rob Stein, Who Changed How Politics Is Funded, Dies at 78 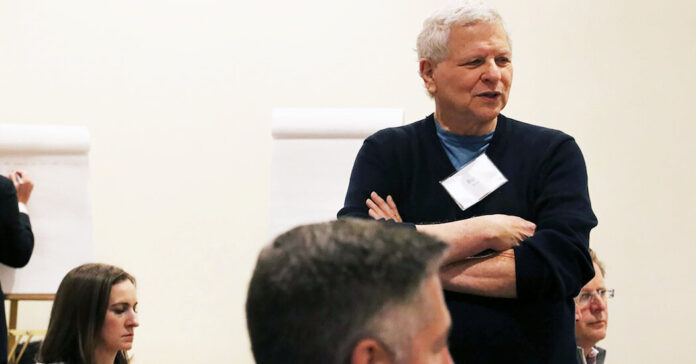 Rob Stein, a Democratic strategist who helped reshape American politics by pioneering new ways for wealthy liberals to influence policy debates and elections, died on Monday at a hospice facility in Washington. He was 78.

His son Gideon said the cause was metastatic prostate cancer.

After a varied career in which he worked as a public interest lawyer and a top adviser to the Democratic Party and the Clinton administration and created nonprofit groups and a venture capital fund, Mr. Stein found his calling in the wake of the 2002 elections.

The president’s party usually fares poorly in midterm elections, but Republicans captured the Senate, giving them control of both chambers of Congress and the presidency, as well as the majority of governorships and state legislative seats. This left Mr. Stein concerned that Republicans could be headed for long-term dominance if Democrats failed to understand and counter their rivals’ superior tactics and political machinery.

He spent months obsessing over the advocacy groups and think tanks that collectively constituted the conservative movement. He routinely stayed awake past midnight studying tax filings to map the flow of cash to these groups.

Mr. Stein crystallized his research into a PowerPoint presentation called “The Conservative Message Machine’s Money Matrix,” which was intended as a sort of Rosetta stone for understanding the conservative movement and its funding. He began showing it to Democratic political operatives and major donors around the country, developing a following among some of the most influential figures on the left.

After President George W. Bush was re-elected and Republicans increased their majorities in Congress in 2004, Mr. Stein launched a coalition of major liberal donors, the Democracy Alliance, to offset the Republican advantages detailed in his presentation. Each member had to commit to donating at least $200,000 a year to groups recommended by the alliance — including outfits supporting progressive causes, like fighting climate change and protecting abortion rights, that generally aligned with the Democratic Party.

Its founding members included some of the biggest donors on the left, among them the financier George Soros.

The alliance’s donors have combined to give more than $2 billion to recommended groups, the organization said. Their donations have helped seed some of the most important institutions on the left, including America Votes, Media Matters and the Center for American Progress.

It wasn’t long before Republicans were trying to organize donor coalitions of their own to mimic some of the strategy behind the Democracy Alliance.

“It just changed the way people thought about their philanthropy,” said David Brock, the former conservative journalist who became a leading Democratic operative and who founded Media Matters.

In the 2022 election cycle, Media Matters and a network of affiliated groups subsequently created by Mr. Brock are on pace to spend $100 million, Mr. Brock said. He added that none of that would have been possible without Mr. Stein and the Democracy Alliance.

“It was revolutionary for our side, and over the last 20 years it was the sole reason why sustainable Democratic infrastructure got built,” he said.

Robert Jay Stein was born on Oct. 26, 1943, in Wheeling, W.Va. His father, Charles, owned a chain of lumberyards, and his mother, Janis (Harrison) Stein, was involved in local arts, social service and religious organizations.

He graduated from the Linsly Military Institute (now the Linsly School) in Wheeling before attending Antioch College in Ohio, a hotbed of progressive politics and activism.

“It opened my brain to both conservative values and liberal values, and I became respectful of both, even though over time I became more in the liberal camp,” Mr. Stein said in an interview last month.

He went on to the George Washington University Law School in Washington, where he would make his home for the rest of his life.

He worked as a public interest lawyer for 10 years, then helped create or run a series of nonprofit organizations focused on issues including nutrition, refugees, organizational management and voter participation.

Ahead of the 1988 Democratic National Convention, Mr. Stein was recruited to develop a presentation about mobilizing voters. That led to positions as an adviser to the Democratic National Committee under Chairman Ronald H. Brown, and then as chief of staff to Mr. Brown when President Bill Clinton named him commerce secretary in 1993.

Mr. Stein left the Commerce Department shortly before Mr. Brown’s death in a plane crash in 1996 to help start a venture capital fund focused on women-owned businesses. When he formed the Democracy Alliance, he infused it with principles typically associated with venture investing.

In addition to his son Gideon, from his marriage to Mary Ann (Efroymson) Stein, which ended in divorce, Mr. Stein is survived by his wife, Ellen Miley Perry; their daughter, Kat Stein; two other children from his first marriage, Dorothy and Noah Stein; and five grandchildren.

After the Supreme Court’s 2010 Citizens United decision prompted a surge in political spending, much of it funded by undisclosed sources, Mr. Stein grew increasingly concerned that big money was deepening polarization and distrust in government.

While he urged Democrats not to “unilaterally disarm,” he also began talking about ways to bridge partisan divides and reform politics. That became a larger part of Mr. Stein’s focus after Donald J. Trump’s election in 2016.

He advised several groups on building coalitions of donors and operatives across the political spectrum to fight what he saw as a slide into authoritarianism exacerbated by Mr. Trump.

Mr. Stein applied thinking and strategy from the Democracy Alliance to encourage “a new cross-partisan pro-democracy infrastructure,” said Sarah Longwell, a longtime Republican operative who has worked to loosen Mr. Trump’s grip on the party.

“He was especially attentive to those of us on the right who had never had common cause with Democrats,” said Ms. Longwell, who helped create and run two organizations that oppose Mr. Trump and his allies: the Bulwark website and the political group Defending Democracy Together.

She said Mr. Stein, whom she considers a mentor, was “a relentless cheerleader for the project of democracy.”