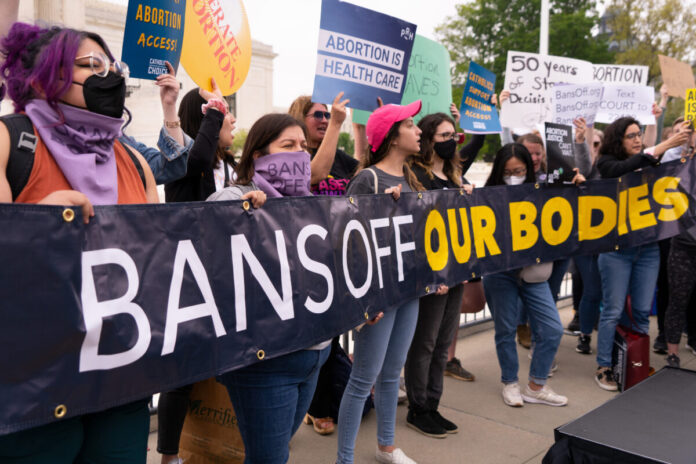 Hundreds of people gathered outside the Supreme Court building early Tuesday to voice their reactions to the leak of a draft ruling by the court, which signaled that the landmark abortion statue Roe v. Wade would be overturned.

One of the protestors, Patrick Mahoney, chief strategy officer for Stanton Public Policy Center, a pro-life organization, reacted to the leak of the draft opinion, calling it “deplorable.”

The Supreme Court should not be manipulated or politicized, he told The Epoch Times.

Regardless, he said, “we’re thrilled about the decision.”

Abortion rights supporters, however, are upset by the ruling, which would put an end to federal protection of abortion rights and leave the decision to the states.

Tarah Demant, a director at Amnesty International, a global human rights group, reacted to the leaked decision, claiming that it will not stop abortion but instead lead to a significantly greater percentage of unsafe abortions.

“It’s an absolute travesty of human rights,” she told The Epoch Times.

Demant believes it is extremely unlikely that this decision will be drastically altered.

What the Supreme Court ultimately needs to know, she continued, “is that the overwhelming majority of Americans support the right to abortion.”

“This isn’t about the will of the people. This is about an extreme religious minority imposing their will on Americans,” Demant said.

Americans are deeply divided about abortion, including its morality.

In May last year, the percentage of Americans who believe abortion is morally acceptable reached a new high of 47 percent, up from 36 percent in 2009, according to Gallup.

While popular support for legal abortion has risen and fallen over the last two decades, it has remained relatively stable in the last five years, according to Pew Research Center. A 2021 Pew survey found that 59 percent believed abortion should be allowed in all or most circumstances, while 39 percent said it should be outlawed in all or most circumstances.

Kate Hoeting, a member of Catholics for Choice, a nonprofit organization that advocates for abortion rights, stated that “extreme Christians” are attempting to erode fundamental human rights.

“This is a case of a small number of white Christian men taking control of the government,” she told The Epoch Times.

“We are going to fight back,” Warren told her supporters.

Poor and young women, she said, would suffer the brunt of repealing Roe v. Wade.

But not all progressives agree with Warren.

“There are millions of us not just progressive pro-lifers, but secular pro-life people as well who think that our progressive values must also include unborn people,” Turner told The Epoch Times.

Turner, who resides in San Francisco, also stated that her own experience with sexual abuse influenced her decision about abortion.

“I’m really happy that I changed my mind. I think that our unborn human siblings deserve equal right to live.”

Emel Akan is White House economic policy reporter in Washington, D.C. Previously she worked in the financial sector as an investment banker at JPMorgan and as a consultant at PwC. She graduated with a master’s degree in business administration from Georgetown University.