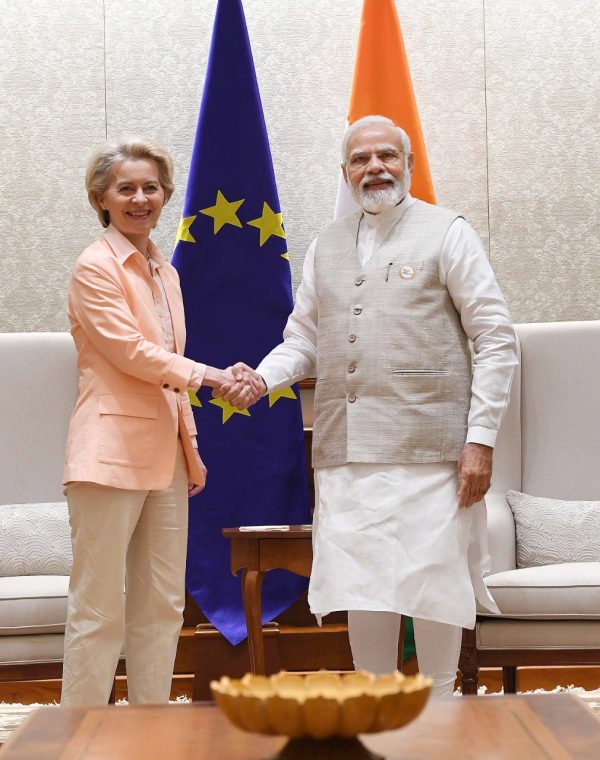 Over the last month, European leaders engaged with the two biggest holdouts in the quest to punish Russian President Vladimir Putin for the Ukraine war: China and India. The two expeditions couldn’t have gone more differently.

At the EU-China virtual summit held in early April, the two sides sparred over Ukraine, both publicly and privately, prompting the EU’s foreign policy chief, Josep Borrell, to memorably describe the meeting as “a dialogue of the deaf.”  In New Delhi, by contrast, historic deals were signed as the European Commission’s president, Ursula von der Leyen, sought to improve trade and investment ties with India.

In many ways, these key meetings signaled the EU’s efforts to execute a paradigm shift in foreign policy. For years, the EU has tried to keep economic ties with China — its largest trade partner — insulated from political differences. Despite quarrels over human rights violations, the origins of the pandemic, Chinese medical equipment and sundry other issues, economic ties remained and flourished.

In the last decade, many EU members were quick to join China’s Asian Infrastructure Investment Bank and partake in Beijing’s foreign investment spree, despite Washington’s protests. When former U.S. President Donald Trump launched his trade war against Beijing, most leaders in Western Europe were eager to stay above the current.

Chinese President Xi Jinping’s vocal support for Putin has changed these equations. Under the threat of an axis between Putin and Xi in the aftermath of the Ukraine invasion, Europe is now looking to hedge its bets and wean off its overwhelming economic dependence on China.

India looks set to be the accidental beneficiary.

In practice and rhetoric, there is little difference between Indian and Chinese positions on the Ukraine war. Both countries have abstained on various U.N. resolutions seeking to condemn Russia’s invasion. Both countries have made similar statements, calling for the war to end but unwilling to pin the blame on Putin.

India has also kept its trade ties with Russia intact — and has, in fact, boosted them further since the beginning of the war. In March and April this year, India signed contracts to import more Russian oil than it did last year. India also imported more Russian coal this March than it had in any month since January 2020.

India’s Minister for External Affairs S. Jaishankar has also indulged in his own share of “wolf-warrior diplomacy,” not unlike his counterparts in Beijing. In response to questions over India’s burgeoning energy imports from Russia, Jaishankar recently said, “I suspect, looking at the figures, probably our total purchases for the month would be less than what Europe does in an afternoon.”

But policymakers in Brussels appear to have calculated that India’s ties with Russia are likely to be less dangerous in the broader global power game than China’s ties, owing not least to the vast power disparity between Beijing and New Delhi. In 2020, China’s trade with Russia amounted to almost $50 billion. India’s trade, by contrast, was less than $9 billion.

China’s defense trade with Russia has also taken off in the last five years, unlike India’s falling dependence on Russian weaponry. And more recently, China has begun expanding its military presence worldwide, which would make a partnership with Putin all the more threatening to Europe. Last week, von der Leyen signed a deal in New Delhi to set up a joint trade and technology council — a monumental development that came after 15 years of painful negotiation. India is now only the second country after the U.S. with whom the EU has set up such an arrangement — to conduct strategic coordination on trade, technology and security. France is already rapidly supplanting Russia’s dominant position in India’s defense market.

Yet, for India to be a viable economic alternative to China in the long run, much will depend on New Delhi’s ability to produce sustained economic growth, build an export base, and establish social harmony and political stability.

For years, India’s economy has struggled to touch the high growth rates that it once enjoyed in the aftermath of the economic reforms of the early 1990s. The pandemic has also threatened to waste its demographic dividend, as millions of children exited the education system. More recently, several parts of India — including its capital city — have suffered debilitating bouts of communal violence and a collapse in law and order.

No foreign investor ever makes a bet without a certain level of confidence in a country’s political and social climate and faith in its law and order system. Insofar as a long-term opportunity with the EU is concerned, the ball is therefore in Prime Minister Narendra Modi’s court.