Body From 1980s Homicide Is Found in Barrel at Lake Mead 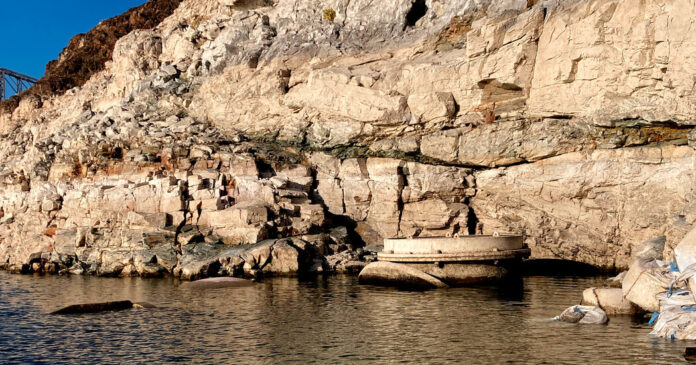 A metal barrel containing the remains of a person killed in the 1980s was found on Sunday on the shore of Nevada’s Lake Mead, a discovery that the Las Vegas Metropolitan Police Department said was made possible by an ongoing drought.

“It’s really odd in the sense that had the lake never receded, we would never have discovered the body,” Lt. Ray Spencer of the Police Department said by phone on Monday.

Lieutenant Spencer said the police were trying to learn the victim’s identity. He declined to share details about the victim, including a possible age, sex or specific cause of death. It’s clear that the person “died as a result of a homicide,” he said, but he would not share how that was determined.

Based on items recovered inside the barrel, investigators believe the victim was killed in the 1980s, Lieutenant Spencer said. He declined to say what those items were.

The drop in the lake’s water level could result in other bodies being found at the lake, Lieutenant Spencer said. Rangers with the National Park Service find one or two bodies at Lake Mead every year, he said, “so it’s not uncommon to work a homicide out at the lake.”

Experts at the University of Nevada, Las Vegas, will help them identify the remains and determine the age of the barrel’s metal, Lieutenant Spencer said.

Since the victim was killed in the 1980s in an area near Las Vegas, where mob-connected casinos dominated the Strip, investigators will “definitely not rule out” that the killing may have been Mafia-related, Lieutenant Spencer said.

“We are going to look at that potential possibility,” he said.

The barrel was discovered about 3 p.m. on Sunday afternoon by people walking along the shoreline of Lake Mead — America’s largest man-made reservoir, which is about 40 miles east of Las Vegas and was formed by the construction of Hoover Dam.

They saw the corroded, rusted barrel embedded in mud, its beige exterior covered in barnacles, Lieutenant Spencer said. While the sun shined on nearby boaters floating in the water, they peeked their heads inside and discovered a skeleton.

“We were docking our boat to go home and heard a woman scream,” Shawna Hollister, a witness to the discovery, told KLAS-TV in Las Vegas. “My husband walked over and found the body. His shirt and belt were the only thing we could see over his decomposing bones.”

Photos of the barrel obtained by KLAS-TV show it on its side, close to the receding shoreline, with a boat floating in the background.

The investigation could take years because the police are starting “at square one,” Lieutenant Spencer said.

“In the 1980s, we did not have any of the DNA databases, so there was no DNA collection,” he said.

If investigators are able to recover DNA samples from the remains, it will take extensive genealogy work to determine the person’s identity, Lieutenant Spencer said.

Since 2000, the elevation of Lake Mead has dropped by nearly 150 feet because of “drought and climate change,” according to the Southern Nevada Water Authority.

In August, the federal government for the first time declared a water shortage at Lake Mead, triggering cuts in water supply for the region.