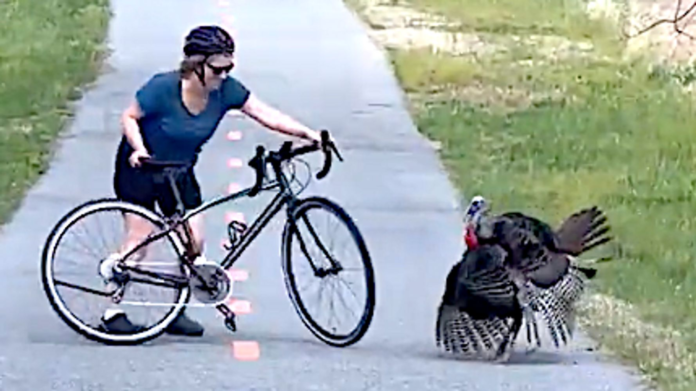 A fearless wild turkey has been attacking walkers, joggers and bikers on a trail in Washington, D.C., causing a flap.

Several people have reported being chased, slammed into, clawed and pecked in encounters with the big bird on the Anacostia Riverwalk Trail in the northeast section of the district.

The turkey came for musician DeDe Folarin last month as he rode his bike through the area.

“He jumped in the air and he almost clawed my face,” Folarin told local WJLA TV. “He kind of knocked me off the bike and literally chased me around for like five minutes.”

When the turkey took off after another biker, Folarin recorded the confrontation on his cell phone — and then chased the bird off with a stick when the woman under attack called to him for help.

Ok this is insane …

After our story aired last night about a wild turkey attacking people on the Anacostia Riverwalk Trail in DC, @DeDefolarin of the incredible @REWickedestBand sent me this video of a turkey attack he shot earlier this month. Never seen anything like this!! pic.twitter.com/L6HcyolK5u

Prince George County Parks and Recreation Department has put up a sign to discourage people from approaching the turkey.

“Some people don’t listen,” Victor Davila of the parks agency told WJLA. “They try to go up to it and take pictures and stuff like that.”

“There is an element of humor to it,” Dan Rauch, a D.C. Department of Energy and Environment wildlife biologist trying to catch the bird, told The Wall Street Journal. “There is a terror turkey stalking a river trail. If I hadn’t seen the videos myself, I would have thought it was an urban myth.”

Wild turkeys are making a comeback across the nation. But encounters with humans can be problematic. Males fiercely guard their territories and may also be protecting nests in the spring. They can scratch and bruise people, and puncture skin with their beaks and claws.

One victim of the D.C. bird reported in February on a local blog: “A wild turkey that attacked me on the Anacostia trail last night. I ended up at urgent care with puncture wounds on my legs and I had to get a tetanus shot and antibiotics. It was terrifying.”

The tom is apparently becoming increasingly aggressive. Park guide Joe Cashman first encountered the bird with another guide last fall while they biked through the area.

The plan now is to capture the turkey and relocate it. But the bird sometimes high-tails it across the Maryland state line, and takes flight when he sees nets, Cashman pointed out.

In the meantime, Folarin said he’s been “prepping myself for the next turkey attack.”