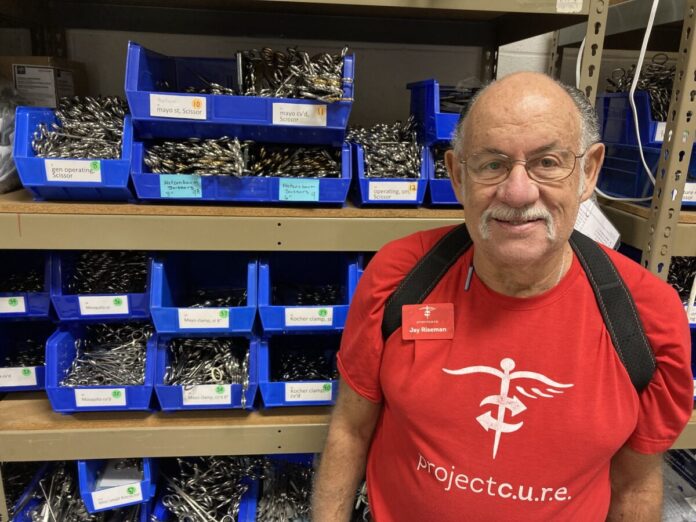 PHOENIX, Ariz.—Over the past 30 years, retired surgeon Jay Alan Riseman has been to 11 countries as a medical volunteer, but never has he seen a greater need than in Ukraine.

“Much greater,” said Riseman as he prepared boxes of donated surgical instruments at Project CURE’s (Commission on Urgent Relief and Equipment) Phoenix location, where he and his wife Mary are regular volunteers.

Two, sometimes three days a week, the Risemans volunteer at the Phoenix warehouse in any way they can.

Their sense of urgency is also great.

“I feel like we’re helping to change the world. The world can be a cruel place [and] we’ve seen some horrible areas. If we can give back, we want to give back what we can,” Riseman said.

The Risemans have been doing medical missions since 1992, hoping to put a lifetime of experience to work.

“We had a bunch of surgical instruments in our garage. So we came in and donated them—about two or three boxes—to Project CURE. We were here volunteering the next week,” Riseman said.

Since the Russians invaded Ukraine in February, Project CURE and other United States-based charitable nonprofits have worked to provide humanitarian aid to Ukraine’s civilian population.

“Project CURE will continue to provide humanitarian assistance to the people of Ukraine and will be on standby to assist with any requests we receive for assistance,” according to Project CURE’s website.

As of April 19, the organization had shipped 230 pallets of medical supplies to Ukraine from its seven distribution facilities in the United States.

Special equipment containing a cardiac ultrasound to a children’s hospital in Ukraine was among these items. Large quantities of trauma and surgical supplies are currently awaiting shipment from Denver, Houston, and Kansas City locations.

“Requests have shifted from field trauma supplies to a surgical-specific focus [which] will be the primary focus for upcoming medical relief deliveries,” the organization stated.

Ruth Sanchez, executive director of the Phoenix location, said there is no shortage of donations despite some items being short supply.

Inside the 40,000-square-foot warehouse, volunteers worked diligently on April 19 packing boxes of bio-medical equipment, ensuring quality, and checking for expiration dates. Millions of dollars worth of vital supplies.

“Everyone that comes into our warehouse is a volunteer,” Sanchez said. Before COVID-19, “we probably had 8,000 just in Arizona—25,000 across the seven chapters. We’re always looking for more.”

Many items are bound for Ukraine. The organization also ships to 137 other countries and has 36 projects in motion.

Ukraine is its primary mission.

“I think with Ukraine and what’s happening with the war, a lot of our partners, like hospitals, are giving us even more supplies,” Sanchez said.

“I tell my other projects, don’t worry, we’re focused on you. Your container did not become not important. We have to juggle to make sure the needs are taken care of. There’s a lot of suffering—a lot of suffering.”

Following the Russian invasion, Project CURE Phoenix made two or three shipments by air freight. The organization is working with “multiple Ukrainian partners” to ensure the delivery of future shipments.

Other disaster relief nonprofits are also raising money and humanitarian assistance to help displaced Ukrainians living in and near the war zone.

UNICEF, for example, said it needs $10 million to support families with children in the eastern region of Ukraine where much of the fighting is taking place.

Nova Ukraine, another charitable nonprofit, reported raising $20 million as of April 26 while serving 960,000 meals and over 106,000 aid packages for Ukrainian civilians.

The Global Empowerment Mission said it placed 2,143 individuals in temporary housing since the war began and delivered $840,000 worth of medical supplies.

“Ukraine is the biggest need right now,” Sanchez said of Project CURE’s global mission. “I would say [it’s] very urgent. We’re dealing with personal, tragic stories from people saying their son is in the army and if I don’t get a call from him, I panic. They don’t have access to even the hospital because it was bombed.”

“So, we hear first-hand a lot of what is happening out there [in Ukraine]. We’ve been sending containers for over 10 years to Ukraine and to that region, which includes Kosovo and Poland,” Sanchez said.

Volunteers are an integral part of the organization’s work, with over 146,000 hours donated annually.

“My volunteer volume has tripled. There’s a lot of people that want to help,” said a Project CURE Phoenix employee, who wished to remain anonymous.

She said that many items now in high demand include tourniquets and special equipment to treat bone fractures and field-related injuries.

These items will prove crucial as the war enters its next phase in the Donbas region of eastern Ukraine, which is why Sanchez said volunteers arrive daily, wanting to work with “anything Ukraine.”

“When you’re in this calling, you have a big humanitarian heart. When I think of Ukraine, I think of how can we do more—but it’s a big burden.”