Mayorkas Says DHS Preparing for Surge in Immigrants After Title 42 Ends, Warns ‘Do Not Come’ 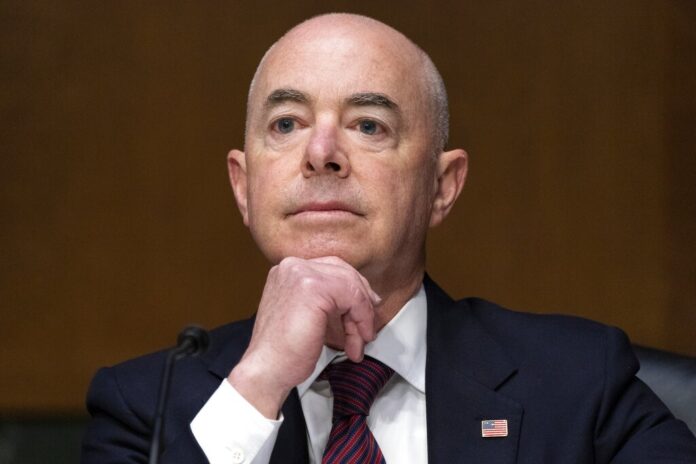 Homeland Security Secretary Alejandro Mayorkas said on Sunday that his agency is preparing for a possible flood of immigrants attempting to enter the United States through its southern border when Title 42 border restrictions are lifted later this month.

The Trump-era Title 42 policy allowed Border Patrol agents to turn illegal aliens back to Mexico immediately if they were deemed to pose a health threat amid the COVID-19 pandemic.

However, the Biden administration announced in April that the emergency order would be terminated in May, citing an increase in tools used to combat the spread of the virus such as vaccinations.

This has prompted fears among some lawmakers, border officers, local residents, and officials that law enforcement will now see a surge in illegal immigrants allowed to enter from the southern border in the coming months, at a time when the United States is already experiencing a border crisis.

Mayorkas appeared on CNN’s “State of the Union” on Sunday where he warned immigrants not to attempt to enter via the southern border, while noting that his department is “prepared” for an influx in migrants.

“Because our border is not open,” Mayorkas said. “What happens now is individuals are either expelled under the Title 42 authority or they are placed in immigration enforcement proceedings. And they are removed if they do not have a valid claim under our law to remain.”

When asked what message he has for immigrants considering entering the U.S. illegally at the border, the secretary replied: “Do not come.”

Mayorkas also stressed that DHS is prepared for a surge in immigrants at the border, citing a 20-page memorandum released last week which contains six “pillars” that officials are already putting into place ahead of the expected surge in migrants.

“It is our responsibility to be prepared for different scenarios, and that is what we are doing, and we have incredibly talented and dedicated people,” the DHS secretary said.

“That is why the plan we have prepared calls for a number of different actions, not just in the domestic arena but also with our partners in the south,” he added.

However, Mayorkas acknowledged that if a record-breaking number of migrants are encountered on the U.S.-Mexico border daily—which DHS estimated could be 18,000 by the time the powers are terminated, up from 13,000 in early 2021—this would put a “strain on the system.”

“There is no question that if we reach that number, that is going to be an extraordinary strain on our system, but we are preparing for it,” Mayorkas said.

Mayorkas was previously asked by lawmakers on Wednesday during hearings on Capitol Hill in Washington if he believes it is time to end the controversial Title 42 restrictions.

“Our responsibility in the Department of Homeland Security is to implement the Title 42 authority of the CDC at our border and to implement it effectively and judiciously according to the law,” he said. “We are mindful that there can be an increase in migratory flows encountered at our southern border should Title 42 come to an end, as the CDC has determined it needs to do by May 23. Our responsibility, therefore, is to prepare and plan for that eventuality.”

Mayorkas’ latest remarks come after a federal judge on April 27 temporarily blocked the Biden administration from lifting Title 42, at the request of 21 states, including Arizona and Missouri.

U.S. District Judge Robert Summerhays, a Trump appointee, said in a temporary restraining order that the plaintiffs “have established a substantial threat of immediate and irreparable injury resulting from the early implementation of Title 42, including unrecoverable costs on healthcare, law enforcement, detention, education, and other services for migrants, and further that the balance of harms and the public interest both favor issuance of a temporary restraining order.”

The block remains in place for two weeks, unless it is further extended by the judge.