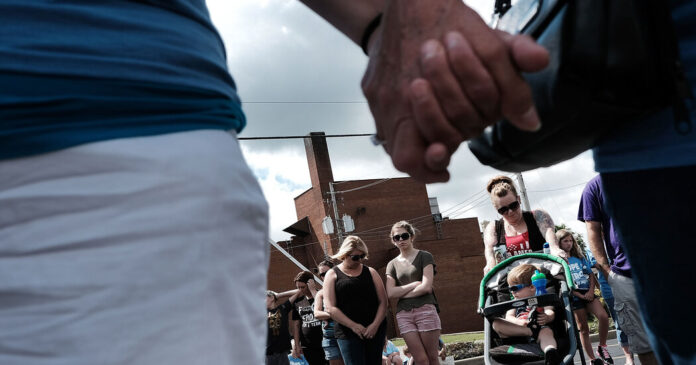 CLEVELAND — The homestretch of Ohio’s contentious Republican Senate primary has revealed a party united in its conviction that American values, indeed the nation’s way of life, are under attack, but divided on whether to embrace a strict isolationism to address its mounting misgivings about global interconnectedness and American leadership abroad.

That divide has played out in policy differences — some subtle, others glaring — in the candidates’ approach to the economy, immigration and foreign policy. The strains reflect the broader splits in a party undergoing something of an identity crisis, with ideological conservatives, the old Republican establishment of big business, and the Trump-inspired newer rank and file all pulling in different directions.

At the same time, Republicans have been searching for ways to relate to former President Donald J. Trump himself: a few by taking tentative steps away from him, others by falling in line with him wholeheartedly.

All of the candidates competing in the primary on Tuesday appear united in their fierce opposition to the Biden administration, as they have sought to paint a nation grappling with rising food and energy prices, a “radical” Democratic Party overreaching on issues of race and gender, and what they describe as apocalyptic conditions at the U.S.-Mexico border.

But the world beyond Mexico may be the brightest dividing line in the Republican Party, with conservatives split on what to do about Russian aggression, how far to distance the United States from its traditional alliances, and above all what to do about China, at once the nation’s biggest competitor and one of its largest economic partners.

Over the past weeks, Josh Mandel, Ohio’s former treasurer and the onetime front-runner in the Senate primary, attacked a rival, Mike Gibbons, for making money off investments in China. J.D. Vance, the author and venture capital executive, attacked Mr. Mandel for accepting the help of the Club for Growth, the business-backed political group which he said supported business relations with China. And the sole woman in the race, Jane Timken, shares her last name with a company that is synonymous with Ohio manufacturing might — and that includes vast operations out of Shanghai.

Whoever wins Tuesday will have to deal with those divisions in the coming general election campaign, especially since the presumed Democratic candidate, Representative Tim Ryan, has no qualms about blasting China while backing U.S. involvement elsewhere.

“Voters don’t always have long memories here, especially after a primary campaign, but certainly the anti-China feelings are going to resonate for a long time,” said Paul Beck, a professor emeritus of political science at Ohio State University and a longtime Ohio politics watcher. “They are hard-wired.”

Divisions over the border are not so stark. Anger at Mexican criminal organizations that are distributing fentanyl to the north has become particularly salient in a state that has been ground zero for the national opioid crisis and experienced some of the country’s highest overdose rates over the past three years.

Mr. Vance, who won Mr. Trump’s coveted endorsement, has even suggested, with a straight face but no evidence, that President Biden was intentionally allowing fentanyl into the country because of its potential to kill Republican voters, bringing the issue back to his mother, who as a nurse became addicted to pain medication. Fentanyl deaths did rise sharply in 2021, but they rose sharply in 2020 as well.

“My family was very affected and is still very affected by the fentanyl that comes across the U.S. southern border into Ohio and into all parts of our country,” he told an audience in Newark, Ohio, on Saturday. “I believe that if the poison coming across the Mexican border today had been coming across 10 years ago, I would have lost my mother.”

Much of the debate and bluster on the border has been lacking in substance and filled with conjecture, with candidates proposing few policy solutions, conflating immigration and crime and resorting to language that dehumanizes unauthorized immigrants.

But beneath the hard-right rhetoric, subtle differences can be seen between the pro-business, establishment Republicans of the past and the ascendant hard right.

In stump speeches and a much-criticized campaign ad, Mr. Vance has falsely declared that people are entering the country to vote for Democrats. He has said he is in favor of an immigration process that creates legal paths to entering the country based on merit, rather than on familial ties, long a key feature of the nation’s immigration system. And he opposes H-1B visas that allow employers to temporarily hire immigrant workers in various industries.

At the other end of the issue is Matt Dolan, an Ohio state senator who has sought to put some distance between himself and the former president. Mr. Dolan, too, talks tough on immigration and the need to stop the flow of fentanyl. But he is just as concerned about economic development, supporting tax cuts, training for workers and reduced regulations for small businesses. And he favors the immigrant work visas, saying businesses rely on them.

“We have to secure the border first — that has to be number one,” Mr. Dolan said in an interview last week. “And then improve our legal immigration.”

Perhaps the most glaring examples in Ohio of the forces warring within the Republican Party have unfolded over competition with China, the war in Ukraine and American leadership abroad. Again setting himself apart, Mr. Vance has argued against deepening American involvement on Ukraine’s behalf — despite what many see as the gravest threat to world order in decades.

Mr. Vance opposed the establishment of a European-led no-fly zone over Ukraine, and has drawn criticism for a statement he made in February in which he said he did not “really care what happens to Ukraine one way or another.” He has since sought to assure audiences he feels Ukrainians’ pain, but has doubled down on his stance against U.S. intervention.

“At the end of the day, however tragic we find these images of what is going on in Ukraine, this is not our fight,” Mr. Vance said in a debate last month.

The distinctions could also be seen in the surrogates the Ohio candidates brought in to campaign with them in the final stretch.

Mr. Mandel chose as his wingman for the final weekend Senator Ted Cruz, Republican of Texas, who in 2016 was Mr. Trump’s biggest threat and remains fiercely conservative in ways the former president never was. Mr. Cruz has consistently attacked Mr. Biden as weak on foreign policy, going so far as to blame him for Russia’s invasion of Ukraine. And Mr. Cruz, like Republican congressional leaders, has shied away from some of Mr. Trump’s broader attacks on corporate America — especially the pharmaceutical industry — which often echoed Democratic talking points.

Mr. Vance, by contrast, stumped over the weekend with two of the most polarizing figures of the far right: Representatives Marjorie Taylor Greene of Georgia and Matt Gaetz of Florida. Ms. Greene railed against the “forever wars” started under George W. Bush and talked up what she called “the civil war in the G.O.P.,” while Mr. Gaetz blasted the leaders of his own party and said he and Ms. Greene needed backup in Washington — backup that Mr. Vance would provide.

Mr. Gibbons, for his part, campaigned with Senator Rand Paul, the Kentuckian who espouses small government, low taxes and the avoidance of foreign entanglements at all cost. And Mr. Gibbons embraced a fringe movement to hold a constitutional convention aimed at curbing federal power, and mocked the Department of Homeland Security’s new effort to counter disinformation as an Orwellian Ministry of Truth.

One area in which there is broad agreement among the party’s Senate candidates is on the conservative values many Ohio Republicans say they hold dear, from old standbys like support for gun rights and opposition to abortion, to current causes like preventing transgender women from playing women’s sports and giving parents greater control over how race and gender are taught in schools.

On those issues, consensus among the candidates was so fully realized that voters at events in Cleveland seemed widely split over whom to support, and many were still undecided.

In Port Clinton, where Ms. Timken, Mr. Gibbons and Mr. Dolan all worked the crowd at a Knights of Columbus chicken barbecue lunch, Lisa Slobodzian said she was still sifting through her direct mail and studying the candidates’ positions.

“I want power back to the people,” said Ms. Slobodzian, 57, a retired national parks ranger and law enforcement specialist, digging into her plate. “They should decide what their kids are taught in schools, and not some government agency.”