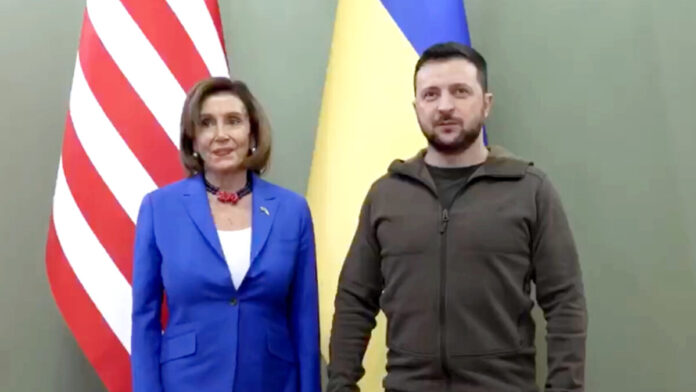 The latest on the Russia–Ukraine crisis, May 1. Click here for updates from April 20.

U.S. Speaker of the House Nancy Pelosi has met with Ukraine’s president.

Zelenskyy told the delegation: “You all are welcome.”

Pelosi later said: “We believe that we are visiting you to say thank you for your fight for freedom. We are on a frontier of freedom and your fight is a fight for everyone. Our commitment is to be there for you until the fight is done.”

The visit was not previously announced.

U.S. Secretary of State Antony Blinken says American diplomats are making plans to return to Ukraine as soon as possible.

Blinken made the comment while speaking to Ukrainian Foreign Minister Dmytro Kuleba. An overnight statement Sunday said Blinken told Kuleba that America “plans to return to Kyiv as soon as possible.”

He said diplomats had been making “initial visits” to Lviv to prepare.

The U.S. evacuated its embassy in Kyiv in February just before Russia launched its war on the country.

The United States had been bringing diplomats across the Polish border each day to work in Lviv, a city in western Ukraine some 470 kilometers (290 miles) away, before stopping the practice.

Lviv has largely been spared in the conflict, though a missile strike several days ago targeted a railroad facility near the city.

The United States is one of Ukraine’s main backers in the war, providing billions in aid and weaponry.