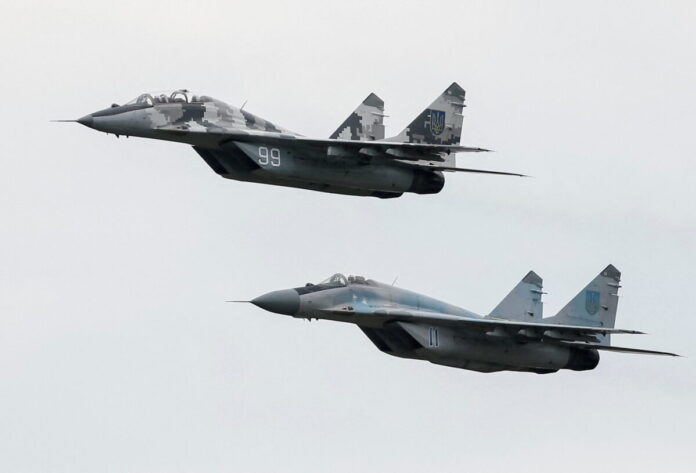 The mysterious Ukrainian war hero hailed as the “Ghost of Kyiv” not only didn’t die in combat, but also wasn’t real, the Ukrainian military has said.

The unsubstantiated tale about an anonymous Ukrainian fighter jet pilot who allegedly took down six Russian warplanes in one day has been circulating on social media since the early days of Russia’s full-scale military offensive against Ukraine. The story gained major media attention and was perpetuated by official Ukrainian social media channels, including Twitter accounts of the Ukrainian government and former president Petro Poroshenko.

“People call him the Ghost of Kyiv, and rightly so,” Ukrainian government wrote on Twitter on Feb. 27. “This UAF ace dominates the skies over our capital and country, and has already become a nightmare for invading Russian aircrafts.”

Over the past two months, many people questioned whether the “Ghost” was real. But it wasn’t until the supposed death of the Ghost made news headlines that the Ukrainian military came out and admitted there never was such a person.

Last week, The Times of London identified the Ghost as Stepan Tarabalka, a 29-year-old man flying a MiG-29 fighter jet. According to the report, Tarabalka had shot down as many as 40 Russian aircraft until he was “overwhelmed” by the enemy forces and killed on March 13.

The report prompted the Ukrainian Air Force to clarify that Tarabilka did die in a battle, but he was definitely not the “Ghost of Kyiv,” which is but a fictional character created to boost Ukrainian morale in their conflict against Russians.

“Stepan Tarabilka is not a ‘Ghost of Kiev’ and he did not shoot down 40 planes,” UAF spokesman Yuriy Ignat told The NY Times. “On March 13, 2022, Major Stepan Tarabilka heroically died in an air battle with the superior forces of the Russian occupiers.”

“The ‘Ghost of Kyiv’ is a superhero legend who was created by the Ukrainians! This is rather a collective image of the pilots of the 40th Tactical Aviation Brigade defending the sky of the capital. Which suddenly appear where they are not expected.”

In another Facebook post, Ukraine’s Air Force Command again confirmed that “the Ghost of Kyiv is a superhero-legend.”

“Hero of Ukraine Stepan Tarabalka is NOT ‘Ghost of Kyiv’ and he did NOT shoot down 40 planes,” the post reads.

The story comes as Ukraine continues to ask the United States to provide American fighter jets, such as F-16s, to help deny Russian air advantage over Ukrainian skies. Senior Pentagon officials said, however, that Ukraine has an air force that “relies principally” on Russian-made aircraft, and F-16s are not yet a part of America’s aid plan.

“We have been providing and helping coordinate from other nations that have the kinds of aircraft that the Ukrainians fly,” a senior defense officials said at an April 28 press conference, referring to former members of the Eastern Bloc and their Soviet-era jets.

“I’m not going to speculate about future aircraft deliveries one way or the other. Again, this is an Air Force that relies principally on old Soviet aircraft, that’s what they’re used to flying, that’s what they’ve got in their fleet,” the official said.