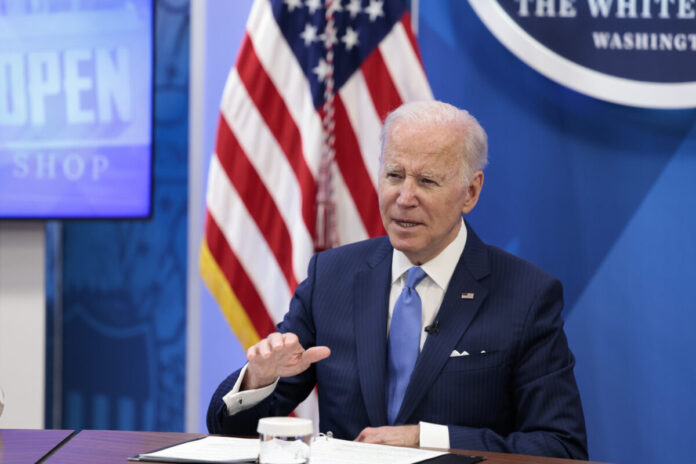 A year ago, President Joe Biden was riding the polls with a 59 percent approval rating having just signed what he called the “American Rescue Plan” (ARP), a stimulus package that the administration promised would “provide direct relief to the Americans, contain COVID-19 and, rescue the economy.”

A year later, having approved the $1.9 trillion ARP spending plan and another $1 trillion of spending on infrastructure, the American economy has contracted, raising the specter of high inflation and low growth known as “stagflation,” as Biden struggles with popularity.

In the first quarter, the economy shrank 1.4 percent, said the Commerce Department on April 28.

Previously, economists expected growth of 1.8 percent for the quarter, according to figures at the Philadelphia Federal Reserve.

It may leave many people wondering how, after approving nearly $3 trillion in spending measures in 2021, the economy could be in retreat.

One man, who was appointed by President Bill Clinton and served under President George W. Bush as head of the Government Accountability Office (GAO), thinks he knows how.

“The dramatic increase in alleged COVID-related spending was a primary contributor to stimulating the economy in 2021 but it also stoked excess inflation,” David Walker, who was appointed Comptroller General in 1998, told The Epoch Times.

And while energy prices were trending higher under Biden, the first-quarter increase in 2022 represented the type of fuel price spike that country has not seen since just prior to the 2008 market crash.

Depending on whom one believes, Biden either will or will not allow oil and gas drilling on Federal lands to help alleviate price pressures on consumers, which doesn’t exactly make drillers feel confident that the long-term expense of drilling new wells is justified.

Americans too may also be growing weary of “head fakes” as the country recovers from COVID-19.

Consumer confidence, which is the key to consumer spending, has taken a steep nose dive recently, dropping below the lowest number it posted during the worst of the COVID-19 crisis, according to figures by Gallup, the polling organization.

“76% of Americans say the economy is getting worse, 20% say it is improving, and 3% think it is staying the same,” said Gallup.

The high cost of living, the economy in general, and fuel prices lead consumer concerns, as inflation rises to its highest level since 1981, the survey said.

Overall, the country committed about $4.6 trillion to COVID-19 relief measures, with $3.6 trillion paid out already, according to data by the Treasury Department.

That’s a lot of money to spend in just two years, especially when compared to the Obama stimulus plan that spent $787 billion over a four-year period.

Approving more money to spend to create more economic activity risks making inflation worse, but analysts note that politicians have a hard time doing nothing amid a crisis in an election year, even if the things they do create even more damage.

“Biden certainly isn’t helping things,” Walker said, adding that the administration’s measures have hurt the economy, such as bans on oil domestic oil exploration, federal mandates that have led to job losses, and economic disruption.

Policymakers at this point have few good choices, some say, which tends to be the case when inflation spikes in an uncontrolled frenzy.

“There is a serious conundrum as prudent measures to quell inflation might push the world into a recessionary situation while measures to stimulate growth and fight contraction might cause inflation to spiral recklessly out of control,” Bryan Slusarchuk, a precious metals mining operator, told The Epoch Times.

Already, GOP campaigns are sharpening daggers, using the combination of slow economic growth and high prices, as the tip of what could be a dangerous weapon against Democrats in the midterms.

“Democrats’ reckless spending is bringing us back to the Carter years of a shrinking economy and soaring inflation,” said Mike Berg, deputy communications director at the National Republican Congressional Committee on April 28, warning about “stagflation.”

Other experts, including Biden critics, are taking a more wait-and-see approach, saying that the first-quarter contraction could be just a temporary downturn. First-quarter GDP performances are notoriously difficult to gauge because of weather and other factors.

“I try not to read too much into one month or one quarter of data. Maybe it’s a blip. Maybe it’s the effect of various bad policies. Maybe it’s a pandemic hangover,” Dan Mitchell, a free-market economist and co-founder of the Center for Freedom and Prosperity, told The Epoch Times.

Mitchell added that everyone should be thankful that Biden didn’t get his social spending package, known as “Build Back Better,” passed in the fall, or things could be worse.

“The threat of Biden’s so-called Build Back Better has probably had a negative effect since businesses, investors and entrepreneurs don’t know whether it will still be profitable to create new jobs,” said Mitchell.

Student Loans Could Add to Inflation

And things could be that much worse if Biden follows through with his rumored plan to forgive up to $1.6 trillion in student loans, which in effect would be no different than if Biden approved any other spending bill for $1.6 trillion, conservatives warn.

“[E]ven a modest increase in inflationary pressures [caused by student debt cancellation] could feed into current inflation dynamics, increasing the risk of a wage-price spiral and making it harder for the Federal Reserve to re-anchor inflation expectations around its current target,” said the Committee for a Responsible Federal Budget, a Washington-based nonprofit.

The contraction in GDP may signal the end of the inflationary spiral, but with a trillion dollars in unspent COVID-19 relief and a range of options for Biden to cancel student debt, there still may be enough fuel to keep inflation raging, even as the economy slows, a textbook case of stagflation.

Still, some say that the track record of economists and politicians who are now reassuring people there is nothing to worry about is anything but reassuring.

“If the Biden administration wanted to fight stagflation, it would be cutting red tape, encouraging business activity and investment and slashing federal spending. But it’s not doing that,” Reynolds added.

Instead, Biden is saying that “technical factors” led to a one-time drop in GDP, and he is hoping the economy and his poll numbers will rebound.

John Ransom is a freelance reporter covering U.S. news for The Epoch Times.