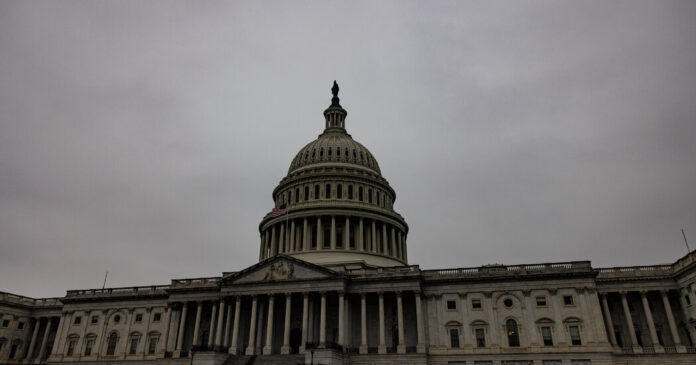 WASHINGTON — The Equal Act would appear to be a slam dunk even in a badly divided Congress.

The legislation, which aims to end a longstanding racial disparity in federal prison sentences for drug possession, passed the House overwhelmingly last year, with more than 360 votes. It has been enthusiastically embraced on the left and right and by law enforcement as a long-overdue fix for a biased policy. It has filibuster-proof bipartisan support in the Senate and the endorsement of President Biden and the Justice Department.

Yet with control of Congress at stake and Republicans weaponizing a law-and-order message against Democrats in their midterm election campaigns, the fate of the measure is in doubt. Democrats worry that bringing it up would allow Republicans to demand a series of votes that could make them look soft on crime and lax on immigration — risks they are reluctant to take months before they face voters.

Even the measure’s Republican backers concede that bringing it to the floor could lead to an array of difficult votes.

“I assume the topic opens itself pretty wide,” said Senator Roy Blunt, Republican of Missouri, who became the 11th member of his party to sign on to the Equal Act this month, giving its supporters more than the 60 votes needed to overcome procedural obstacles.

The drug legislation is not the only bipartisan bill caught in a midterm political squeeze. A multibillion-dollar Covid relief package has been languishing for weeks, as Republicans insist that consideration of the measure must include a vote on retaining pandemic-era immigration restrictions that the Biden administration wants to lift.

Democrats are increasingly at odds with the administration over its plan to wind down the public-health rule, known as Title 42. A vote would underscore that division and potentially open some of them to a politically difficult vote.

The uncertainty surrounding the bipartisan bills is a clear sign that if legislating on Capitol Hill is not already done for the year, that moment is fast approaching.

Given the calendar, virtually any legislation that reaches the floor is bound to attract trouble. Even consensus measures are at risk unless enough supporters in both parties agree to band together to reject politically difficult votes that could lend themselves to 30-second attack ads — the kind of deal that grows more difficult to reach each passing day.

There are exceptions. A request by Mr. Biden this week to send an additional $33 billion in aid to Ukraine to bolster the war effort is expected to draw broad bipartisan support and little dispute. Democrats are still hopeful they may be able to salvage pieces of a hulking social safety net and climate package under special rules that allow them to move forward without Republican support. But that, too, could require a series of votes orchestrated by the G.O.P. to make Democrats squirm.

A Guide to the 2022 Midterm Elections

“What’s hurting bipartisanship is that even when there’s enough Republican support to pass a bill, the hard-right militants sabotage it to score political points, and gridlock prevails,” said Senator Chuck Schumer, Democrat of New York and the majority leader. “But there’s always hope that cooler heads prevail, and occasionally they do.”

Backers of the Equal Act and other criminal justice legislation said they hoped that was true for them. They insist that they can still get their bill passed this year, and that opposition will backfire politically.

“This is a real opportunity for bipartisan achievement to eliminate one of the worst vestiges of injustice from American drug policy,” said Holly Harris, the president and executive director of the Justice Action Network and a leading proponent of criminal justice changes. “Those who seek to thwart this opportunity for 15 minutes of fame, five minutes of fame — I don’t think that’s going to be rewarded by voters.”

In a letter to Senate leaders this week, Ms. Harris’s group and about 50 law enforcement, progressive and conservative organizations urged them to quickly take up the legislation, saying that “we cannot miss this moment to right this decades-long wrong.”

The legislation would eliminate the current 18-to-1 disparity in sentencing for crack cocaine versus powder. The policy that can be traced to the “war on drugs” mind-set of the 1980s, which treated those trafficking in crack cocaine more harshly. It resulted in a disproportionate number of Black Americans facing longer sentences for drug offenses than white Americans, who were usually arrested with the powder version.

As a senator, Mr. Biden was one of the champions of the policy; it has since become widely discredited, and he has disavowed it.

The United States Sentencing Commission has said that passage of the legislation could reduce the sentences of more than 7,600 federal prisoners. The average 14-year sentence would be cut by about six years, it estimated.

Though Mr. Schumer endorsed the legislation in April, he has not laid out a timeline for bringing it to the floor. Democrats say he is giving backers of the bill a chance to build additional support and find a way to advance the measure without causing a floor fight that could take weeks — time that Democrats do not have if they want to continue to win approval of new judges and take care of other business before the end of the year.

“Getting the opportunity is the challenge,” said Senator Richard J. Durbin, Democrat of Illinois and one of the original sponsors of the legislation. “We just don’t move many free-standing bills which involve some controversy.”

Its supporters say that they recognize the difficulties but believe that it is the single piece of criminal justice legislation with a chance of reaching the president’s desk in the current political environment.

“Of all the criminal justice bills, this is the one that is set up for success right now,” said Inimai Chettiar, the federal director for the Justice Action Network. “It is not going to be easy on the floor, but I think it is doable.”

The problem is that the push comes as top Republicans have made clear that they intend to try to capitalize on public concern about increasing crime in the battle for Senate and House control in November.

The approach was crystallized in their attacks on Judge Ketanji Brown Jackson during her Supreme Court confirmation hearings last month, as they accused her of leniency in sentencing. Given the rise in crime and drug overdoses, some Republicans say they are also having second thoughts about the landmark First Step Act, a sweeping bipartisan law passed in 2018 that freed thousands from prison after their sentences were reduced in a bid to ease mass incarceration.

Senator Mitch McConnell, the Kentucky Republican and minority leader, this week reprised his criticism of Judge Jackson and attacked Mr. Biden for having issued his first round of pardons and commutations, including for those convicted of drug crimes.

“They never miss an opportunity to send the wrong signal,” he said of Democrats.

Senator Tom Cotton, the Arkansas Republican who led the opposition to the First Step Act, said he was in no mood to let the Equal Act sail through. He has said that if the disparity is to be erased, penalties for powder cocaine should be increased.

The legislation encountered another complication on Thursday, when Senators Charles E. Grassley of Iowa and Mike Lee of Utah, two top Republican supporters of the previous criminal justice overhaul, introduced a competing bill that would reduce — but not eliminate — the sentencing disparity between crack and powder cocaine. They said that research showed that crack traffickers were more likely to return to crime and carry deadly weapons.

“Our legislation will significantly reduce this disparity while ensuring those more likely to reoffend face appropriate penalties,” said Mr. Grassley, the top Republican on the Judiciary Committee.

Sponsors of the Equal Act say they intend to push forward and remain optimistic that they can overcome the difficulties.

“We’ve got an amazing bill, and we’ve got 11 Republicans and people want to get this done,” said Senator Cory Booker, Democrat of New Jersey and the lead sponsor of the legislation. “My hope is that we are going to have a shot to get this done right now.”

Ms. Harris said that Democrats must recognize Republicans will attack them as soft on crime regardless of whether they act on the measure.

“They are fearing something that is already happening,” she said. “Why not dig in, stay true to your principles, and do what is right for the American people? Maybe, just maybe, the politics will shake out.”