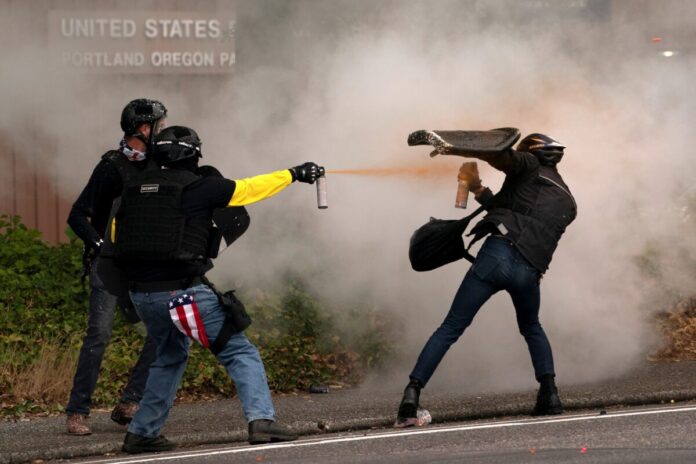 A member of the Proud Boys organization has pleaded guilty to a felony charge for obstructing law enforcement officers during the Jan. 6, 2021, Capitol breach.

Louis Enrique Colon, 45, from Blue Springs, Missouri, pleaded guilty to civil disorder in the District of Columbia, according to an April 27 news release by the Department of Justice. On the day of the attack, “Colon and others proceeded past the police barricades and onto the Capitol’s West Plaza. He climbed a wall to gain access to a higher level of the Capitol’s exterior and unlawfully entered the building at approximately 2 p.m.”

“While inside the Capitol, Colon obstructed police officers who were attempting to lower retractable doors to stop rioters from proceeding further into a portion of the building. Colon used his hands to stop one door and placed a chair in its path. He remained in the Capitol building until about 2:50 p.m.”

Colon and other members of the group, which describes itself as a “pro-Western fraternal organization for men who refuse to apologize for creating the modern world, aka Western Chauvinists,” had started planning for a Jan. 6 visit to Washington beginning around December 2020.

During his trip to Washington, Colon brought along a handgun. However, he did not take the gun to Washington. On Jan. 5, Colon bought and modified an ax handle to use as a weapon and a walking stick.

On Jan. 6, Colon joined with a large group of Proud Boys members and marched to the Capitol, heading to the west side of the grounds while wearing a backpack, tactical gloves, tactical vest, boots, a helmet with orange tape, and carrying a pocket knife.

Colon was arrested on Feb. 11, 2021. A federal district court will judge his sentencing later this year. He faces a maximum prison term of five years and a fine of up to $250,000.

Colon is the latest among Proud Boy members to plead guilty to actions related to the Jan. 6 attack. On April 8, Charles Donohoe of North Carolina, who is a chapter leader at the organization, pleaded guilty to two charges—conspiracy to obstruct an official proceeding and assaulting, resisting, or impeding certain officers. He faces up to 28 years in prison, fines of up to $250,000, and a term of supervised release of up to six years.

“Mr. Donohoe regrets his actions and is remorseful for the conduct that led to these charges. He accepts responsibility for his wrongdoing and is prepared to accept the consequences,” Lisa Costner, the defendant’s public defender, told The Epoch Times in an email.

In the 15 months since the Capitol breach, almost 800 individuals have been arrested for crimes related to the incident, out of which more than 250 have been charged with impeding or assaulting law enforcement.