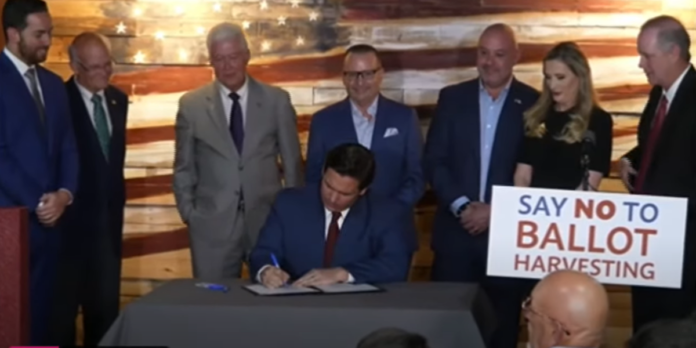 During a packed April 25 press conference in Spring Hill, Florida, Gov. Ron DeSantis signed Senate Bill 524 into law, strengthening voting rules in the state and establishing the nation’s first Office of Election Crimes and Security at the Department of State, specifically formed to investigate and prosecute voter fraud.

While most legacy media news reports insist claims of voter fraud in the 2020 election are “unsubstantiated,” “false,” “baseless,” “unfounded,” or outright lies that have been “debunked,” other reports are surfacing with evidence of widespread fraud through ballot harvesting, the process of third-party volunteers collecting ballots and delivering them to local election offices or ballot drop boxes.

In an interview with The New York Post, Hans von Spakovsky, a former member of the Federal Election Commission, said much of the ballot harvesting operation in the 2020 election was funded by Facebook founder Mark Zuckerberg’s “carefully orchestrated” $400 million-plus campaign to “convert official government election offices into get-out-the-vote operations for one political party and to insert political operatives into election offices in order to influence and manipulate the outcome of the election.”

And in the new documentary film “2000 Mules,” premiering May 2 and May 4 in select theaters, author and director Dinesh D’Souza presents video evidence of a coordinated effort to harvest ballots and manipulate election results in key swing states during the 2020 election.

On May 6, 2021, DeSantis signed into law Senate Bill 90 (pdf), which strengthened voter ID rules, prohibited the mass mailing of unsolicited ballots, banned ballot harvesting, and prohibited the use of private donations—dubbed by DeSantis as “Zuckerbucks”—from being used to administer elections in the state.

While SB90 effectively banned ballot harvesting in the state of Florida, DeSantis said there was still concern that the penalties were not “severe enough,” and that a misdemeanor wasn’t a sufficient deterrent.

“In this bill we actually increase penalties for ballot harvesting,” he said on April 25, noting that “if you ballot harvest in the state of Florida, this is now a third-degree felony that you can be hit with.”

The measure the governor signed into law April 25 strengthens voter ID rules for mail-in ballots, requires the Department of State to develop more secure vote-by-mail ballot envelopes, and requires supervisors of election offices to clean their voter rolls every year.

While most people report suspected cases of voter fraud directly to their local Supervisor of Elections Office, DeSantis noted that supervisors and staff in these offices “aren’t investigators or law enforcement.” In fact, he noted how some supervisors “don’t seem to care” how their elections are conducted, and some—such as former Broward County Supervisor of Elections Brenda Snipes—are themselves allegedly part of the problem.

“Creating for the first time ever, in state government, an office of election crimes and security to be able to prosecute voter fraud” is how DeSantis said the state can gain control.

“Know the rules,” he said. “You can vote absentee. You can vote in person. What you can’t do is collect a bunch of ballots and dump them somewhere.”

Florida state Sen. Wilton Simpson said “the foundation of a free state and a free country are fair and secure elections.” He also said, “voters expect voter rolls to be accurate and their information to be protected.”

“We have more and more people moving in and around the state of Florida every day as well as more out-of-state groups attempting to influence the outcome of our elections,” Simpson said, adding that Florida’s election laws have to keep up with these changes.

“This bill sends a strong message to those who want to stuff ballot boxes or manufacture votes: stay out of Florida,” he said. “Florida is free economically. Florida is free from indoctrination, and Florida will stay free because of fair, transparent, and secure elections.”

During his comments at the press conference, state Rep. Daniel Perez said the number of phone calls, emails, and media requests his office has received is a sign that election integrity is a hot topic.

“When you notice the kickback you’re getting, it means you’re doing the right things on this issue,” he said. To those who ask if Florida really needs a tough election law, and whether it’s necessary to make voter fraud a third-degree felony, Perez said “Yes, yes—hell yes, it is necessary.”

During her comments, Florida Secretary of State Laurel Lee noted how DeSantis made election integrity a priority in his administration from the beginning. As Florida’s chief elections official, Lee said she shares his “strong commitment to elections integrity: Secure, accurate, and timely.”

“I am most excited about the establishment of the Office of Election Crimes and Security at the Department of State,” Lee said, noting that SB 524 was a testament to both the governor’s and the legislature’s commitment to securing Florida elections and providing law enforcement with the resources to investigate all allegations of fraud or impropriety.

She also said the new law will make it possible to investigate physical threats to voters or election officials and will strengthen cyber security.

“We want to ensure that anyone who comes to Florida to engage in elections-related activities is following our law,” Lee said. “In Florida, we make it easy to vote but hard to cheat.”

The Epoch Times spoke to a few of the attendees of the press conference.

Mark Cartwright of Temple Terrace in Tampa told The Epoch Times “DeSantis is the greatest governor the state of Florida has ever had.” He added that, right now, “the liberals are hurting. But they keep trying to take on Florida’s governor.”

Patrick M. Byrne, founder and former CEO of Overstock.com, launched The America Project in April 2021 to fight election fraud. Having built a $2 billion e-commerce company “that people tried to hack a thousand times a day,” Byrne said he understands the nature of cybersecurity.

“There’s no way to make elections secure until we get rid of the machines,” Byrne said. “But I feel this is a wonderful sign of progress. This has been a beautiful step. I’m wholeheartedly enthusiastic.”

“I’m really happy to see them taking steps that we agree are necessary to combat election fraud in the state of Florida, primarily on the ballot side,” Gamble told The Epoch Times. “It’s nice to know they’re shoring up on the cyber side because there are many vectors to election fraud.”

Gamble said The America Project worked with D’Souza on “2000 Mules,” which will explain how fraud works on the “ballot side.”

While he considers this new law to be a good step, Gamble noted that more is still needed.

“We need to make sure we’re out there working with legislators in other states in getting them to adopt the Florida model. It’s really exciting to see DeSantis leading the way yet again on this very important topic.”

Clarice Henderson of Tampa told The Epoch Times she believes what DeSantis is doing is “awesome” and “these are good steps toward election integrity.”

Due to what she feels were a lot of discrepancies in the 2020 election results, Maura Cruz Lenz told The Epoch Times she is happy that “DeSantis is enforcing the law.”

Calvin Wimbish, who is running for a seat in the the U.S. House of Representatives, said “Governor DeSantis is the best thing since sliced bread.”

Wimbish, who lives in Orange County, said “votes were stolen” in 2020 and that by signing SB 524, DeSantis will ensure that every legal ballot cast in Florida will be counted.

“We’ve been needing this for a long time,” he said. “It’s time to stop the steal.”

The Epoch Times reached out to the Florida Department of State (DOS) to obtain more details about the types of reported fraud they receive and the benefits this new law will provide to the state.

“The Office of Election Crimes and Security will provide the necessary resources and specialization to ensure that our elections law in Florida are followed [sic], voters remain secure in casting their ballot, our infrastructure remains secure, and that perpetrators of elections-related crimes are investigated and, where appropriate, prosecuted,” Mark R. Ard, director of external affairs at the Florida Department of State, told The Epoch Times in an emailed statement.

Ard explained that since 2019, over 23,000 people have registered as petition gatherers in Florida. Those 23,000 people are now delivering hundreds of thousands of petitions to their local election offices for review. Some supervisors of elections are reporting that fewer than 50 percent of those petitions can be validated.

“There are registered petition gatherers right now, in our state, who have forged signatures of voters who did not consent to support an issue or sign a petition,” Ard stated, noting that one supervisor of elections and his wife “had their identity stolen and used on Petition forms they never signed.”

Ard also noted the threats of violence, saying election officials and their staff have been subjected to harassment, threats of violence, and intimidation which, in some instances, may constitute criminal conduct. The DOS has also received complaints of abuse of the elderly at nursing homes, alleging that residents are victims of undue influence or have had unauthorized changes made to their voting records.

“Governor DeSantis has recognized the need to support and fund these important statutory responsibilities of the Department of State,” Ard said. “By creating the Office of Election Crimes and Security, Governor DeSantis has recognized that the Florida Department of State has statutory responsibility to fulfill this important role and must be funded and staffed commensurately in order to do so.”

According to the DOS website, the department received 262 official Elections Fraud Complaint forms in 2020 and referred 75 of them to law enforcement or prosecuting authorities.

“My message,” DeSantis said during the press conference, “is I don’t think there’s any place in the country where you can have more confidence that your vote counts than in the state of Florida.”

Steven Kovac contributed to this report.