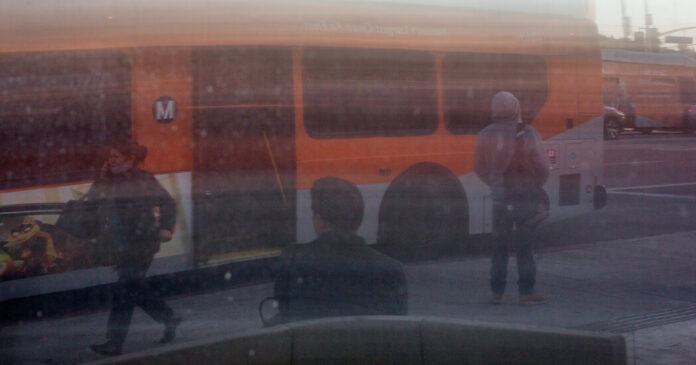 Ever since pandemic lockdowns ground life in American cities to an almost complete standstill more than two years ago, big questions have swirled about the future of urban centers: Will the workers who once populated cities return to offices, bringing vitality back with them? Who wants to live downtown? And can they afford it?

Many of these questions are entwined with the fate of public transit systems, which have long been buffeted by the same broad trends affecting the cities they serve. As my colleagues and I reported this week, that means cities are trying to figure out how to make people feel safe riding subways, commuter trains and buses amid rising crime and violence.

Across the country, transit officials and experts highlighted a fundamental dilemma: Riders feel more vulnerable when fewer people are around. So after ridership plunged because of the pandemic, worries about crime have made it difficult to coax passengers back. Stations and bus stops are emptier, which creates a kind of self-perpetuating cycle.

On many transit systems, including Bay Area Rapid Transit and Los Angeles Metro, data that we got reflected a similar complicated dynamic. While the raw number of crimes reported on those systems has decreased during the pandemic, ridership has also plunged, which has led to increased crime rates.

In California, discussions about safety and public transit have long intersected with debates over policing. After a BART police officer shot and killed Oscar Grant III as he lay on the Fruitvale Station platform in the early hours of 2009, demonstrators flooded Oakland’s streets in mass protests over police violence that predated by more than a decade the nationwide movement that followed the murder of George Floyd.

More recently, as the housing crisis consuming California, the nation’s most populous state, has deepened, public transit systems have also become flash points for fights over how to address visible poverty and homelessness. The pandemic has only heightened tensions.

While high-profile attacks by people who are homeless in public spaces have led to fear and calls for increased police presence in those places, many officials and advocates have said that people living on the streets are the ones at far greater risk of harm, and that using police resources to merely move them out of stations or off buses is inefficient.

Instead, they’ve called to spend more money on unarmed workers and to improve transit service, including by increasing the frequency of trains or buses, in order to entice riders.

“What people want to see on transit is transit personnel,” Darrell Owens, an East Bay Transit Riders Union member and transit advocate, told me. “No one wants to feel alone in a station.”

He added that transit system officials should work to make stations thriving destinations with shops and restaurants. He cited the example of train stations in Japan, where stations are bustling at all hours, and where station workers help direct lost riders and can call for law enforcement help if necessary.

Officials with both BART and the Los Angeles County Metropolitan Transportation Authority told me they hoped to expand or start programs aimed at dispatching more unarmed workers to help connect homeless people with services, or to intervene if someone is experiencing a mental health crisis.

Still, they said, police officers must be visible on transit.

“What we’re looking for is not to eliminate the presence of armed officers, but also to have adequately trained public safety officers,” said Hilda Solis, a Los Angeles County supervisor who is also chair of the Los Angeles Metro board of directors. “That’s not only for law enforcement on Metro, that’s for the whole city.”

If you read one story, make it this

But in the days after the Jan. 6, 2021, attack on the Capitol, both men privately blasted Trump, with McCarthy going so far as to say he would push him to resign.

Today’s tip comes from Elizabeth Smyth, who recommends the snowmobile parks in the Lassen National Forest:

“Each winter of my childhood my parents and grandparents would load us up into a caravan of trailered trucks and make the trek. While I’m the odd family member who isn’t a huge fan of snowmobiling, even just walking around to bird watch is breathtaking. There are also warming huts at many of the parks, so all you need is firewood and some hot chocolate to make for a lovely day.”

How are you feeling about the latest mask rules for public transit in your area?

Email us at CAtoday@nytimes.com with your thoughts.

California condors hadn’t been seen in the northern part of the state in more than a century; the state’s big, native birds were for many years on the brink of extinction. Now, with help from a partnership between the state and federal governments with the Yurok tribe, four young birds are set to usher in a new era when they take to the skies.

“For countless generations, the Yurok people have upheld a sacred responsibility to maintain balance in the natural world,” Joseph L. James, the tribe’s chairman, told The Guardian. “Condor reintroduction is a real-life manifestation of our cultural commitment to restore and protect the planet for future generations.”

Thanks for reading. We’ll be back tomorrow.

Soumya Karlamangla, Jonah Candelario and Jack Kramer contributed to California Today. You can reach the team at CAtoday@nytimes.com.