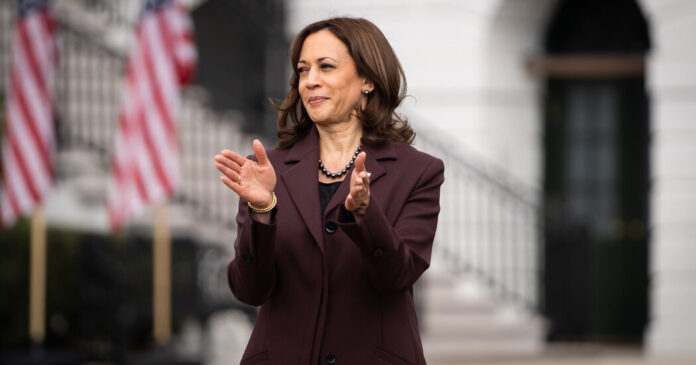 WASHINGTON — Vice President Kamala Harris tested positive for the coronavirus on Tuesday, becoming the latest high-ranking official in Washington to be infected amid renewed concern about President Biden’s potential exposure as the virus ripples through his administration.

Ms. Harris received her test results shortly after returning to the White House following several days in California, then left the West Wing without seeing Mr. Biden to isolate at the vice president’s residence. While she typically sees the president most weekdays they are both in town, aides said she had not been with him in person in eight days.

Two Democratic senators, Ron Wyden of Oregon and Christopher S. Murphy of Connecticut, also tested positive on Tuesday, depriving Democrats of a working majority to push through legislation or nominations for the next few days. In an evenly split Senate, Democrats need every member plus the vice president’s tiebreaking vote to overcome uniform Republican opposition.

Senate Democrats had hoped to approve multiple nominations this week, including Lisa D. Cook to be a governor of the Federal Reserve and Alvaro Bedoya to be a member of the Federal Trade Commission. Given that neither received any Republican support during earlier procedural votes, the latest Covid absences scrambled the equation for Democrats.

While Ms. Harris by happenstance has not been near Mr. Biden in recent days, her infection served as a reminder of the dangers for Mr. Biden, who at 79 is the oldest person ever sworn into the presidency and in an age group considered more vulnerable to the virus. He has been traveling and appearing in public more lately, including three trips out of town last week, which increases his potential exposure, and aides on Tuesday sounded resigned to the prospect that he may be infected eventually.

“It is possible he could test positive for Covid, just like any American,” said Jen Psaki, the White House press secretary. “Even though he’s double-boosted, that is possible. And we will be very transparent if that were to take place.”

She said the president and his staff make a risk assessment for his travels outside the White House and he has proceeded lately with trips that he considers “vitally important to him, to his presidency, to the American people.”

Mr. Biden plans to deliver a eulogy for former Secretary of State Madeleine K. Albright at a memorial service on Wednesday at Washington National Cathedral, where he will be among an estimated 1,400 mourners, including former Presidents Bill Clinton and Barack Obama and former Secretary of State Hillary Clinton. Mr. Biden is also scheduled to attend the White House Correspondents’ Association annual dinner on Saturday night, along with more than 2,500 officials and journalists in a basement hotel ballroom.

The most recent of these big Washington grip-and-grin dinners led to an extensive outbreak that swept through much of the capital’s elite. At least 80 guests at the Gridiron Dinner last month tested positive afterward, including House Speaker Nancy Pelosi and two members of Mr. Biden’s cabinet, Attorney General Merrick B. Garland and Commerce Secretary Gina Raimondo.

Ms. Harris was not at the dinner, but her communications director, Jamal Simmons, attended and tested positive afterward. The infections of both the vice president and House speaker mean that the first and second in line of succession to the presidency have now been hit by the virus in short order.

Ms. Harris, 57, received her second booster shot on April 1, three days after federal regulators authorized a second dose of the vaccine for people over age 50. It takes about a week for a shot to boost the immune system. Mr. Biden has also received a second booster shot. The last time the two were together was on April 18, according to a White House official.

Ms. Harris, who returned from a trip to San Francisco and Los Angeles on Monday, went to her office at the White House on Tuesday morning and took a rapid antigen test as part of the regular protocol for the president and vice president. When it came back positive, she took a P.C.R. test, which also came back positive. At that point, rather than attend the daily intelligence briefing with the president as scheduled, she returned home, where aides said she would remain until she tests negative. Mr. Biden later called to check in on her, aides said.

Doug Emhoff, Ms. Harris’s husband, tested positive for the virus in mid-March. At the time, Ms. Harris was forced to back out of an event with the president, although she continued to test negative. Mr. Emhoff told McClatchy News last week that he had isolated from his wife for 10 days while infected, staying in an upstairs room and having food brought up to him.

The spate of infections in the upper reaches of Washington came amid the spread of the highly contagious Omicron subvariant known as BA.2, and served as a reminder that the pandemic endures even as officials seek to roll back restrictions.

Officials in the White House said they were contact tracing to determine who may have been near Ms. Harris in recent days. The Centers for Disease Control and Prevention defines a close contact as someone who spends at least 15 minutes within six feet of the infected person over a 24-hour period. Officials have repeatedly emphasized that the White House maintains stricter measures than the C.D.C. advises.