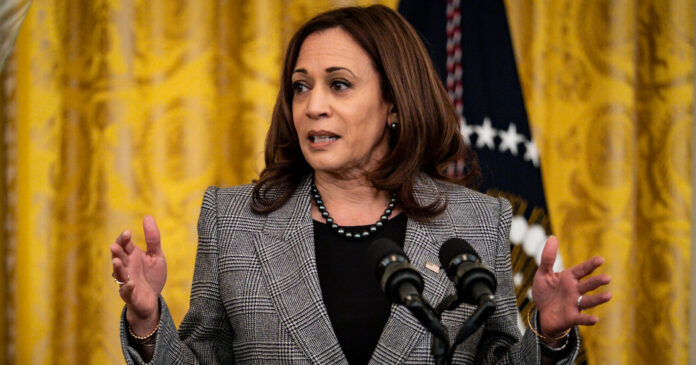 WASHINGTON — Vice President Kamala Harris tested positive for the coronavirus on Tuesday, becoming the highest-ranking official in Washington to be infected and raising new concerns about President Biden’s potential exposure as the virus tears through his administration.

“She has exhibited no symptoms, will isolate and continue to work from the Vice President’s residence,” said Kirsten Allen, the vice president’s spokeswoman. “She has not been a close contact to the president or first lady due to their respective recent travel schedules.”

Ms. Harris, 57, is the latest in a string of Washington officials to contract the virus recently, now including, with Speaker Nancy Pelosi, the top two successors to the presidency. Her infection renews concerns about Mr. Biden, who at 79 is the oldest person ever sworn into the presidency and in an age group typically considered more vulnerable to the virus. While the vice president’s office emphasized that she had not been in close contact with Mr. Biden lately, her infection reinforces the potential for his exposure as people who work with him regularly test positive.

The spate of infections in the upper reaches of Washington comes amid the spread of the highly contagious Omicron subvariant known as BA.2, and serves as a reminder that the pandemic endures even as officials seek to pivot away from restrictions. Ms. Pelosi and two cabinet members, Attorney General Merrick B. Garland and Commerce Secretary Gina Raimondo, all tested positive this month.

Mr. Garland and Ms. Raimondo were among several officials testing positive who had recently attended the Gridiron Club dinner, a black-tie affair where journalists, administration officials and lawmakers mingle.

Ms. Harris was not at the dinner, but her communications director, Jamal Simmons, was and tested positive afterward.

At the time, Ms. Allen, Ms. Harris’s press secretary, said in a statement that the vice president would continue with her public schedule, but follow guidance from the Centers for Disease Control and Prevention for those who have been in close contact with someone infected. The guidelines advise wearing a mask for 10 days after exposure, and testing regularly.

The White House has repeatedly emphasized that it maintains stricter measures than the C.D.C. advises.

Ms. Harris received her second booster shot on April 1, three days after federal regulators authorized a second dose of the vaccine for people over age 50. It takes about a week to boost the immune system after a shot.

Doug Emhoff, Ms. Harris’s husband, tested positive for the virus in mid-March. At the time, Ms. Harris was forced to back out of an event with the president, though she continued to test negative.