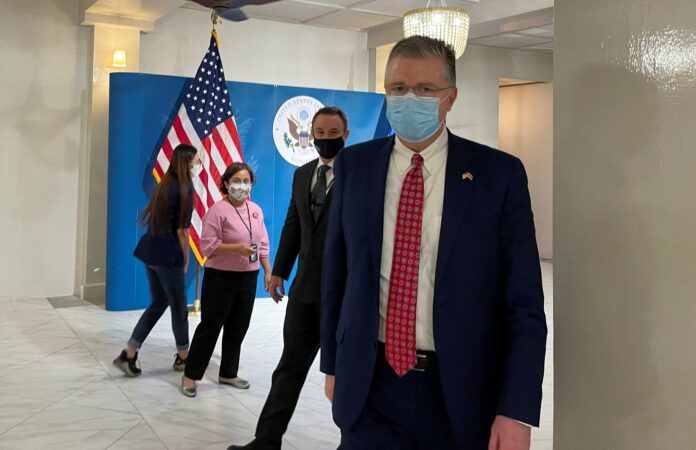 The United States voiced concerns Tuesday over a “complete lack of transparency” surrounding a new security deal between the Solomon Islands and China and vowed to respond to any attempt to establish a Chinese military base in the island nation.

A draft copy of the security pact leaked onto social media in late March but neither party has made public the deal, reportedly signed by Chinese Foreign Minister Wang Yi and his Solomon Islands counterpart Jeremiah Manele.

The deal has drawn expressions of deep concern from U.S. allies Australia and New Zealand that it could enable China to extend its military reach in the Pacific. It also prompted a hasty visit to the Pacific by two top U.S. diplomats.

Kritenbrink told journalists at a teleconference on Tuesday that the lack of transparency of the security agreement was “our fundamental concern.”

“I think it’s clear that only a handful of people in a very small circle have seen this agreement, and the prime minister himself has been quoted publicly as saying he would only share the details with China’s permission, which I think is a source of concern as well,” the U.S senior diplomat said.

“Of course we have respect for the Solomon Islands’ sovereignty, but we also wanted to let them know that if steps were taken to establish a de facto permanent military presence, power-projection capabilities, or a military installation, then we would have significant concerns and we would very naturally respond to those concerns,” Kritenbrink said.

The assistant secretary of state declined to elaborate on possible responses to security implications caused by the new agreement but said that Prime Minister Sogavare gave the U.S. three specific assurances that “there would be no military base, no long-term presence, no power-projection capability.”

In Washington, during a Tuesday hearing of the Senate Foreign Relations Committee, Republican Sen. Mitt Romney called the agreement “alarming.”  In response, U.S. Secretary of State Antony Blinken said he shared the senator’s concern. He reiterated the assurances the U.S. delegation had gotten from Sogavare, adding: “We will be watching that very, very closely in the weeks and months ahead.”

Sogavare’s words have done little to calm Solomon Islands’ neighbors. Australian Prime Minister Scott Morrison said that a military base would be a “red line” for Canberra. The Solomons occupies a remote but strategic location in the western Pacific, about 1,700 kilometers (1,050 miles) from the northeastern coast of Australia.

Malcolm Davis, a senior analyst at the Australian Strategic Policy Institute (ASPI), said: “I think now that the security agreement has been officially signed, there is little the U.S. or Australia can do to reverse it. The key question now is how fast will China move to establish a permanent presence, leading to a base, in the Solomon Islands.”

“Australia and the U.S. can try to use diplomacy to convince the Sogavare government to not allow this base to be established quickly, or to constrain its size and function, but there is little chance that these efforts will succeed, as it’s clear that Sogavare has aligned with China,” Davis said.

“They can also try to contain Chinese influence in the region further by ‘stepping up’ the ‘Pacific Step Up’ and making it more effective,” he said, referring to the Biden administration’s push to increase U.S. engagement in the region. He added: “This has greater chance of success given the regional concern about the agreement signed between Solomon Islands and China.”

Norah Huang, associate research fellow at Prospect Foundation, a Taiwanese think tank, described the deal as “opportunism” by the Solomons prime minister. She said the best response might be “candid talks with the governing parties in private to walk it back or at least neutralize the deal.”

“But Australia, the U.S. and New Zealand should be careful not to reward those who play opportunism,” Huang said.

Japan became the latest regional power to send a representative to the Solomon Islands to express concern over the security pact. According to Japanese Foreign Minister Yoshimasa Hayashi, the Solomons prime minister repeated assurances to Japanese officials on Tuesday that he had no intention of allowing China to build military bases in his country, Reuters reported.

Davis at ASPI said the China-Solomons deal could presage a move by Beijing to extend its reach in the South Pacific.

“I think the greatest risk is that China would choose to extend its influence into Papua New Guinea, where it already has substantial investment, and is openly talking about a ‘fishing facility’ at Daru Island, which could ultimately be the basis for a port that could support Chinese Coast Guard vessels,” he said.

“The U.S. and Australia, as well as New Zealand, will now need to adjust their defense policies with the prospect of a forward Chinese military presence in the Southwest Pacific that certainly dramatically increases the military threat to the Australian eastern seaboard, but also severs the sea lane of communication between Australia and the United States,” the defense analyst said.

‘Too little, too late’

There have been calls in Australia’s political and defense circles to “prepare for war,” and Davis said there should be some review of Australian defense force posture, and greater investment into air, sea, and space capabilities across the Coral Sea.

Yet the efforts by the U.S. and allies “may be too little, too late,” said Andy Mok, senior research fellow at the Center for China and Globalization in Beijing.

The U.S. has abandoned its embassy in Honiara for nearly 30 years and only now is talking about re-opening it.

“In the Pacific, the U.S. seems to be pursuing a strategy of denial towards China. If China seeks something, the U.S. will attempt to prevent China from achieving it even if it is for the greater good,” said Mok.

Chinese officials maintain that the security cooperation between China and Solomon Islands “is based on equality and mutual benefits.”

Foreign Ministry’s spokesman Wang Wenbin retaliated on Monday to the criticism about the lack of transparency behind the security deal with the Solomon Islands, referring to “the AUKUS security partnership that is neither open nor transparent.”

AUKUS is a newly-established security grouping between Australia, the United Kingdom and the United States. China has criticized it as fueling militarization in the Indo-Pacific.

While denying that China will build a military base in the Solomon Islands, calling it “pure disinformation,” Wang said the nearly 800 U.S. bases across the world “have long been of major concern.”

“When will the U.S. shut down those bases?” he asked.