Texas’ Busing of Migrants to D.C. Isn’t Having Abbott’s Intended Effect Yet 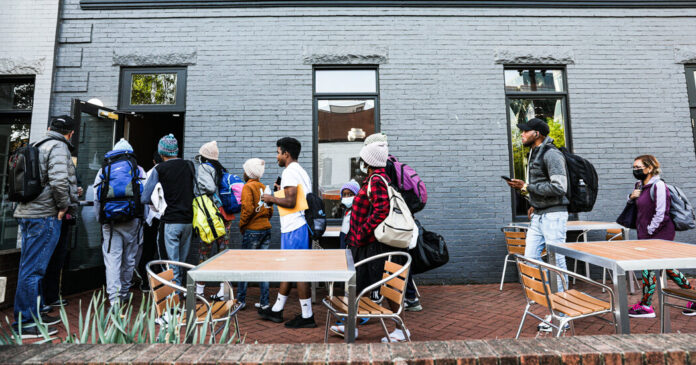 WASHINGTON — Gov. Greg Abbott of Texas devised a plan this month to rattle the Biden administration by busing migrants from the southwest border to the nation’s capital during a period of record crossings.

So far, though, the plan has not resulted in the chaos that Mr. Abbott predicted.

“I would like to say thank you to the governor of Texas,” Chadrack Mboyo-Bola, 26, said on Thursday morning, after he and 13 other migrants stepped off one of the chartered buses that had provided a 33-hour ride paid for by the State of Texas. Blocks from the U.S. Capitol, they were greeted by volunteers who would help them reach their desired destinations around the country to await their day in immigration court.

Three days earlier, Mr. Mboyo-Bola and his family had crossed into the United States from Mexico along the border in Central Texas after an eight-week journey from Brazil. After spending a day in Border Patrol custody in Eagle Pass, Texas, they and about 20 other new immigrants accepted an offer to board a Washington-bound bus in nearby Del Rio.

Mr. Abbott says his goal is to draw attention to what he and other Republicans describe as the failed immigration policies of President Biden during a period of record crossings along the southwest border.

“The decision and the action to bus people from border communities was to alleviate the strain that’s put on the local communities along the border,” the governor said at a news conference on Thursday. “I’m going to take the border to President Biden.”

Mr. Abbott’s plan, however, happens to fit into the Biden administration’s strategy for responding to the surge in migrant crossings, which officials anticipate will increase sharply once a public health rule imposed during the coronavirus pandemic is lifted at the end of May. The Biden plan includes working with state and local governments and nonprofits to provide support, assistance and transportation to move migrants out of border communities and toward their final destinations in a humane and orderly way.

“In a way, it’s actually perfect,” said Bilal Askaryar, a spokesman for Welcome With Dignity, a collective of about 100 local and national groups that help migrants. “Unintentionally, Governor Abbott sent them to one of the best places in the nation to welcome people.”

In truth, the migrants that Texas is sending to Washington are coming voluntarily and are only a fraction of the thousands crossing the border daily. As of Monday, Mr. Abbott had sent about 195 migrants who volunteered for the trip to Washington since the first bus arrived on April 13, though more were en route. Mr. Mboyo-Bola’s bus was the eighth from Texas; by Friday, two more had arrived. The Texas Division of Emergency Management has been chartering the buses, according to Mr. Abbott’s office.

Abel Nuñez, the executive director of the Central American Resource Center, a Washington-based nonprofit that helps immigrants find legal aid and housing, said the grass-roots volunteer effort would not be sufficient if Washington was going to become a way station for many more migrants coming straight from the border. Without help, the new immigrants would be left in an unfamiliar city and might not have the means or know-how to reach their final destination, instead perhaps having to camp out on the streets or bus stations.

For now, though, the numbers remain modest. As the migrants who arrived on Thursday met with volunteers at a nearby church-owned coffee shop, eight others waited at a respite center in Del Rio, Texas — a small town that made national headlines when thousands of migrants huddled in squalid conditions under a bridge there last fall — to board another free bus.

“I am very thankful to the governor. His help is very much welcomed,” said Reydel Grau, a Cuban who traveled three weeks to reach the United States. With holes in his pockets and little left of the $1,300 he had saved for his trip, he said the word “free” was music to his ears.

Mr. Grau pointed his cellphone camera during a FaceTime call at an imposing charter bus behind him and marveled at its size. “It looks like an airplane,” he said, beaming.

Santo Linarte López, a migrant from Nicaragua, had only $45 left from the $1,500 he had raised for his monthlong trip to the U.S. border. He said he did not understand why Mr. Abbott was paying for him to travel north, but he was grateful.

“Imagine, how much would it cost to get from here to all the way over there,” he said, referring to North Carolina, where he planned to meet a relative.

Hundreds of migrants arrive daily at the respite center in Del Rio, which is run by the Val Verde Border Humanitarian Coalition and provides meals, free Wi-Fi, access to landline phones and charging stations, and guidance on how to reach destinations in the United States.

Most of the migrants who go to the center, including most who were there on Thursday morning, buy their own bus tickets, often to San Antonio, where they connect to transportation to their final destination.

The free buses have also dropped off some of the migrants in Republican-leaning states along the way, including Alabama, Georgia and North Carolina.

When Mr. Abbott announced his plan, Mr. Askaryar said, advocates in Texas and Washington quickly mobilized. The call for volunteers came from organizations big and small, through religious groups and neighborhood listservs.

A WhatsApp group, whose members include a representative from the mayor’s office in Washington, shares bus information estimated times of arrival in Washington. The Texas governor’s office generally does not reveal when buses are leaving or from where, and there is no advance notice of where the migrants will be dropped off.

“There’s all these advocates here who understand the system and understand the needs,” Mr. Askaryar said. “It might not have been the governor’s intention — I think he clearly wanted to create some kind of chaos — but the reality is that we’re really well prepared and really excited to welcome these people.”

Mr. Abbott, a two-term Republican up for re-election in November, has frequently bristled at the federal government’s sole authority over immigration matters, turning to initiatives like busing and arresting migrants for misdemeanor trespassing to try to wrest some control over enforcement. A recent effort to inspect all commercial vehicles crossing into the state backfired when it led to extensive traffic jams at the border, some as long as 14 hours.

The White House has not directly responded to Mr. Abbott’s bus initiative except to call it a “nice” gesture.

“These are all migrants who have been processed by C.B.P. and are free to travel,” Jen Psaki, the White House press secretary, recently said, referring to Customs and Border Protection, the agency that oversees border operations. “So, it’s nice the State of Texas is helping them get to their final destination.”

Republicans, as well as some Democratic lawmakers facing tough re-election races this fall, have blasted the Biden administration for its plan to end the temporary policy restricting immigration, known as Title 42. Even with the policy still in place, crossings at the southwest border have reached record highs: recently about 8,800 a day on average, according to internal data.

Early on Thursday, about 10 volunteers gathered in front of Union Station in Washington, where they had a good view of where chartered buses typically make drop-offs. Just after 7 a.m., a bus pulled over on Delaware Avenue.

As migrants filed off the bus, volunteers invited them to a pop-up center in the basement of the church-owned coffee shop a few blocks away. One man, Alberto Valdes Garcia, who said he was headed to Louisville, Ky., described the bus ride as “perfect.”

At the coffee house, volunteers — some using translation apps on their phones — asked the newcomers what they needed, fed them, provided clothes and children’s toys, and helped sort their paperwork and make plans for the next leg of their journeys.

The volunteers also provided basic information about U.S. immigration law and emphasized the importance of following the government’s directions — which, for most of the migrants, was to check in with Immigration and Customs Enforcement within 60 days.

The Central American Resource Center arranged and paid for a plane ticket for Mr. Valdes Garcia out of Ronald Reagan National Airport on Thursday night. Amy Fischer, who learned about the volunteer effort through her synagogue, took Mr. Valdes Garcia to a Quaker guesthouse on Capitol Hill where he could relax for a few hours and take a shower. She arranged for another volunteer to take him to the airport and escort him to his plane.

While most of the people who arrived in Washington on Thursday had prearranged plans for people to meet them at their final destination, Mr. Mboyo-Bola, who is originally from Congo, and his family did not. They were going to Portland, Maine, because he had read online that there were several shelters that could house immigrants; many from Africa have settled in the area. Mr. Mboyo-Bola’s government entry papers included the address of the City of Portland Family Shelter, which one of the volunteers called and learned had no room for the family.

“If we send them there, they’re just going to be on the street,” Mr. Nuñez said. “Our job is not to just push this issue to another city.”

Communities along the southwest border have at times been overwhelmed when the government drops off groups of migrants who have nowhere to go at bus stations or other locations.

The volunteers eventually found a licensed foster care family who agreed to host Mr. Mboyo-Bola, his wife and daughter in Washington for a night, while they tried to find somewhere for the family to go and receive support. By Friday, the Central American Resource Center had bought bus tickets to Portland for them and other African migrants who arrived late Thursday. The volunteers reached out to city officials in Portland, who said they would have to try find shelter for them when they arrived.

“We’re going to continue to respond to the best of our ability and try to give people at least some comfort, some instruction of what they need to do,” Mr. Nuñez said. “But in the end, they’re going to have to make their own final decision.”