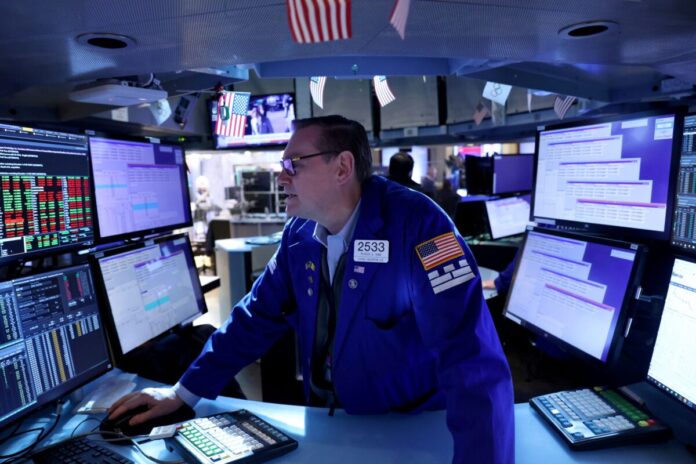 A potential recession is on the horizon, according to an April 25 report from Bloomberg that followed a warning from Morgan Stanley strategists that the S&P 500 will “drop sharply” this year.

Investors are looking to to find financial havens after a steep market drop on April 22 stoked fears of a recession, with news of weak economic data, worsening lockdowns in China, and a more aggressive tightening policy by the Federal Reserve in May.

After Federal Reserve Chairman Jerome Powell endorsed the new policy to tackle rising inflation, many traders immediately took action to price in the half-percentage-point interest-rate increases expected at the bank’s next four meetings.

Powell said on April 21 that a 0.5 percentage point interest rate increase was “on the table” at the next meeting.

The S&P 500 Index had been experiencing a three week slump, declining to the lowest level since mid-March after the nearly 1,000 point tumble on the Dow on April 22 caused investors to acquire low-risk assets amid fears of the new monetary tightening policy and its impact on economic growth.

Despite global stocks falling sharply across the board following the bad news, there was heavy buying of U.S. Treasuries on April 25, as traders bought up the low-risk assets in anticipation of an economic slowdown, causing the dollar and treasuries to rally.

The U.S. dollar index rose 0.4 per cent to its highest point since late March 2020, while yield on the benchmark 10-year Treasury note dropped 0.08 percentage points to 2.82 percent as the price of the debt instrument rose.

Meanwhile, there has been bad news from China with expanding COVID-19 outbreaks, leading the renminbi to fall 1 percent against the dollar.

The CSI 300 index in China closed with a decline of 4.9 percent, after Beijing investors went on a panic buy following fears that the city will face similar authoritarian lockdowns to those implemented in Shanghai.

“The market has been so picked over at this point, it’s not clear where the next rotation lies. In our experience, when that happens, it usually means the overall index is about to fall sharply with almost all stocks falling in unison.”

“As the U.S. economy moves to a late cycle phase and GDP/earnings growth rates decelerate for the overall economy and market, we think Pharma/Biotech’s defensive properties will outweigh policy concern and drive relative performance higher,” they continued.

The U.S. Commerce Department will release a report on April 28 that is expected to show that the U.S. economy grew at an annualized rate of 1 percent in the first quarter of 2022, the weakest results since the pandemic in 2020.