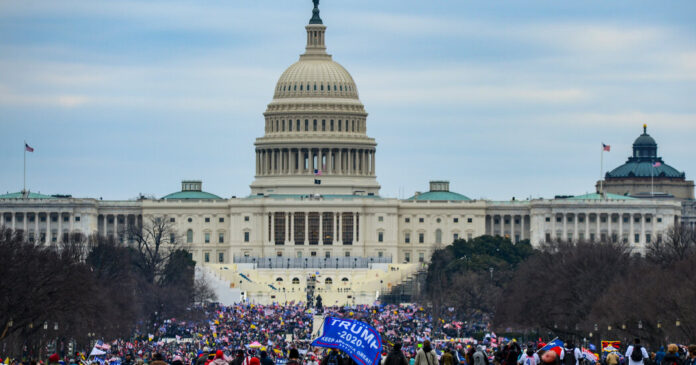 WASHINGTON — It was less than two weeks before President Donald J. Trump’s staunchest allies in Congress would have what they saw as their last chance to overturn the 2020 election, and Representative Scott Perry, Republican of Pennsylvania, was growing anxious.

“Time continues to count down,” he wrote in a text message to Mark Meadows, then the White House chief of staff, adding: “11 days to 1/6 and 25 days to inauguration. We gotta get going!”

It has been clear for more than a year that ultraconservative members of Congress were deeply involved in attempts to keep Mr. Trump in power: They joined baseless lawsuits, spread the lie of widespread election fraud and were among the 147 Republicans who voted on Jan. 6, 2021, against certifying President Biden’s victory in at least one state.

But in a court filing and in text messages obtained by CNN, new pieces of evidence have emerged in recent days fleshing out the degree of their involvement with the Trump White House in strategy sessions, at least one of which included discussions about encouraging Mr. Trump’s supporters to march to the Capitol on Jan. 6, despite warnings of potential violence. Some continued to push to try to keep Mr. Trump in office even after a mob of his supporters attacked the complex.

“In our private chat with only Members, several are saying the only way to save our Republic is for Trump to call for Marshall law,” Representative Majorie Taylor Greene, Republican of Georgia, wrote to Mr. Meadows on Jan. 17, 2021, misspelling the word “martial.”

The revelations underscore how integrated Mr. Trump’s most fervent allies in Congress were into the effort to overturn the election on several fronts, including a scheme to appoint pro-Trump electors from states won by Mr. Biden — even after they were told such a plan was unlawful — and how they strategized to pressure their fellow lawmakers to go along.

The fake electors scheme, the question of how demonstrators at Mr. Trump’s rally on the Ellipse on Jan. 6 were directed toward the Capitol and the plotting in the White House and on Capitol Hill about the potential for Vice President Mike Pence to block or delay certification of the results are at the heart not just of the inquiry by the House select committee on Jan. 6 but also of an expanding criminal inquiry by the Justice Department.

“If there was a level of coordination that was designed not just to exercise First Amendment rights, but to interfere with Congress, as it certified the electoral count, then we’re in a whole different universe,” said Joyce Vance, a law professor at the University of Alabama and a former U.S. attorney. “There’s a difference between assembling and protesting, and trying to interfere with the smooth transfer of power.”

Cassidy Hutchinson, a former aide to Mr. Meadows, told the House committee that she recalled at least 11 members of Congress who were involved in discussions with White House officials about overturning the election, including plans to pressure Mr. Pence to throw out electoral votes from states won by Mr. Biden.

“They felt that he had the authority to — pardon me if my phrasing isn’t correct on this, but — send votes back to the states or the electors back to the states,” Ms. Hutchinson testified, adding that they had appeared to embrace a plan promoted by the conservative lawyer John Eastman that members of both parties have likened to a blueprint for a coup.

Ms. Hutchinson said that Mr. Perry, Mr. Gaetz and Mr. Gohmert were present when White House lawyers told the group that the plan to use so-called alternative electors was not “legally sound,” but that Mr. Meadows allowed it to move forward nonetheless.

Text messages show that Mr. Biggs embraced the plan early on, writing to Mr. Meadows on Nov. 6 that while it was “highly controversial, it can’t be much more controversial than the lunacy that were sitting out there now.”

Mr. Jordan continued to push the strategy to the end, sending a message to Mr. Meadows on Jan. 5: “Vice President Mike Pence, as President of the Senate, should call out all electoral votes that he believes are unconstitutional as no electoral votes at all.”

Mr. Jordan has criticized the Jan. 6 committee for publishing only a partial version of this text that did not make clear he was forwarding the legal advice of a conservative lawyer.

Ms. Hutchinson also testified that in one discussion, Mr. Perry, who now leads the right-wing House Freedom Caucus, endorsed the idea of encouraging supporters to march to the Capitol, and that no one on the call objected to the proposal. She made clear that the members of Congress were “inclined to go with White House guidance” about directing a crowd to the Capitol.

Some Republican members of Congress agreed to speak at rallies outside the building meant to further encourage the disruption of the peaceful transition of power.

Mr. Brooks and Mr. Biggs — both members of the Freedom Caucus — were scheduled to speak on Jan. 6 at a rally planned for the east side of the Capitol by the prominent Stop the Steal organizer Ali Alexander, according to a permit application. The application, dated Dec. 21, 2020, noted that “the MOC” — or members of Congress — “have been confirmed.”

Less than 10 days later, according to an addendum to the permit application, Mr. Alexander filed an expanded list of speakers that included more far-right members of Congress, among them Mr. Gosar, Ms. Boebert and Ms. Greene, who formally took office on Jan. 3, 2021. None of these speakers actually appeared at the event, which was never held because of the violence that erupted at the Capitol.

Mr. Brooks, however, did appear at a public event on Jan. 6, speaking at Mr. Trump’s event at the Ellipse near the White House with body armor underneath his black and yellow jacket.

“Today is the day American patriots start taking down names and kicking ass,” Mr. Brooks told a huge crowd of Mr. Trump’s supporters, adding, “Are you willing to do what it takes to fight for America?”

Warnings of violence. Mark Meadows, Mr. Trump’s former chief of staff, was warned that Jan. 6 could turn violent but he pushed forward with a rally anyway, the House panel investigating the attack alleged in a court filing. The committee also said that Mr. Meadows proceeded with a plan for so-called alternate electors despite being told it wasn’t “legally sound.”

On Dec. 19, for instance, Ms. Greene — who was still not formally sworn in — posted a tweet reinforcing Mr. Trump’s call from only hours earlier for people to descend on Washington on Jan. 6 for a “wild” protest.

“I’m planning a little something myself on January 6th as well,” Ms. Greene wrote, linking to a news article about Mr. Trump’s remarks.

The next day, Ms. Greene posted another tweet in which she called upon her followers to “HOLD THE LINE on Jan. 6.”

To the message, she attached the hashtag “#FightforTrump.”

On Jan. 5, Mr. Gaetz appeared on Fox News and spoke of a plan for “tens of thousands of people potentially marching in the streets in Washington, D.C., tomorrow.”

On the morning of Jan. 6, Ms. Boebert took to Twitter and posted a message that read, “Today is 1776.” The reference to the Revolutionary War was echoed throughout the day by rally organizers and members of the mob that stormed the Capitol.

Mr. Gosar also chimed in on Twitter that day, writing that Mr. Biden should concede and suggesting that he might take action if Mr. Biden would not agree.

“I want his concession on my desk tomorrow morning,” Mr. Gosar wrote. “Don’t make me come over there.”

Once they found themselves in the middle of the chaos at the Capitol, however, some of the same members of Congress who most vocally supported Mr. Trump’s attempts to go to any length to overturn the election called on Mr. Meadows to beg the president to intercede with the mob and stop the violence.

“Mark I was just told there is an active shooter on the first floor of the Capitol,” Ms. Greene said in a text to Mr. Meadows even as the building was under assault. “Please tell the President to calm people This isn’t the way to solve anything.”

They also pivoted quickly to a new lie: that the storming of the Capitol had been carried out not by Trump supporters, but by leftist activists impersonating them.

In the late afternoon that day, Ms. Greene texted Mr. Meadows again, this time writing: “Mark we don’t think these attackers are our people. We think they are Antifa. Dressed like Trump supporters.”

“Cap Police told me last night they’d been warned that today there’d be a lot of Antifa dressed in red Trump shirts & hats & would likely get violent,” Mr. Gohmert said.