Kay Ivey Races to the Right in Alabama Governor Race 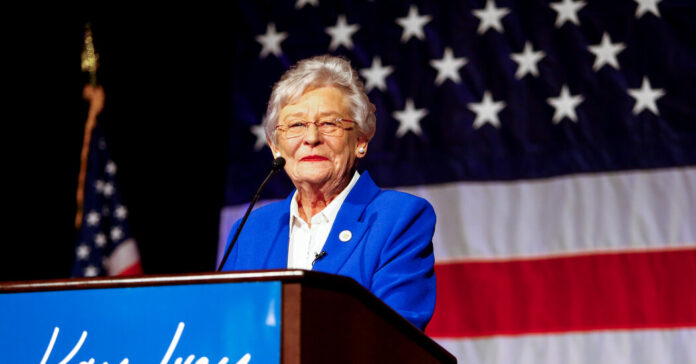 Gov. Kay Ivey of Alabama was never a moderate Republican. But in 2018, when she ran for her first full term, she artfully dipped into conservative talking points in a mild manner.

Four years later, as she runs for re-election, she’s again airing ads with music suitable for 1990s family sitcoms. The message, however, is far different.

In one ad, Ivey claims that “the left teaches kids to hate America.” Later, she boasts that she ended “transgender sports” in Alabama schools. In another ad, she falsely accuses President Biden of “shipping illegal immigrants” into the country, warning that “we’re all going to have to learn Spanish.”

Facing pressure from her right, Ivey has shed her image as a traditional salt-of-the-earth Alabama conservative — leading the charge on restrictive abortion laws and protecting Confederate monuments — and transformed into a Trump-era culture warrior.

Her election-year shift demonstrates how even in the Deep South, Republicans whose loyalty to the party is unquestioned are tilting to the right and making red states even redder.

“Politics is about doing what people like. Statesmanship is about doing what’s right,” said Mike Ball, a longtime Republican state representative who is retiring. “But before you get to be a statesman, you have to be a politician.”

“I do think this campaign has moved her rhetoric too far — or a long way — to the right,” he added, though he still believes that Ivey is the best choice in the May 24 primary, which will head to a runoff if no one receives more than 50 percent of the vote.

Ivey’s stepped-up ideological intensity goes beyond her ads. This year, she signed one of the most stringent laws in the country restricting transition care for transgender youths, threatening health care providers with time in prison. She also signed legislation limiting classroom discussions on gender and sexual orientation, similar to parts of the Florida law that critics call “Don’t Say Gay.”

Ivey’s campaign says it is all a continuation of her record of conservatism, which has left her on solid footing for re-election. Asked about the change in her messaging from 2018 to 2022, her campaign said in a statement, “What’s changed is that Alabama is now stronger than ever.”

A governor who ‘kicks so much liberal butt’

Ivey’s entry to politics was gradual. Before running for office, she worked as a high school teacher, a bank officer and assistant director of the Alabama Development Office.

Then, in 2003, Ivey became Alabama’s first Republican state treasurer since Reconstruction. In 2011, she won election as lieutenant governor. Six years later, she ascended to governor when the incumbent resigned amid a sex scandal.

When she entered her 2018 race for re-election, Ivey faced several primary challengers. She ran ads that shored up her conservative bona fides while keeping an even tone.

The Alabama N.A.A.C.P. criticized her campaign for an ad expressing support for preserving Confederate monuments. In it, Ivey argued that we “can’t change or erase our history,” but also said that “to get where we’re going means understanding where we’ve been.”

Another primary ad showed two men at a shooting range, preparing to fire at their target. Then someone hits the target first. The camera turns to Ivey — a silver-haired woman in her 70s — with a gun in her hands.

After that primary, her catalog of general election ads included titles like “My Dog Bear,” “Dreams Come True” and “A Former Teacher.”

Now, as Ivey again fights in a primary, her first ads make clear that she’s anti-critical race theory, anti-abortion, anti-Biden and pro-Trump. Her campaign has also revamped the 2018 ad at the shooting range, with one of the men saying that Ivey “kicks so much liberal butt, I bet her leg’s tired.”

A couple of weeks ago, things really took a turn.

The ads keep the same peppy music, and Ivey still smiles as she narrates, but the language crosses into new territory. In the one accusing Biden of “shipping illegal immigrants,” she says, “My message to Biden: No way, Jose.”

Representative Maxine Waters, a Democrat from California, told MSNBC the ad was “plain racist ignorance, in your face.”

In another ad, Ivey falsely declares that the election was stolen from Donald Trump — a departure from previous ads, in which she said simply that she had worked to ensure Alabama’s elections were secure. “The left is probably offended,” she says. “So be it.”

Pressure from the right

But Ivey’s ads aren’t the most provocative of the Republican primary for governor. That distinction would probably go to Tim James, a businessman and son of a former governor, who said in an ad that “left-wing bigots” were teaching children things like that there are “50 genders.”

Another candidate, Lynda Blanchard, a businesswoman and former diplomat, aired an ad criticizing Ivey for suggesting that unvaccinated people carried some blame for a prolonged pandemic.

Ivey opened herself up to a primary challenge in part by extending a mask mandate in the spring of 2021, when many fellow G.O.P. governors were lifting them.

After Biden was inaugurated, Ivey tweeted her congratulations to him and Kamala Harris. And she was one of just a few Republican governors who joined a November 2020 call about the pandemic with Biden when he was president-elect.

Ivey’s campaign denies reports of a rift between her and Trump, who has not endorsed a candidate in the race. Asked about their relationship, an Ivey spokesman said: “Governor Ivey has a great relationship with President Trump and would welcome his support and endorsement. We’re going to win on May 24.” A spokesman for Trump did not respond to a request for comment.

‘You can’t govern contrary to the will of the people’

While the governor is reacting in part to her primary challengers, he said, she is also responding to the Alabama Legislature, which Ball said was the true initiator of the recent legislation on health care for transgender youths.

“She really had to sign it with the election coming up, because they would’ve killed her if she didn’t,” said Ball, who sat out the vote.

Ball said that if Ivey won again, he believed she would govern with a more moderate agenda than her campaign messaging suggests, perhaps addressing prison reform and transparency in government.

“I think she’s been around enough not to drink anybody’s Kool-Aid for long,” he said. “But she’s also been around enough to know what she’s got to do — that you have to build coalitions of support and you can’t govern contrary to the will of the people.”

In Michigan, a secretary of state candidate says yoga is a ‘satanic ritual’

It turns out that Kristina Karamo has opinions about a lot more than how to administer elections.

Karamo, who was endorsed on Saturday by the Republican Party of Michigan in her bid for secretary of state, espouses many of the usual conspiracy theories about the 2020 presidential election. Given that she’s vying to oversee elections in the future, her views on the subject are receiving close scrutiny.

But Karamo is also a prolific podcaster, the host of a now-defunct show on Christian “theology, culture and politics” called Solid Food. The shows tend to be delivered in a monologue, and those monologues have an unstructured, stream-of-consciousness quality to them.

The commentary illustrates why some Michigan Republicans have warned that putting forward candidates like Karamo in a general election could be dangerous for the party, allowing Democrats to paint the G.O.P. as promoting fringe views. Karamo did not respond to a request for comment.

Sex is a consistent topic of discussion on her podcast: Kicking off one show on Sept. 17, 2020, Karamo declares, “Satan orchestrated the sexual revolution to pull people away from God and to tie people into sexual brokenness.”

She goes on to claim that Alfred Kinsey, the American biologist known for his pioneering research into human sexuality, “was totally into Satanism” — quickly amending that to say that Kinsey “never necessarily proclaimed allegiance to Lucifer, but he was inspired by Satanists for their revelry.”

On another podcast episode a day later, Karamo describes the rapper Cardi B as a tool of “Lucifer.”

She also describes yoga as a “satanic ritual.”

“This is not just dance to dance,” Karamo says. “It is to summon a demon. Even yoga. The word ‘yoga’ really means ‘yoke to Brahman.’ So people are thinking they’re doing exercises. No, you’re doing actual — a satanic ritual and don’t even know it.”

In another episode, on Nov. 24, 2020, after offering scattered thoughts on political blackmail and Jeffrey Epstein, Karamo embarks on a lengthy tangent about “sexual deviancy.”

“There are people who are willing to be eternally separated from God for an orgasm,” Karamo says. “That is wild to me.”

A professor at Wayne County Community College, Karamo most recently taught a class on career and professional development.