Biden Picks Bridget Brink to Be Ambassador to Ukraine 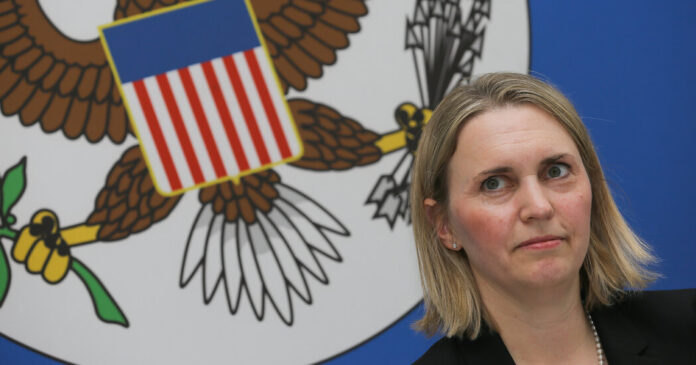 WASHINGTON — President Biden’s pick for ambassador to Ukraine will bolster relations between Washington and Kyiv after years without a Senate-confirmed envoy in the post, veteran diplomats say, but a return to a U.S. diplomatic presence during a war brings new risk for the Biden administration.

After months of delays that confounded veteran diplomats, Mr. Biden on Monday announced his intention to nominate for the post Bridget Brink, the current U.S. ambassador to Slovakia. A native of Michigan, Ms. Brink joined the State Department in 1996 and has served in Serbia, Uzbekistan and Georgia.

If confirmed, Ms. Brink will become a high-level interlocutor between Ukraine’s government and the Biden administration, which have been communicating on an unusually direct basis. Secretary of State Antony J. Blinken speaks several times a week with his Ukrainian counterpart, Dmytro Kuleba, and other top Biden officials are in regular contact with their equivalents. Even though the United States has been represented by a capable acting ambassador in Kristina Kvien, analysts say there is no substitute for a designated official in the country who can coordinate among multiple departments and agencies.

For now, Ms. Brink has no obvious base of operations. The State Department shuttered its Kyiv embassy shortly before Russia’s invasion of Ukraine on Feb. 24 and subsequently ordered all U.S. diplomats out of the country. None are known to have returned.

After a secretive visit to Ukraine over the weekend, however, Mr. Blinken told reporters that the United States would begin to restore a diplomatic presence in the country and that he hoped the embassy could reopen “over a couple of weeks.”

The return of American diplomats to the country, even to western and central cities hours from the current front lines, inevitably comes with a degree of danger. Although Russian forces have consolidated to wage a brutal ground war in Ukraine’s south and east, they are still conducting periodic strikes across the country, including a mid-April missile attack in Lviv that killed eight people.

Starting this week, diplomats who have been working from eastern Poland will make day trips to the relatively peaceful city of Lviv in western Ukraine, U.S. officials added, and return to Poland for the night.

During his visit to Kyiv, Mr. Blinken said he saw people walking the streets, “evidence of the fact that the battle for Kyiv was won and there is what looks from the surface, at least, to be normal life in Kyiv.”

Ms. Brink would be the first Senate-confirmed ambassador to hold the post since mid-2019, when President Donald J. Trump removed Marie L. Yovanovitch, a career diplomat who opposed efforts by his personal lawyer, Rudolph W. Giuliani, to dig up dirt in the country on Mr. Biden’s son, Hunter.

In 2019, at her swearing-in ceremony for the ambassadorship of Slovakia, Ms. Brink talked about the experiences of her grandfather and her husband’s grandparents in Europe during World War II. In February, Ms. Brink visited the border between Ukraine and Slovakia to witness the arrival of Ukrainian refugees. “My heart is with every victim of this senseless war,” she said, according to a State Department news release.

Congressional officials noted that Mr. Biden had not yet formally submitted his nomination, even though the Biden administration notified Ukraine’s government months ago that Ms. Brink was its choice for the job. It is customary to seek prior approval for ambassadorial picks from host governments, and Ukraine was slow to sign off for reasons that are unclear.

In a statement on Monday, Senator Chuck Schumer, the Democratic leader, said the Senate “will prioritize her confirmation once she comes before the Senate and move her as quickly as possible.”

Republicans have blocked or delayed dozens of Mr. Biden’s diplomatic picks, but an aide to a Senate Republican active on foreign affairs issues said on Monday that he did not anticipate much resistance to Ms. Brink’s nomination.

It is unclear how much protection Ms. Brink and other American diplomats in Kyiv will have. American embassies around the world are guarded by U.S. Marine contingents that have numbered in the dozens in war zones such as Iraq and Afghanistan. But U.S. officials have declined to say whether troops will accompany the returning diplomats.

Eric S. Rubin, the president of the American Foreign Service Association, called Ms. Brink “a superbly qualified senior career Foreign Service officer” and said he hoped she could be confirmed quickly. He applauded Mr. Blinken’s plan to reopen the embassy in Kyiv.

Some former diplomats and U.S. officials have been concerned that the Biden administration removed its personnel from Ukraine too quickly earlier this year. U.S. diplomats left the country before some of their foreign counterparts.

In an October speech, Mr. Blinken himself warned that the State Department had grown too risk-averse and said diplomats could not function effectively in dangerous areas if they accepted no risk.

U.S. wants to see Russia weakened. The United States toughened its messaging on the Ukraine war, saying the American aim was not just to thwart the Russian invasion but also to weaken Russia so it could no longer carry out such military aggression anywhere.

Fears of a new front. Explosions shook Transnistria, a breakaway region of Moldova aligned with Russia that occupies a strategically important spot on Ukraine’s western flank. Ukrainian officials accused Russia of causing the explosions as a pretext to invade Ukraine from that direction.

“A world of zero risk is not a world in which American diplomacy can deliver,” Mr. Blinken said. “We have to accept risk and manage it smartly.”

Before the drawdown of staff, about 800 to 900 people worked in the U.S. Embassy in Kyiv. About 300 of those were Americans, and the rest were Ukrainian employees.

William B. Taylor Jr., a retired veteran diplomat who twice served as ambassador to Ukraine, said he had spoken with American diplomats and Ukrainian citizens who had worked in the embassy and learned they were eager to go back.

“For the diplomats, this is what they do,” he said. “For most of the State Department personnel assigned overseas, they understand the risks.”

Mr. Taylor said it was unlikely the embassy would be the target of a Russian attack, and the fact that some U.S. allies had already decided to return gave greater impetus to Washington.

But even if Russia has no intention of harming Americans, war zones are always dangerous. During the 1999 NATO bombing campaign of Serbia, the United States mistakenly struck China’s embassy in Belgrade, killing three Chinese state media employees.

The State Department increased protection measures for diplomats after President Vladimir V. Putin annexed Ukraine’s Crimean Peninsula in 2014 and sent Russian weapons and troops to support a separatist insurgency in eastern Ukraine. Mr. Taylor said that when he first served as ambassador, from 2006 to 2009, he could travel around without diplomatic security. After he returned in 2019, following Mr. Trump’s decision to remove Ms. Yovanovitch from the job, he could not go running in the capital without a security detail.

Like many American embassies, the one in Kyiv is housed in a fortified building outside the city center. Ukrainians help guard the embassy, and a small group of American Marines was also posted there before the war began in February.

U.S. officials have been especially wary of diplomatic risk following the 2012 attack by militants on an American diplomatic compound in Benghazi, Libya, which killed four Americans, including Ambassador J. Christopher Stevens. Republicans, including Mike Pompeo, a congressman who later became C.I.A. director and secretary of state, tormented Secretary of State Hillary Clinton for years with accusations of negligence.

Security will be one of many issues that Ms. Brink is expected to juggle in Kyiv if she is confirmed by the Senate. She will probably often visit the presidential palace in the heart of Kyiv and the headquarters of the Foreign Affairs Ministry. She is expected to help set up secure communications between Ukrainian and American leaders, and she will be tasked with relaying requests for aid from the Ukrainians to Washington.