Utah Democrats Back Independent Evan McMullin as US Senate Candidate 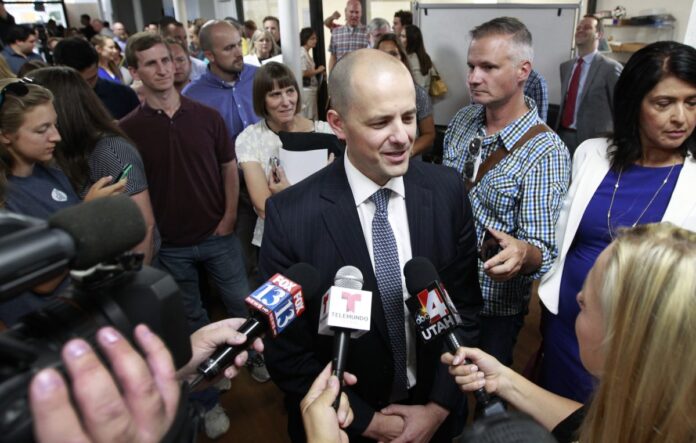 Democrats in the red stronghold of Utah have backed former presidential contender Evan McMullin in a bid to unseat Sen. Mike Lee (R-Utah) later this year.

In Utah, Democrats have long struggled to pull in even 30 percent of the vote, with elections being dominated by Republicans. In 2016, Lee raked in 68.2 percent of the vote to Democrat Misty Snow’s 27.1 percent. During the presidential election the same year, Hillary Clinton won only 27.46 percent support in the state.

Now, Democrats in the state are hoping to use the candidate to challenge Lee in an election cycle that otherwise would have been a smooth ride to victory for the GOP.

On April 23, during a party convention, Utah Democrats took the unusual step of not backing a nominee at all in a 57 percent to 43 percent vote, instead turning their eyes to McMullin in a hope to solidify opposition behind the more popular candidate.

Democrat Kael Weston was shut out, despite running a campaign to win Democrats’ nomination, after some party activists decided McMullin provided a better opportunity.

Speaking at the convention, McMullin said, “We can show the rest of the country—and in fact the world—how to defeat the far-right, how you defend American values, and how you move our country forward.”

“I ask for your support, I want to represent you, I’m committed to that, I will maintain my independence, and we will show the rest of the country how we defeat people like Mike Lee who try to overturn our democracy in the shadows.”

“Today we took an important step in building a new coalition of Democrats, Republicans and independents to change our broken politics,” McMullin said in a tweet after Democrats threw their backing behind him. “I’m grateful for the support of Democratic delegates who voted to join us and for Kael Weston’s honorable campaign. Onward!”

Following the endorsement, former presidential candidate Andrew Yang, who spawned a cult following during the 2020 Democratic primary, applauded the endorsement as a potentially game-changing one.

“Evan McMullin’s candidacy is an historic opportunity on several levels,” Yang wrote in a tweet.

In a tweet, Rep. Dean Phillips (D-Minn.) applauded Democrats in the state for their decision to back McMullin.

“Salutations to Utah Democrats who placed pragmatism ahead of politics and threw their support behind the independent Senate candidacy of @EvanMcMullin,” Phillips wrote. “Evan is a man of principle and integrity at a time we need more of both in the United States Congress.”

In another tweet, Ben McAdams, a former member of Congress, mayor of Salt Lake County, and Utah state senator, also applauded the decision.

“Today Utah Democrats voted to join Evan McMullin’s independent coalition and NOT nominate a candidate for U.S. Senate,” McAdams said. “I’m proud to be part of this coalition. Together we can win this race and defeat Mike Lee.”

Though Republicans are widely expected to flip the House in November, the Senate—which is currently equally divided between 50 Democrats plus the vice president and 50 Republicans—could go either way.

According to the GOP-electioneering and fundraising National Republican Senatorial Committee (NRSC) in a phone call with the Epoch Times, the NRSC currently considers five Senate Democrats vulnerable.

However, some Republican seats also are vulnerable to Democrat takeover, particularly in battleground states like Pennsylvania, where Sen. Pat Toomey (R-Pa.) has announced that he will not seek reelection, and in Wisconsin, where Sen. Ron Johnson (R-Wis.) could face attacks by Democrats for his past statements on the 2020 election and the CCP (Chinese Communist Party) virus.

In this makeup where every single seat counts, McMullin may pose a greater risk to Lee than any Democrat could hope to, and it’s not clear how this unusual decision by Democrats will change the dynamics of the national battle for the Senate.

Lee’s office could not be immediately reached for comment on the issue.