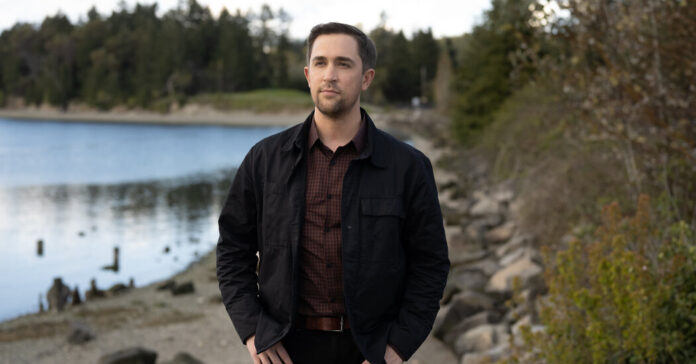 GIG HARBOR, Wash. — Christopher Rufo appears on Fox News so often that he converted a room in his Pacific Northwest house to a television studio, complete with professional lighting, an uplink to Fox in New York and an “On Air” light in the hall so his wife and two children don’t barge in during broadcasts.

“I’ll do ‘Tucker’ and then pop out and have dinner,” Mr. Rufo said recently at his home in Gig Harbor, Wash., thousands of miles from the nation’s media and political capitals.

Mr. Rufo is the conservative activist who probably more than any other person made critical race theory a rallying cry on the right — and who has become, to some on the left, an agitator of intolerance. A senior fellow at the Manhattan Institute, a right-leaning think tank, he has emerged at the front of another explosive cultural clash, one that he sees as even more politically potent and that the left views as just as dangerous: the battle over L.G.B.T.Q. restrictions in schools.

Mr. Rufo has taken aim at opponents of a new Florida law that prohibits teachers in some grades from discussing L.G.B.T.Q. issues and that critics call “Don’t Say Gay.” He declared “moral war” against the statute’s most prominent adversary, the Walt Disney Company. And he has used the same playbook that proved effective in his crusade on racial issues: a leak of insider documents.

On “Tucker Carlson Tonight,” Mr. Rufo shared video last month of an internal Disney meeting where a producer spoke of adding “queerness” to an animated series and mentioned, tongue in cheek, her “not-at-all-secret gay agenda.”

To conservatives, the video was proof that Disney was sexualizing children.

“We’ve caught them on tape and the evidence is damning,” Mr. Rufo declared. The story ricocheted through the conservative media ecosystem. Fox News alone ran dozens of segments critical of Disney.

On Friday, Mr. Rufo appeared with Gov. Ron DeSantis of Florida at the signing of a bill known as the Stop W.O.K.E. Act, which bars teaching in workplaces and schools that anyone is inherently biased or privileged because of race or sex. Mr. Rufo, who consulted on the bill, warned Disney that an in-house program it had run that urged discussion of systemic racism was “now illegal in the state of Florida.”

The signing was the culmination of Mr. Rufo’s long campaign to short-circuit corporate and school efforts at diversity and inclusion training. He has acknowledged twisting hot-button racial issues to achieve his aims. “The goal is to have the public read something crazy in the newspaper and immediately think ‘critical race theory,’” he wrote on Twitter last year.

Friday was also a milestone in Mr. Rufo’s latest fixation. As he looked on, Mr. DeSantis signed a second measure abolishing Disney’s special tax status in the state.

The retaliation against Disney emerged after its opposition to the Parental Rights in Education law, signed by Mr. DeSantis last month, which bans classroom discussion of sexual orientation and gender identity for children below fourth grade, and limits it in older grades. The anti-L.G.B.T.Q. statute is part of a political brawl unfolding in an election year as both parties try to excite their bases. Republican lawmakers in multiple states have proposed measures similar to Florida’s.

Mr. Rufo is convinced that a fight over L.G.B.T.Q. curriculums — which he calls “gender ideology” — has even more potential to spur a political backlash than the debate over how race and American history are taught.

Critics of Mr. Rufo, and of the broader right-wing push on L.G.B.T.Q. issues, say the attacks represent a new era of moral panic, one with echoes of slanders from decades ago that gay teachers were a threat to children. Some champions of Florida’s law, including Christina Pushaw, Mr. DeSantis’s press secretary, have labeled their opponents “groomers” — adults who want to sexually pursue children.

Donald Moynihan, a professor of public policy at Georgetown University, said conservatives had falsely and intentionally linked child sex predators with opponents of the Florida law. Mr. Rufo, he said, had provided fuel for their arguments.

“This is the stock-in-trade of Rufo’s brand of activism — creating these very negative brands and then associating things that might have much more popular support with those brands to put people on the defensive,” Dr. Moynihan said. “That’s the through line you see between the C.R.T. stuff and the current ‘groomer’ effort.”

After Mr. Rufo released the Disney employee videos, he shared mug shots on Twitter of Disney workers who had been charged in child sexual abuse cases over the years, based in part on CNN reporting from 2014.

He failed to note, in an article he wrote about the arrests for City Journal, a publication of the Manhattan Institute, that none of the cases in the CNN report involved children at Disney’s parks. Nor did he include Disney’s response to CNN that the arrests were “one one-hundredth of 1 percent of the 300,000 people we have employed during this time period.”

In another article for City Journal, Mr. Rufo claimed that American schools were “hunting grounds” for teachers, and that “parents have good reason” to worry about “‘grooming’ in public schools.”

He cited data from a decades-old survey, in a study for the Education Department, but he omitted the study’s declaration that “the vast majority of schools in America are safe places.”

Charlie Sykes, a founder of The Bulwark, a political site for anti-Trump conservatives, said Mr. Rufo’s association with the Manhattan Institute provided “intellectual cover” for flawed and inflammatory work.

“It gives him this veneer of being a conservative scholar,” Mr. Sykes said. “He basically says, ‘Anything you don’t like about race becomes C.R.T.’ Now, all of your anxieties about sexuality or gender become grooming.”

Reihan Salam, the president of the Manhattan Institute, defended Mr. Rufo’s work for giving voice to parents’ concerns about the “ideological climate in public schools,” specifically a “lack of transparency over the teaching of contentious subjects.”

Mr. Rufo denied that he had broadly equated opponents of the Florida law with groomers. “It’s wrong, factually and morally, to accuse someone of being a groomer with no basis and evidence,” he said.

“It’s become a powerful word that should be used with great responsibility,” he added. Nevertheless, some L.G.B.T.Q. people have reported an increase in harassment as the use of the term has surged online, echoing the QAnon conspiracy theory’s fixation on a cabal of “deep state” Democratic pedophiles.

Mr. Rufo, 37, lives and works in Gig Harbor, a picturesque boating town on Puget Sound south of Seattle. A former documentary filmmaker and, briefly, an unsuccessful candidate for Seattle’s City Council, he burst on the scene in 2020 by publicizing examples of diversity trainings in government that seemed to have gone off the rails, such as asking bureaucrats to examine their “complicity in the system of white supremacy.” Diversity trainings, long a fixture in government and corporate America, typically support the idea that people’s unconscious biases involving race and gender can create hostile work environments.

His reporting in City Journal and posts on social media electrified readers, who leaked him more documents from anti-bias and diversity seminars.

C.R.T. is not new. Derrick Bell, a pioneering legal scholar who died in 2011, spent decades exploring what it would mean to understand racism as a permanent feature of American life. He is often called the godfather of critical race theory, but the term was coined by Kimberlé Crenshaw in the 1980s.

The theory has gained new prominence. After the protests born from the police killing of George Floyd, critical race theory resurfaced as part of a backlash among conservatives — including former President Trump — who began to use the term as a political weapon.

The current debate. Critics of C.R.T. argue that it accuses all white Americans of being racist and is being used to divide the country. But critical race theorists say they are mainly concerned with understanding the racial disparities that have persisted in institutions and systems.

A hot-button issue in schools. The debate has turned school boards into battlegrounds as some Republicans say the theory is invading classrooms. Education leaders, including the National School Boards Association, say that C.R.T. is not being taught in K-12 schools.

Perusing footnotes, he discovered the field of critical race theory. Originally a graduate-level academic thesis before conservatives turned it into political shorthand for a variety of teachings on race, it holds that racism is systemic in American institutions, not just a matter of individual bigotry.

The next day, he said, he received a call from Mark Meadows, the White House chief of staff, telling him that Mr. Trump had seen him on Fox, and asking him to consult on an executive order. Framed in his home, Mr. Rufo has the pen that Mr. Trump used to sign the order, and a handwritten card from the White House: “Who says one person can’t make a difference?!”

The evidence was often thin, typically focusing on diversity training for teachers. But even as critics on the left called the attacks a diversion meant to exploit white grievances, the messaging resonated with many parents, who were already angry at school administrators about pandemic-imposed closures.

His advocacy has been financially rewarding. Besides his Manhattan Institute position, he has a newsletter with 2,500 paid subscribers, and he runs a nonprofit entity to support his work, which he said had received over $500,000 in donations since late last year.

Mr. Rufo said he thought a great deal about selecting the right language to define what he opposed. A fan of postmodernist thinkers, he refers to the importance of “meta-narratives.” He said that to maximize voters’ anxieties about gender issues, he plans to write a series of articles on classroom practices he deems outrageous.

“You have to provide the vocabulary for people to talk about” gender issues, he said. “Once that happens, it’s going to be explosive.”

State Senator Shevrin D. Jones of Florida, a Democrat who opposed the state’s classroom law, called Republicans “the party of buzzwords — they use words like ‘groomers’ to rally up their base.”

Three months later, as Mr. Rufo works on several projects including a book, his classroom series is still in its early stages. On Thursday, he published his first article.