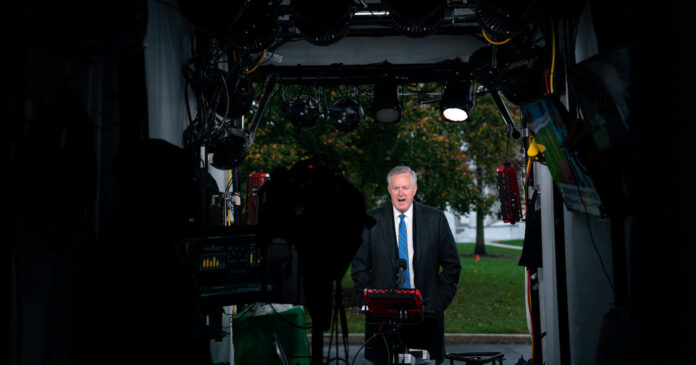 Ms. Hutchinson told investigators that she heard lawyers from the White House Counsel’s Office say the plan for alternate electors was not “legally sound,” according to the filing.

“The select committee’s filing today urges the court to reject Mark Meadows’s baseless claims and put an end to his obstruction of our investigation,” the leaders of the committee, Representatives Bennie Thompson, Democrat of Mississippi, and Liz Cheney, Republican of Wyoming, said in a statement. “Mr. Meadows is hiding behind broad claims of executive privilege even though much of the information we’re seeking couldn’t possibly be covered by privilege and courts have rejected similar claims because the committee’s interest in getting to the truth is so compelling.”

A lawyer for Mr. Meadows did not immediately respond to a request for comment.

The committee issued a subpoena in November to Ms. Hutchinson, who served as special assistant to the president for legislative affairs and was at the White House on Jan. 6 and with Mr. Trump when he spoke at the “Stop the Steal” rally that day. She also reached out directly to Georgia officials about Mr. Meadows’s trip to that state.

She was present for key meetings and discussions in the White House in the buildup to Jan. 6.

Ms. Hutchinson also told the panel that top White House lawyers had threatened to resign over extreme plans to seize voting machines, and that had helped persuade Mr. Meadows to back off that plan. “Once it became clear that there would be mass resignations, including lawyers in the White House Counsel’s Office, including some of the staff that Mr. Meadows worked closely with, you know, I know that did factor into his thinking,” she said.

And she said members of Congress had urged a crowd to amass at the Capitol on Jan. 6.

One investigator asked her whether Representative Scott Perry, Republican of Pennsylvania, who is now the head of the right-wing House Freedom Caucus, supported “the idea of sending people to the Capitol on January the 6th.”

“He did,” Ms. Hutchinson replied.

The panel also emphasized how personally involved Mr. Meadows was in attempts to pressure Brad Raffensperger, the Georgia secretary of state, over Mr. Trump’s loss there — so much so that Mr. Raffensperger ducked and ignored his phone calls, viewing them as improper.

Signs of progress. The federal investigation into the Jan. 6 attack appears to be gaining momentum. The Justice Department has brought in a well-regarded new prosecutor to help run the inquiry, while a high-profile witness — the far-right broadcaster Alex Jones — is seeking an immunity deal to provide information.

Debating a criminal referral. The House panel has grown divided over whether to make a criminal referral of former President Donald J. Trump to the Justice Department, even though it has concluded that it has enough evidence to do so. The debate centers on whether a referral would backfire by politically tainting the expanding federal investigation.

Continuing election doubts. More than a year after they tried and failed to use Congress’s final count of electoral votes on Jan. 6 to overturn the election, some Trump allies are pushing bogus legal theories about “decertifying” the 2020 vote and continuing to fuel a false narrative that has resonated with Mr. Trump’s supporters.

“‘Yeah, Mark Meadows called. The president wants to talk to you,’” Mr. Raffensperger recalled an aide telling him. “I don’t want to do that. And just tell him, you know, we’re just not interested in doing that.”