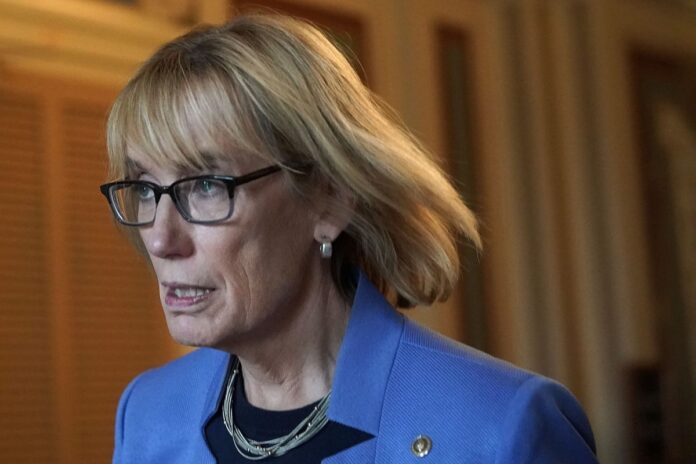 Democrats facing tough reelection battles have begun to openly break with President Joe Biden in recent weeks over his plan to reverse Title 42 restrictions on entry into the United States through the southern border, highlighting fears among vulnerable Democrats that the issue could turn the tide in November.

Since taking office, Biden has sought to overturn Trump-era immigration rules, placing a moratorium on the construction of the wall along the southern border and ending the highly successful “Remain in Mexico” policy, which required illegal immigrants to stay in the care of America’s southern neighbor until their asylum applications are approved.

Especially controversial is Biden’s plan to overturn President Donald Trump’s implementation of the Title 42 immigration rule—which ensures that many illegal immigrants apprehended along the southern border are turned back—near the end of May.

As immigration rates continue to climb, and as many Democrats face tough reelection bids in battleground states, some Democrats have begun to join Republicans in calling for Biden to reverse his decision and to focus on reinforcing defenses along the southern border.

Despite having opposed efforts by Republicans to strengthen the border during the past six years, voting against every Republican border security proposal that made it to the Senate floor, Sen. Maggie Hassan (D-N.H.) has apparently changed her mind on the issue in recent weeks, and has on several occasions called for tougher border security and more funding.

One GOP strategist told The Epoch Times that the change in position was so pronounced that Hassan has been trying to rebrand herself as “MAGA Maggie” moving into this year’s midterms.

Republicans have had their eyes on Hassan’s seat since 2016, when Hassan just barely squeaked out a victory over Republican Kelly Ayotte by a 0.16 percent margin, boiling down to around 1,100 votes. In 2022, many Republicans have suggested the GOP is in a far better position to take back the state.

David Carney, who serves as the general consultant for GOP frontrunner Chuck Morse in the New Hampshire Senate race, agreed in a phone interview that the race is a prime opportunity for the GOP to make advances in the Senate this year.

“It’s one of the top prospects for our side to pick up a seat, no question,” Carney said.

“President Biden’s job approval is underwater by a net 9 points and 51% of voters disapprove of the job that he is doing,” Morse’s campaign noted in a press release, citing a poll conducted by the Phillips Academy.

Later, Carney turned to Hassan’s track record on border security, which he said had hurt New Hampshire residents by allowing for an influx of highly-dangerous fentanyl into the state.

“Maggie Hassan has voted against every border security bill since she’s been in office,” Carney said. “And yet, she was on the border this week with a video about how we need to have a strong border and put the wall up.

The video in question was posted by Hassan to Facebook and other social media platforms on April 11 after she visited the border.

“I just spent two days at our southern border, and it’s clear we need to make more investments in personnel, technology, and physical infrastructure to secure our border,” Hassan said in the video’s caption.

“I mean, [Hassan] is flipping so much that she’s giving people a headache trying to track where she is on policies,” Carney said. “She is worse than a windmill. She’s just going with the wind.”

Her April 11 post wasn’t the only comment that saw Hassan pushing for a stricter approach to immigration.

While visiting Arizona Hassan told a local New Hampshire station that had accompanied her: “Our front-line personnel need significant additional numbers, people on the ground at the border. They need more technology. They need access roads and, in some places, they need physical barriers.

“The administration really needs to step up here, develop a plan and get more resources to the southern border,” Hassan added.

Hassan’s comments indicate a substantial shift in her attitudes toward the situation as it has garnered more and more attention from Republicans and independents alike, who could make or break her bid for reelection later this year.

In a statement to the Epoch Times, T.W. Arrighi, national press secretary for the National Republican Senatorial Committee (NRSC) argued that rather than helping Hassan, this attitude shift would only worsen her prospects.

“MAGA Maggie is burning her base and earning zero new votes in the process,” Arrighi said of Hassan’s apparent shift.

Hassan could not be reached for further comment on the issue by press time.

Lifting Title 42 ‘Is Going to Be a Crisis’: Sen. Mark Kelly

Hassan is not the only Democrat who has seemed to buck the official White House position on immigration.

As early as April 2021, well before levels of illegal immigration had reached their peak, Kelly called the developing situation along the southern border a “crisis,” rejecting the White House’s more optimistic portrayal of the issue. Around the same time, Kelly vowed that he would “continue holding this administration accountable” on border security.

Now, Kelly is re-upping his challenge to the Biden administration’s immigration policies.

Following a recent visit to the border, Kelly warned reporters that if Biden lifted Title 42, “It’s going to be a crisis.”

In the Senate, Kelly has joined Sens. Hassan, Kyrsten Sinema (D-Ariz.), and Jon Tester (D-Mont.) in putting forward legislation that would delay the end of Title 42 for at least 60 days.

Still, Kelly has not taken quite as hardline stance against immigration as Hassan.

Rather, he has called for the White House to ease strains on the immigration system by putting forward a plan to increase the number of judges available to hear asylum claims and to bus and house immigrants entering the country, though it is not clear whether this would apply only to those legally allowed to be in the country.

In addition, near the beginning of the 117th Congress, Kelly joined his colleagues in helping to introduce the For the People Act, a voting bill that the nonpartisan Federation for American Immigration Reform (FAIR) told The Epoch Times would “shield and excuse fraudulent voting by illegal aliens” through its relaxed security measures.

Kelly has seemed to veer toward the middle on immigration policy, hoping to satisfy both his Democrat primary constituents and the general Arizona population, but as an influx of illegal aliens continues to pour into Arizona, it’s unclear how voters will take Kelly’s immigration stance.

Arrighi warned against giving too much weight to Kelly’s pretensions of being strong on border security.

“Mark Kelly has voted against border wall funding, and voted to support sanctuary cities and even to cut checks to those in the country illegally,” Arrighi said. “His ‘concern’ over the current crisis that he helped exacerbate is worthless.”

“More frustrating is the constant delay from Mark Kelly. He has made it his political calling card to not give a position on something until everybody’s already taken a position on it,” Arrighi added. “Kelly uses a lot of words, but takes very little action when it comes to border security.”

Kelly did not respond to a request for comment by press time.

Sen. Catherine Cortez Masto (D-Nev.), who is also considered a target by the NRSC, has suggested that she agrees with Kelly’s concerns about lifting Title 42.

“I think it’s just wrong to do it without a detailed plan. We always know right around summer there’s a surge,” Cortez Masto said.

On April 19, Reps. Elissa Slotkin (D-Mich.) and Abigail Spanberger (D-Va.) joined their Senate colleagues in decrying the plan to reverse Title 42 in a letter to Department of Homeland Security Secretary Alejandro Mayorkas.

“Given our backgrounds in national security, we know the Executive Branch is accustomed to planning for contingencies, and it is for this reason that we submit to you the below requests for actions to be taken before the administration lifts the Title 42 order, so that we prevent a humanitarian and security crisis,” the duo wrote.

“We are concerned about how DHS will contend with an increase of people … that will more than triple the department’s capacity without ample and robust planning,” the letter continued. “And while the administration gave itself two months to prepare, what has been shared with us to date seems like too little, too late—especially when the removal of Title 42 will occur at the same time that a spike in seasonal migration occurs.”

Still, the White House has given no indication that it will accede to bipartisan pressure to reverse the Title 42 decision.

And some have suggested that Democrats’ expressed concerns over illegal immigration are little more than political theater in preparation for the upcoming midterm battles, which are expected to see heavy Democratic losses in the House and will put Democrats in the Senate on the defensive.

In a statement to The Epoch Times, FAIR government relations manager Preston Huennekens suggested as much, noting Democrats’ poor track record on border security until recently.

“These Democratic officials only care about the lifting of Title 42 because they understand it will be a political disaster for Democrats,” Huennekens said.