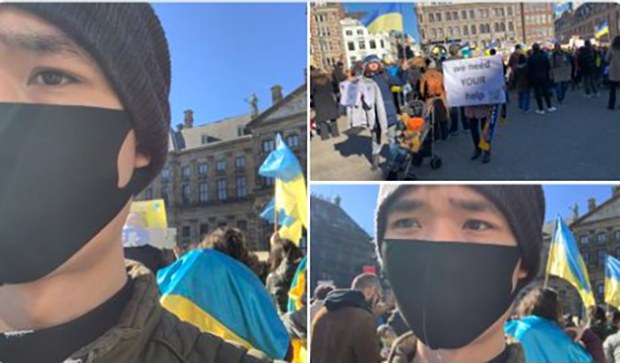 A Chinese national living in the Netherlands and his family in China have been harassed by Chinese police over posts to social media he made while out of the country, including voicing support for Ukraine following the Russian invasion, RFA has learned.

Gao Ronghui, who hails from Pingtan county in the southeastern Chinese province of Fujian, provided audio recordings of phone calls with police from Suao police station in Pingtan county, who have also visited his parents and elderly grandmother, he said.

“As Chinese citizens, we don’t take part in demonstrations,” the police officer tells him, repeating: “You can’t take part.”

In another section of the audio file provided to RFA, the police officer asks him if he wrote “reactionary comments” on Twitter.

“Let me tell you this: the internet is wide open. Just because you’re in a foreign country, doesn’t mean that China doesn’t know what you’re doing,” the officer warns him. “We know everything, do you understand?”

The officer then orders Gao to “delete everything you wrote online, and on Twitter.”

“This has to be deleted immediately and we can pretend we never saw it and all will be forgiven,” the officer says, before threatening his family. “If there is a problem with your political stance, it will affect your family for generations, if you have kids, where they go to school, anything you want to do. Politics is a massive thing.”

“My grandmother had high blood pressure because of this, and my mother was depressed for two or three weeks, and spent about three days in hospital on a drip,” he said.

“I feel very confused and helpless right now,” Gao told RFA. “I feel that the CCP is depriving me of my freedom even here in the Netherlands.”

“I want to tell them that the only person responsible for their actions is the person doing them … [but] they have silenced me. They, the system, they’re the ones who should change, not me. It’s the 21st century,” he said.

Gao said he fled China after police raided his family home in July 2021 over social media posts he had made, then summoned him for questioning.

“I walked to the police station from a friend’s house that day. It took 20 minutes, and during that time I deleted everything on my phone,” he said. “I knew I couldn’t have committed any crime other than just spreading the truth.”

“When I got to the police station, I was severely beaten and abused, and they forced me to sign a guarantee that I would support the [ruling Chinese Communist] Party (CCP) line, and not post anything that would endanger national security,” Gao said. “From that day on, I started planning to leave the country.”

Gao said he finally felt free after arriving in the Netherlands, and began expressing his political views freely in public, supporting practitioners of the Falun Gong spiritual movement, which has been heavily suppressed by the CCP inside China, and showing solidarity with Ukraine.

“[I even] sprayed the Chinese embassy with paint to vent my anger,” Gao said. “I knew this was wrong, and I went to the police station and turned myself in, but the Dutch police told me it was okay.”

“Around that time, I started to criticize the CCP again on Twitter, in solidarity with the suffering Chinese people. I know that if I don’t speak up for them today, no one will speak for me tomorrow,” he said.

But Gao wasn’t as free as he had hoped he would be, and the long arm of Chinese law enforcement has succeeded in controlling his actions by threatening his family.

He said he hoped public anger over the recent lockdowns in Shanghai and other parts of China under the CCP’s draconian zero-COVID policy would fuel political opposition back home.

“I think some Chinese people are going to wake up because of the Shanghai lockdown, as they feel the iron fist themselves,” Gao said. “We should stand united to change China.”