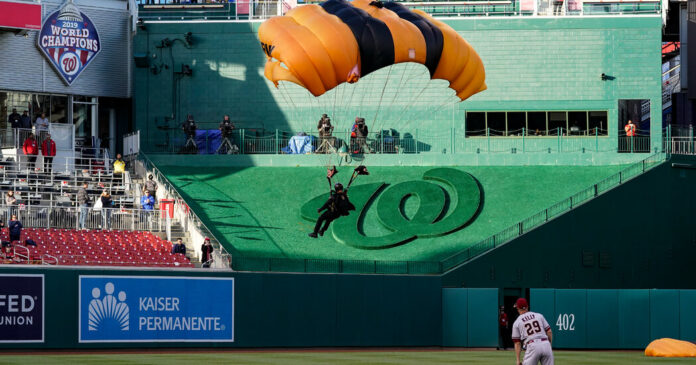 WASHINGTON — A plane carrying members of the Army’s Golden Knights parachute team was taking part in a celebration of the armed forces at Nationals Park on Wednesday evening.

But it also sparked alarm and a rushed evacuation of the Capitol — and then an angry condemnation from Speaker Nancy Pelosi, who accused federal aviation officials of failing to inform the complex’s security officials of a plane circling worryingly close.

“The Federal Aviation Administration’s apparent failure to notify Capitol Police of the preplanned flyover” of Nationals Stadium “is outrageous and inexcusable,” Ms. Pelosi said in a statement. “The unnecessary panic caused by this apparent negligence was particularly harmful for members, staff and institutional workers still grappling with the trauma of the attack on their workplace on Jan. 6.”

Shortly after 6:30 p.m., alarm surged through Capitol Hill as lawmakers and staff received an urgent message from the U.S. Capitol Police: “Evacuate now: Aircraft intrusion.” The alert said officers were tracking an “aircraft that poses a probable threat to the Capitol complex.”

Aides panicked, furiously texting to find out what was happening.

But less than 20 minutes later, lawmakers received a follow-up alert: “The aircraft no longer poses a threat to the Capitol complex and the U.S.C.P. is now preparing buildings for re-entry.”

The panicked evacuation showed the extent to which the Capitol remains on edge after an attack by a pro-Trump mob on Jan. 6, 2021, left more than 150 police officers injured and several people dead — and how communication breakdowns between the Capitol Police and other federal agencies, which contributed to the chaos on Jan. 6, still dog the department. While most lawmakers were out of Washington in the middle of a two-week recess, some staff members were working in the building.

The Capitol Police ordered nearly a dozen buildings cleared, including the visitor center, office buildings and the Library of Congress.

Ms. Pelosi praised the police force for ordering the evacuation and “vigilantly monitoring for a potential aircraft threat.”

“Our officers ensured the safety of all who work in these hallowed halls — and we thank them for their exemplary service,” she said.

She vowed to conduct a “thorough after-action review that determines what precisely went wrong today and who at the Federal Aviation Administration will be held accountable for this outrageous and frightening mistake.”

The Federal Aviation Administration said in a statement that it would review the events, adding that “we know our actions affect others, especially in our nation’s capital region, and we must communicate early and often with our law enforcement partners.”

Notification of the false alarm was met with relief on Capitol Hill, but also anger and frustration.

“Would love to have whoever is responsible for this to explain why the miscommunication occurred directly to my mother, who texted to ask if I was safe,” Aaron Fritschner, the deputy chief of staff to Representative Donald S. Beyer Jr., Democrat of Virginia, wrote on Twitter.

Signs of progress. The federal investigation into the Jan. 6 attack appears to be gaining momentum. The Justice Department has brought in a well-regarded new prosecutor to help run the inquiry, while a high-profile witness — the far-right broadcaster Alex Jones — is seeking an immunity deal to provide information.

Debating a criminal referral. The House panel has grown divided over whether to make a criminal referral of former President Donald J. Trump to the Justice Department, even though it has concluded that it has enough evidence to do so. The debate centers on whether a referral would backfire by politically tainting the expanding federal investigation.

Continuing election doubts. More than a year after they tried and failed to use Congress’s final count of electoral votes on Jan. 6 to overturn the election, some Trump allies are pushing bogus legal theories about “decertifying” the 2020 vote and continuing to fuel a false narrative that has resonated with Mr. Trump’s supporters.

The Capitol Police are traditionally informed of any event in the area involving aircraft, given tight regulations on Washington airspace. Similar incidents have happened in the past, including in 2004, when a plane carrying Gov. Ernie Fletcher of Kentucky to former President Ronald Reagan’s funeral was mistaken for a threat and prompted a hasty evacuation of the complex.

As Capitol officials were expressing their anger and frustration on Wednesday, the pregame festivities were getting underway for military appreciation night at the Washington Nationals’ game against the Arizona Diamondbacks.

The Golden Knights landed one by one in the outfield with their bright golden parachutes flowing in the wind.

“Let’s make some noise!” an announcer said, to welcome the six parachutists. “May all your days be prosperous and your nights golden!”

He did not mention the panicked evacuation a mile away.