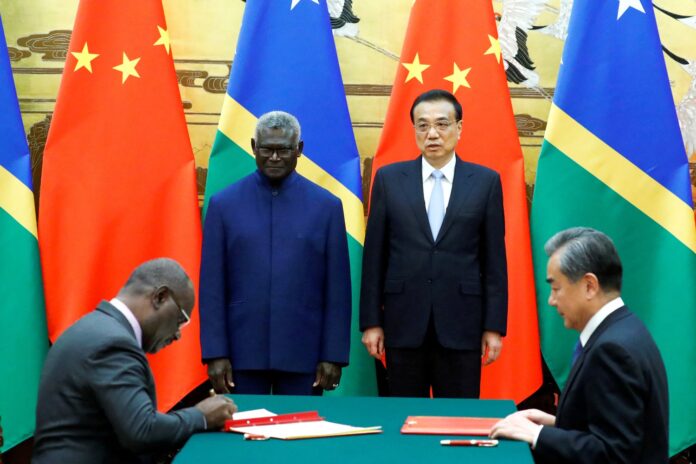 China and the Solomon Islands have both confirmed they signed a controversial security pact that has sparked concerns about China’s rising influence in the Pacific region.

The confirmation came as a U.S. delegation led by the National Security Council Indo-Pacific coordinator Kurt Campbell was heading to Honiara to discuss regional security issues.

Solomon Islands Prime Minister Manasseh Sogavare told parliament on Wednesday that the agreement with China was to help with the country’s “internal security situation,” referring to recent unrest that saw businesses and buildings burned and looted.

The prime minister said the decision “will not adversely impact or undermine the peace and harmony of our region.”

Hours before that, a Chinese government spokesman said that the pact is “part of normal exchanges and cooperation between two sovereign and independent countries” and does not target any third party.

China did not offer an explanation about whether the signed document is the final agreement.

Neither party has revealed any details of the deal, with Sogavare saying it would be disclosed after a “process.”

Solomon Islands’ neighbors Australia and New Zealand have repeatedly voiced concerns since a copy of the draft agreement was leaked online in March.

“We are concerned about the lack of transparency with which this agreement has been developed, noting its potential to undermine stability in our region,” the statement reads.

Seselja traveled to Honiara last week to urge the Solomon Islands prime Mminister not to sign the deal with Beijing, without success.

New Zealand’s Foreign Minister Nanaia Mahuta said her country was “saddened” that the Solomon Islands had made the pact.

The U.S. also expressed concern over “the lack of transparency” in China’s security pact with the Solomon Islands, calling it part of a pattern of Beijing offering “shadowy” deals to countries, Reuters news agency reported.

Two top U.S. officials for the Indo-Pacific region – Kurt Campbell and Daniel Kritenbrink, the assistant secretary of state for East Asian and Pacific affairs – are currently in Fiji before traveling to Honiara to meet with the island nation’s leaders.

Campbell said in January that the U.S. has “enormous moral, strategic, historical interests” in the Pacific but had not done enough to assist the region.

Their trip has been criticized by China as having “ulterior motives.”

“Several senior U.S. officials now fancy a visit to some Pacific island countries all of a sudden after all these years,” said Chinese Foreign Ministry’s Wang Wenbin, pointing out that the U.S. Embassy in Solomon Islands has been closed for 29 years.

This February, U.S. Secretary of State Antony Blinken traveled to Fiji to meet with Pacific island leaders, and announced that the embassy in Honiara would be reopened.

“China is always a builder of peace and a promoter of stability in the South Pacific region,” Wang said.

A draft copy of the security pact leaked onto social media in late March suggested there would be Chinese logistical hubs or bases in the island nation.

One of the clauses says: “China may, according to its own needs and with the consent of Solomon Islands, make ship visits to, carry out logistical replenishment in, and have stopover and transition in Solomon Islands.”

David Capie, director of the Centre for Strategic Studies at the Victoria University of Wellington in New Zealand, told RFA that the security pact would allow Beijing to set up military bases and deploy troops in the Pacific island nation, “marking the start of a much sharper military competition than anything we’ve seen in the region for decades.”

Capie said that the agreement “would allow the People’s Republic of China to deploy police and military personnel to Solomon Islands with the consent of the host government, and potentially provide for refueling and support of Chinese ships.”

U.S. State Department Spokesperson Ned Price said earlier this week that the U.S. is concerned that the agreement “leaves the door open for the deployment of Chinese forces on the Solomon Islands.”

“We believe that signing such an agreement could increase destabilization within the Solomon Islands and will set a concerning precedent for the wider Pacific island region,” Price added.

Analysts say a presence of Chinese troops in the Solomon Islands could raise the risk of confrontation between China and the U.S. and its allies, as well as challenge the U.S.-led vision of a “Free and Open Indo-Pacific.”