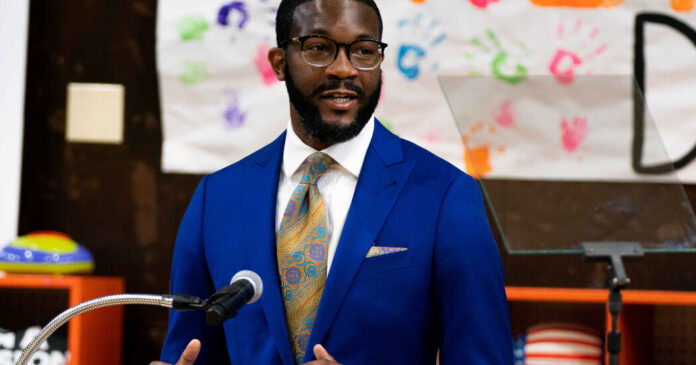 Wearing a bright yellow shirt emblazoned with the words “Legalize Alabama,” the mayor of Birmingham, Ala., said in a video posted on Twitter on Wednesday that he had pardoned anyone in the city who had been convicted of misdemeanor marijuana possession charges in the last eight months of 2021.

The announcement from Mayor Randall Woodfin — which fell on April 20, or 4/20, the unofficial holiday for marijuana celebrations — came a year after he pardoned about 15,000 people in the city who had criminal convictions for possession of the drug from 1990 through 2020.

Mr. Woodfin, who urged other mayors and governors to make similar pardons, said that the effect of marijuana criminalization is still being felt by people — mostly Black and Hispanic — whose prospects are diminished by low-level convictions related to the drug.

“We’re way past the tipping point on this issue,” he said by phone on Wednesday.

For years, Republican state legislators and Gov. Kay Ivey have opposed full legalization of marijuana, putting them at odds with Birmingham, the state’s largest Democratic city. In Alabama, mayors have executive powers to grant such pardons, and Mr. Woodfin said he would continue to issue them on a yearly basis until the law changes.

“This is not one of the ones I’m thumbing my nose at the state,” he said, adding that he wanted to work with legislators to encourage them to legalize the drug.

He added that “it’s the right side of history,” as 18 other states and Washington, D.C., have fully legalized cannabis.

“This has an impact on not only young people, but anybody who needs and deserves a second chance,” Mr. Woodfin says in the video as the song “The Next Episode” by Dr. Dre and Snoop Dogg plays in the background, its funky groove synonymous with laid-back smoking.

In New Jersey, the first sales of recreational, adult-use cannabis will start on Thursday, the culmination of a yearslong effort to legalize marijuana and to curtail racially unbalanced prosecutions for possessing the drug.

States where recreational marijuana use is illegal include South Carolina, Kansas, Wyoming and Idaho, according to the Defense Information Systems Agency.

Officials have made pardons for marijuana convictions before. In 2017, Peter Shumlin, then the governor of Vermont, pardoned 192 people who had been found guilty of possession. And in 2019, a New York State law that further decriminalized possession automatically expunged many low-level marijuana convictions.

Republicans in Alabama have largely opposed legalization. The Alabama Democratic Party announced its support of the move just last year, according to AL.com.

Governor Ivey signed a law last year that legalized marijuana for the treatment of some medical conditions and symptoms, but she has not signaled support for recreational use.

The governor’s office did not immediately respond to an email seeking comment on Wednesday night.

A spokesman for Mr. Woodfin said that as of Wednesday evening, it was still unclear how many people would be affected by the mayor’s blanket pardon.

Mr. Woodfin said that he “needed to have conversations with my police department about their discretion” in making arrests related to marijuana use.

The Birmingham Police Department continues to arrest people on marijuana-related charges, but Mr. Woodfin said that it is “not something the police want to actively do.” They are enforcing a statewide law, he said.

The song choice for the next video, however, may change. He said by phone on Wednesday that he had considered “Mary Jane” by Scarface, in which the artist raps, “Need some company to keep you sane? Call her name: Maryjane.”