3 in 10 Ukrainians Granted Visas Have Arrived in UK: Government Figures 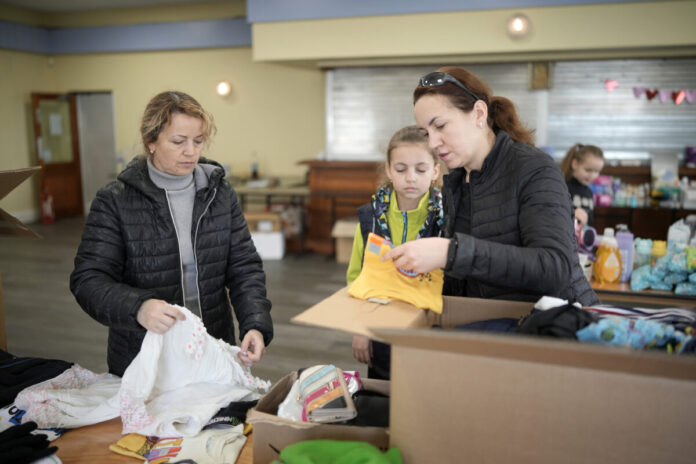 Fewer than a third of Ukrainian refugees who have been issued with visas have arrived in the UK, Government figures show.

A total of 71,800 visas had been issued as of Wednesday under the Ukraine Family Scheme and the Homes for Ukraine Sponsorship Scheme, the Government said.

But, as of Monday, just 21,600 Ukrainians had arrived in the UK, according to figures from the Department for Levelling Up, Housing and Communities and the Home Office.

Government officials believe some people applied for visas so they have the option of coming to the UK but are staying in countries bordering Ukraine so they can return home sooner.

Others may have applied but then changed their minds, deciding to stay where they are or travel elsewhere.

And some will be waiting for everyone in their family to receive permission to travel letters or visas before they depart for the UK.

Brits wishing to host people under the Sponsorship Scheme hit out at delays, accusing the Home Office of “the dog ate your visa” style excuses.

Six in 10 visa applications made under the Homes for Ukraine Sponsorship Scheme have been granted, the figures show.

Last week, fewer than than half (45%) of the applications via this route had led to visas issued.

There has been widespread concern about the length of time it has taken for visas to be issued to refugees under the scheme.

In an email sent to those registered for the Homes for Ukraine scheme last Thursday, the Government acknowledged that some Ukrainian refugees have been waiting almost three weeks for their visa applications to be progressed or for a decision, calling this “unacceptable”.

It said: “We are speeding up the processing of visas and, having prioritised family visas in the first instance, we are now working to accelerate the award of visas under Homes for Ukraine.”

A group of would-be sponsors in the UK said they are hearing stories of “lost visas”, frustrations at a lack of information, and MPs lobbying “fruitlessly” on behalf of their constituents.

They said they are particularly concerned about a growing number of cases where some family members have received visas while others are still waiting, despite applying at the same time.

One potential sponsor said: “We’re tired of the ‘the dog ate your visa’ type excuses the Home Office is using.

“This time-lag will cost lives. I’ve promised my home to a family and every night I worry that I will wake up to the news they will never be coming.”

The group will hold a vigil outside the Home Office on Saturday, which will mark five weeks and one day since the Homes for Ukraine scheme started accepting visa applications.

Baroness Finlay of Llandaff said delays with the scheme have been “demoralising” for refugees and changes must be made to it so families are processed together.

The crossbench peer is offering her Cardiff home to a fleeing Ukrainian family but has waited over a month for all of their visas to be cleared.

She said it is understandable that refugees with visas may not yet want to make the journey to the UK, but they may also be facing travel issues and be put off by the UK’s “unfriendly” approach to immigration, including the Government’s new policy of sending some asylum seekers 4,000 miles to Rwanda.

“These are completely separate schemes, I know they are, but the overall message is not good,” she said.

The British Red Cross repeated its calls for the Government to lift visa requirements so more people can reach the UK quickly.

Alex Fraser, director of refugee support and restoring family links, said the process is taking “far too long” and has “delayed or deterred many people from seeking safety in the UK”.

He said: “In our view, the quickest way to help people right now is for the UK Government to stop the need for visas for those fleeing Ukraine, this would also bring the UK in line with a great many other countries who have been doing this since the start of the crisis.

“Security checks would still happen on arrival, but this would free up the capacity of the authorities to help people as they arrive, instead of wading through visa applications.”

A Government spokeswoman said: “The changes the Home Office has made to streamline the visa system, including simplifying the forms and boosting staff numbers, are working and we are now processing visas as quickly as they come in – enabling thousands more Ukrainians to come through our uncapped routes.”