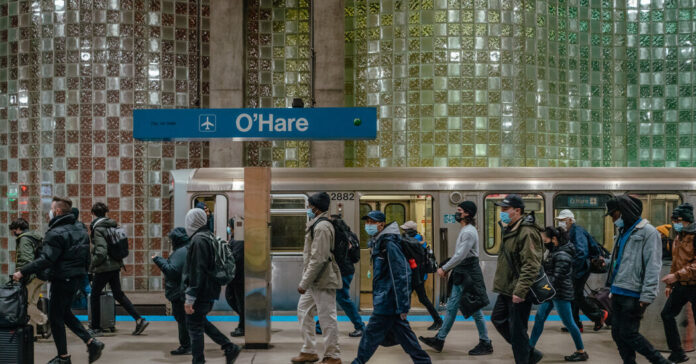 It began in midair. Shortly after a federal judge struck down mask requirements on planes, pilots got on intercoms to share the news, and some passengers tore off their masks with whoops and glee.

Jonathan Russell Biehl, a pilot for Delta, was halfway from Tampa to Minneapolis on Monday night when the announcement came. “The day I’ve been waiting for,” he called it. But on another flight bound for Los Angeles, Brooke Tansley, who was flying with two children too young to be vaccinated, said she felt scared as the passengers around her slipped off their masks. “All I could do was hope it’s going to be OK,” she said.

By Tuesday, more than a year after the country imposed strict masking requirements on airplanes and public transportation to combat the spread of the coronavirus, a judge’s determination that the federal government had overstepped its boundaries rippled across the country. The unexpected ruling by one judge in Florida instantly reshaped travel for millions while sharpening political divisions over the virus and sowing new confusion over where, exactly, Americans now need to mask up.

As much as ever, the country’s pandemic rules are a confounding patchwork. Mask requirements were toppled for many subways, buses and ride-share services. But the rules remained in place in several major cities. Subway riders in New York City were still required to wear facial coverings, but New Jersey Transit riders just across the Hudson River were allowed to take theirs off. In Philadelphia, where officials had reinstituted an indoor mask requirement this week, people were allowed to go maskless on trains and buses.

“Up to them,” President Biden told reporters in New Hampshire on Tuesday when he was asked whether people should continue to wear masks.

Many domestic airlines hurriedly adjusted their policies to make masks optional after the Transportation Security Administration said it would stop enforcing mandates, while some European carriers that operate in the United States, including Air France and Lufthansa, kept mask rules in place.

Discordant messages from Washington added to the uncertainty. The administration’s Covid-19 response coordinator, Dr. Ashish K. Jha, said on Twitter he was disappointed in the judge’s ruling and would continue wearing a mask on flights. And the Biden administration announced on Tuesday that it intended to appeal the ruling by Judge Kathryn Kimball Mizelle, an appointee of President Donald J. Trump, but only if the Centers for Disease Control and Prevention decides that extending a masking measure on public transportation is necessary. This month, shortly before the mandate had been set to expire, federal officials extended it into early May.

In most facets of American life, masks became optional weeks or months ago. The largest exceptions had been airports and public transportation, along with medical facilities. But across the country on Tuesday, the decision was quickly reshaping travel and commutes for millions of Americans.

In Las Vegas, passengers and flight crews passed through security checkpoints unmasked at Harry Reid International Airport, walking past freshly outdated signs that read, “Masks required!” At one ticket counter, an agent checking passengers’ luggage wore a mask while a colleague working next to her was barefaced.

Lois Strickland, a track and field coach flying home to Maryland from a vacation in New Orleans, said she was relieved to be able to fly unmasked. “I’m tired of it, OK?” she said. “I’ve already had Covid. I’ve already been vaccinated. It doesn’t make sense.”

But many public health officials reacted with alarm, warning that new infections, while low, are edging back up.

In interviews, older Americans, people with compromised immune systems, parents with young children and low-income workers who rely on public transportation worried that they would now be at even greater risk with every bus ride or plane trip.

“It’s isolating,” said Catherine Muskin, a lawyer in Ithaca, N.Y., and a mother of a 3-year-old and 20-month-old. She said the end of airline mask mandates had killed any hopes she and her husband had of flying to Florida for a vacation. “We still have our protocols and we still have our rules. But now we’re the exception.”

The new mask rules arrived amid some hopeful pandemic news. Case reports have plummeted since the Omicron variant first swept over the country around New Year’s, and fewer Americans are hospitalized with Covid-19 than at any point since reliable data collection began in spring of 2020. Deaths have also fallen rapidly in recent weeks, from more than 2,600 reported each day in early February to fewer than 500 a day over the past week.

But there remained ample, and growing, reason for concern about the weeks ahead.

New case reports are low but rising, and are believed to be a significant undercount because of the popularity of at-home tests that are often not included in official tallies. Two new versions of Omicron, both of which evolved from the subvariant BA.2, have been spreading rapidly in New York and worrying scientists.

The latest case uptick has been especially steep on the East Coast and around the Great Lakes. New case reports, though still a small fraction of their winter peak, have more than doubled over the past two weeks in Michigan, New Hampshire and Pennsylvania.

Those increases made the judge’s ruling all the more alarming, several public health experts said.

“I think it’s extremely shortsighted, and if I were impolite, would say kind of stupid,” said Dr. Lakshmi Ganapathi, who teaches pediatrics at Harvard Medical School. Given the uptick in cases occurring now, she said, “This ruling is ill-timed, and it’s not commensurate with public health principles.”

Dr. Robert Wachter, who chairs the department of medicine at the University of California, San Francisco, and has recently said it is time to lift mask requirements, said the government needed to have the authority to issue mandates during public health crises. He called on the Biden administration to challenge the ruling.

“If this becomes a precedent, that a judge can overrule government and C.D.C. experts, that puts us in a problematic place for the next surge, the next pandemic, bioterrorism or who knows,” Dr. Wachter said. “Government needs to be able to act, and to imply government does not have that authority is deeply concerning.”

The decision, for some, meant relief.

“It feels good finally to get on a plane and not have to worry about having to pull it up, don’t drink your water too much, don’t eat,” said Frank Kozlowski, who flew into Michigan with a face covering on Monday night and was getting ready to return home to Florida without one on Tuesday.

But the ruling also deepened divisions about how to approach the pandemic, and about what role government rules should play. To Candice Bailey, who works in education, the abrupt change felt premature. She wore her mask while at the New Orleans airport on Tuesday to catch a plane back to Greensboro, N.C.

“There’s a lot more, a lot more information that’s probably needed before you can make that determination, definitely with the new variants that keep popping up,” Ms. Bailey said.

Dr. Rebecca Lee Smith, an epidemiologist at the University of Illinois, said her family had been weighing whether to drive or fly for a vacation this summer, but has now settled on driving because she has a child who is not old enough for a vaccine.

The ruling on masks was especially unfortunate, she said, because some people at higher risk of severe illness might have no choice but to take public transit to work or medical appointments.

“We need to protect the people who have to use these, who may not have other protections,” said Dr. Smith, who spoke Tuesday while riding on a commercial bus in Illinois where she said everyone was wearing a mask.

At least 60 percent of adults supported keeping a mandate in place, according to a Harris Poll conducted this month. But amid the shifting rules and mixed data, some travelers said they did not really know what to think.

At a check-in counter for Spirit Airlines at the Atlanta airport, Juston Stills was not wearing a mask on Tuesday, but said he planned to put one on before his flight to Fort Lauderdale, Fla. For the past few months, Mr. Stills said, he has been deciding whether to wear a mask from situation to situation. In small groups he does not wear a mask. At his daughter’s school and on public transit he wears one.

“I’ve been going with the vibes because really no one knows what’s going on since we have no clear direction from our governors, the president, the C.D.C.,” he said. “When it comes to the pandemic, like, what are we doing right now?”

In the absence of a national mandate, airport operators and transit systems were left to make their own decisions, adding to the sense of confusion.

The Port Authority of New York and New Jersey, which operates the three major airports in the New York metropolitan area as well as interstate buses and bus terminals, said it would follow the local guidance in each state. Mask mandates remained in effect at their two airports in New York, Kennedy International Airport and La Guardia Airport, but not at Newark Liberty International Airport in New Jersey.

Some large public transit systems, including those in New York and San Francisco, chose to keep mask rules in place. In Milwaukee, officials said on Tuesday morning that masks would be optional for bus riders, before changing their minds and reverting to a mandate for the evening rush hour. But systems in Boston, Atlanta, Washington and Philadelphia allowed riders to drop their masks, as did the nationwide Amtrak rail system.

Signs did not always keep up with shifting rules. At the airport in Grand Rapids, Mich., messages continued to tell travelers on Tuesday that masks were required, though most passengers and employees wore none.

“I’ve been vaccinated, so I don’t feel extremely uncomfortable at the counter,” said Tiffani Harrington, an airline customer service agent in Grand Rapids who went unmasked despite some apprehension.

Two years into a pandemic, it was a big change. “I feel like I forgot how to use my facial features for customer service,” Ms. Harrington said. “I’ve got to relearn how to smile.”

On all sides of the debate, confusion abounded.

At O’Hare International Airport in Chicago, Joseph Suaznabar had just arrived barefaced on a flight from Richmond, Va., on Tuesday. But when he went to board an “L” train to head toward the city, on a transit system where a mandate remained in place, he had to put his face covering back on.

“I just try to do what I’m told, but it’s hard to know what to do anymore,” Mr. Suaznabar said. “It seems like a mixed message to me, and the rule may come and go again like a roller coaster.”

By Tuesday night, the “L” train mandates in Chicago had been lifted too.