Trump Hotel Sale in Washington Will End an Era 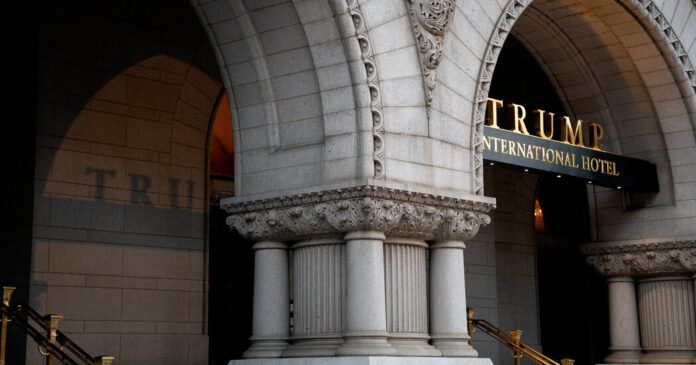 The Trump family took out a $170 million loan from Deutsche Bank in 2014 to finance renovations to the building. But even after that loan is paid off and various payments the family made to cover operating losses are accounted for, the family will generate a profit of about $100 million, House investigators estimated after the sale was announced.

The pandemic, followed by Mr. Trump’s departure from the White House, had already resulted in a significant decline in business at the hotel, which is perhaps most famous for its sprawling lobby, set up in a nine-story skylit atrium with giant crystal chandeliers that hang over a collection of couches, leather chairs and lounge furniture.

The downturn was evident on the menu at the hotel’s Benjamin Bar and Lounge, as the $120 Trump Tower — a one-pound lobster, eight oysters, four clams and shrimp — and other high-end items disappeared. The Brioni boutique, an outlet of the luxury Italian suit maker whose customers included Mr. Trump, has moved out, while the Ivanka Trump spa is closed and BLT Prime, the main restaurant, will most likely soon close, too.

But the hotel still draws conservative political activists and lobbyists. On one recent evening, nearly two dozen pork farmers and producers who were in Washington to lobby Congress sat across from a Republican women’s group, sipping on cocktails and glasses of chardonnay.

Others in the lobby included out-of-town tourists who wanted to see the hotel before the Trump name is ripped from the facade.

“May the name of Moses be stricken from every pylon,” said Suzanne McCafferty, a Trump supporter visiting from Nashville, in a joking reference to a line referring to the character played by Charlton Heston in “The Ten Commandments,” the 1956 film. “When they take his name down, the people in power here now are going to be very happy, I am sure.”