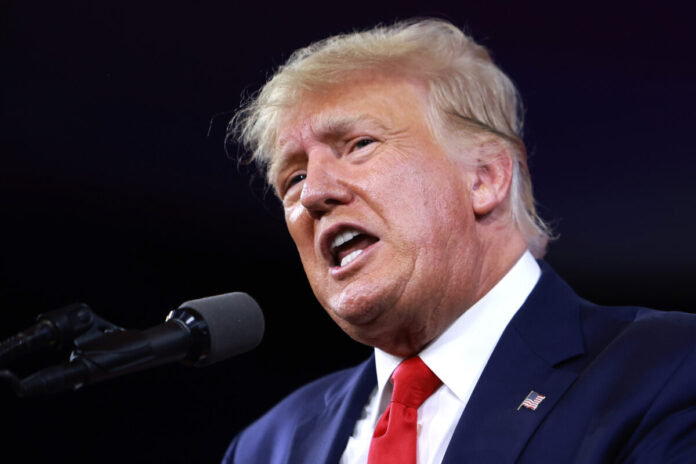 Former President Donald Trump on Monday called on Russia and Ukraine to reach an agreement to end the war, which began on Feb. 24.

Trump said on the 55th day of Russian President Vladimir Putin’s invasion of Ukraine that “it doesn’t make sense that Russia and Ukraine aren’t sitting down and working out some kind of an agreement.”

“If they don’t do it soon, there will be nothing left but death, destruction, and carnage,” Trump said in a statement.

According to the United Nations Humans Rights Office of the High Commissioner (OHCHR), as of April 18, at least 2,072 Ukrainians have been killed and 2,818 have been injured (pdf) since Putin launched a full-scale invasion against neighboring Ukraine.

The OHCHR believes that the actual figures are considerably higher,

“This is a war that never should have happened, but it did,” Trump said.

He added, “The solution can never be as good as it would have been before the shooting started, but there is a solution, and it should be figured out now—not later—when everyone will be DEAD!”

Nearly two months since the invasion first began, negotiations between Ukrainian and Russian diplomats have been so far unsuccessful.

Ukrainian President Volodymyr Zelenskyy said Sunday that he is prepared to speak with Russian authorities if there is an opportunity to do so, but that he wouldn’t do so under a Russian ultimatum.

The leader said he believes that the sooner peace talks begin, the fewer casualties there will be.

Zelenskyy said talks so far have been unsuccessful, and that the chances for holding talks are decreasing daily.

“Think about Bucha, Volnovakha, Borodianka, Mariupol. There comes a time when no one wants to talk. Our society does not want us to continue negotiations,” Zelenskyy said.

Meanwhile, Russian forces launched a new offensive push along most of Ukraine’s eastern flank on Monday.

Zelenskyy declared Monday that the “Battle of Donbass” has now begun.

“We can now say that Russian forces have started the battle of the Donbass, for which they have long prepared,” Zelenskyy said in a video address.

In a post on Facebook, the Ukrainian armed forces command said that Russia’s main military force was concentrating on taking control of the entirety of the Donetsk and Luhansk regions that make up the swathe of land known as the Donbass.

“The second phase of the war has begun. … Believe in our army, it is very strong,” the Ukrainian president’s chief of staff, Andriy Yermak, wrote on the Telegram messaging app.

Zelenskyy vowed Ukrainian forces would defend the Donbass “no matter how many Russian soldiers” were sent by Putin.

The leader has said that he wouldn’t be willing to give up any part of Ukraine for peace.