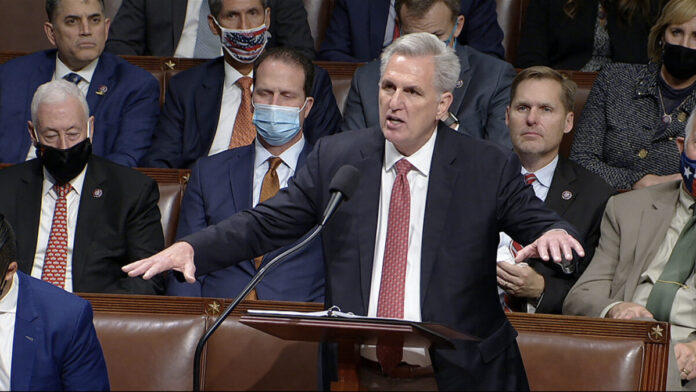 A proposal by House Republicans to impose term limits on committee leadership assignments is frustrating senior Democrats, many of whom could be forced out of their positions if the plan is successful.

The GOP plan, first reported on April 18 by Punchbowl News, would limit committee leaders from both parties to three terms in their positions if Republicans take back the House in the upcoming midterm elections, which they are expected to do.

For Republicans, who have enforced such a rule within their own caucus since 1994, this would be nothing new. However, Democrats have no such rule—under the GOP proposal, the term limit rule would be extended to both parties in the lower chamber.

The proposal would mark a substantial shift in a longstanding custom that generally permits leaders in each party to decide for themselves how committee assignments will be doled out.

However, House Minority Leader Kevin McCarthy (R-Calif.) has said in the past that Democrats were the first to break precedent, and suggested that Republicans will be more than happy to follow suit.

“Democrats are preparing once again to break another precedent of the United States House of Representatives,” McCarthy said ahead of a vote on Nov. 17, 2021, to censure Rep. Paul Gosar (R-Ariz.) and strip him of his committee assignments over a controversial video the lawmaker posted to Twitter. “The speaker is burning down the House on her way out the door.”

McCarthy has noted Democrats’ unwillingness to censure their own Rep. Ilhan Omar (D-Minn.) after she went to Minneapolis during the summer 2020 riots to encourage rioters to “stay on the streets” and “show them we mean action.”

“This side of the aisle didn’t ask for [Omar] to lose her committee,” McCarthy said. “We simply asked for an apology.”

In an indication that Republicans may follow the precedent set by the censure motion, McCarthy said, “What [Democrats] have started cannot be easily undone.”

Omar and others, McCarthy added, “Will need the approval of a majority to keep [their committee] positions in the future.”

On the other hand, the effort doesn’t seem to be exclusively supported by Republicans.

Though many senior Democrats are hesitant to give up their committee authority, some factions within the party have sought for years to impose term limits.

In an April 18 tweet, Rep. Dean Phillips (D-Minn.) said: “High functioning organizations become so by building strong benches and limiting the tenure of leaders, usually ~10 years. No matter which party controls Congress in ‘23, we should adopt term limits for committee chairs & get serious about developing a new generation of leaders.”

Prior to the 2006 midterm elections, Democrats also had rules in place governing term limits, but these were undone following the results of that election. In 2018, amid a wave of fresh faces in the Democrats’ caucus, debates over term limits again cropped up, with many junior lawmakers hopeful for the chance to prove themselves.

Speaker of the House Nancy Pelosi (D-Calif.) agreed at the time to cap her speakership at four years—meaning that this is the last term that she will be eligible for the post, but other senior Democrats—including House Majority Leader Steny Hoyer (D-Md.) and House Majority Whip Jim Clyburn (D-S.C.)—were less willing to grant any such concessions.

While Pelosi was hammering out the details of her own term limit, Hoyer told the press that he wanted nothing to do with the concessions, emphasizing that he remained opposed to placing term limits either on leadership roles or committee chairs.

“I am not for term limits,” he repeated, emphasizing each word.

In view of this stiff opposition from leaders in the majority party, it seems unlikely that the party will make an internal decision to impose term limits in the near future. It remains to be seen whether the GOP plan will come to fruition, and whether it will have McCarthy’s support if his party regains the lower chamber.

McCarthy’s office could not be immediately reached for comment.