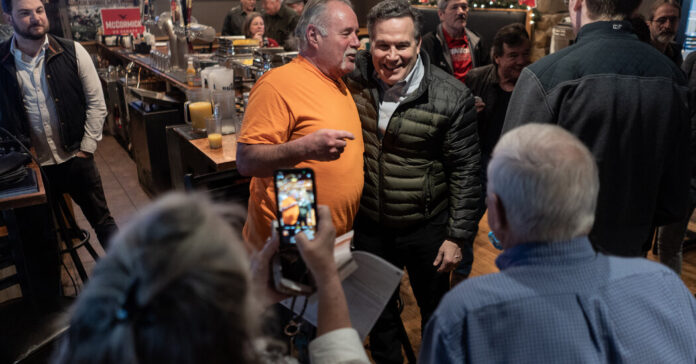 We can say this much with confidence about David McCormick: The man is rich.

In ads and campaign appearances, McCormick, who is running in the Republican primary for a Pennsylvania Senate seat, emphasizes his roots in Bloomsburg, a small town along the state’s Susquehanna River.

But his personal financial disclosure statement, which is required of all candidates for federal office, paints the picture of a consummate New York and Washington insider.

Last year alone, McCormick pulled in more than $22 million in salary from Bridgewater Associates, the Connecticut hedge fund where he was chief executive until stepping down in January. He sold options in Bechtel, a politically connected global construction firm where he was a board member, for an additional $2.2 million. For serving on the board of In-Q-Tel, a nonprofit venture capital firm close to the U.S. intelligence community, he earned $70,000 more. (McCormick is also a member of the Defense Policy Board, and maintains a security clearance.)

And that’s just income. Because federal disclosure forms require candidates to list assets only within broad ranges, it’s not possible to calculate McCormick’s net worth with any precision. But this much is clear: If McCormick were to win the Senate seat, which is being vacated by the retiring Pat Toomey, he would rank among the wealthiest members of Congress.

The same would be true of his top rival, Mehmet Oz.

Winning against Oz, Carla Sands and Jeff Bartos in next month’s primary won’t be an easy task. Oz, the celebrity doctor, last week won Donald Trump’s endorsement, despite McCormick’s assiduous efforts to court the former president. An average of public polls shows McCormick clinging to a lead of around 4 percentage points, though it’s worth noting that polls of statewide races are famously unreliable.

McCormick is married to Dina Powell McCormick, a former Trump administration official who now works for Goldman Sachs. The couple listed assets worth between $116 million and $290 million, and possibly more.

They own a Christmas tree farm in Pennsylvania, which once belonged to his parents; a ranch investment property in Colorado; and rental properties in several other cities. McCormick often mentions the farm, which he bought 10 years ago, in his campaign ads and appearances. He has expanded it to grow soy and other crops, the campaign says, but with a value listed at $1 million to $5 million, it represents just a fraction of his wealth.

The couple has tens of millions distributed across various funds — notably, they have at least $50 million worth of stock in Bridgewater, his former employer. McCormick has faced questions about the firm’s investments in China, as well as about its handling of teacher pensions in Pennsylvania.

McCormick is also an investor in ArcelorMittal, a multinational steel company that competes with the Pittsburgh-based U.S. Steel — via a revocable trust, a type of trust that can be amended during life and that is often used to manage assets and avoid probate at death.

The McCormicks’ liabilities similarly showcase their extraordinary wealth and connections.

They listed between $20 million and $93.5 million in liabilities, including for two mortgages and a line of credit of up to $25 million. Their other liabilities are for various “capital commitments,” meaning potential private equity investments, including as much as half a million dollars to Revolution’s “Rise of the Rest” seed fund.

The fund, run by the AOL founder Steve Case, invests in start-up companies outside of the usual Silicon Valley and East Coast haunts. Among the fund’s investors are Jeff Bezos, the Amazon founder; Gov. Glenn Youngkin of Virginia; Eric Schmidt, the former Google chief executive; James Murdoch, the son of the Fox News founder Rupert Murdoch; Tory Burch, the fashion designer; and David Rubenstein, a founder of the Carlyle Group.

One interesting coincidence here: J.D. Vance, who was once a managing partner at Revolution, is now a candidate for Senate in neighboring Ohio. Vance’s rags-to-riches personal story, as detailed in his book “Hillbilly Elegy,” was integral to the fund’s sales pitch.

Although Vance is nearly 20 years younger, the two men have led remarkably parallel lives. Like McCormick, Vance served in the U.S. military and went on to earn an Ivy League education before starting a career in finance. Both reinvented themselves as MAGA warriors as they decided to run for Senate seats in the Midwest.

But Vance scored Trump’s endorsement, while McCormick did not.

In Pennsylvania, McCormick has fought bitterly with Oz, trading accusations over which man has closer ties to China, who is a more committed conservative and who is the more authentic representative of the state. Each has plowed millions of his own money into the Senate contest — with McCormick having donated nearly $7 million to his campaign, and Oz contributing more than $11 million to his effort.

McCormick has benefited from his Wall Street ties. More than 60 executives at Goldman Sachs have contributed the maximum allowable amount to his campaign, according to a Bloomberg analysis.

A super PAC supporting McCormick, Honor Pennsylvania, has raised $15.3 million. Nearly a third of that money has come from Ken Griffin, a billionaire hedge fund manager who backs Republican candidates. Another of the super PAC’s donors is Harry Sloan, a former MGM executive who backed Hillary Clinton’s presidential bid in 2016.

Intriguingly, Arjun Gupta, the founder and “chief believer” of TeleSoft Partners, also chipped in $100,000. He usually donates to Democrats. McCormick’s disclosure statement indicates that he is a limited partner in a TeleSoft investment fund. Until McCormick decided to run for office, both men were trustees of the Aspen Institute, a think tank that aims to “solve the greatest challenges of our time.”

After assault accusations, an ad with … pig jokes

Two new television ads in Nebraska signal how sexual assault accusations against the Republican front-runner for governor will play out in the final weeks of the campaign.

Neither the ad by the front-runner, Charles Herbster, nor the one from his top Republican rival, Jim Pillen, mentions the accusations. Not directly, at least.

Herbster, who was accused of groping several women including a Republican state senator, has denied the allegations in a radio interview and on Twitter.

“Just like the establishment attacked President Trump, now they’re lying about me,” said Herbster in the ad he released, which quickly moved on to other issues. Herbster, a farmer and wealthy businessman, has Trump’s backing in his bid to replace Gov. Pete Ricketts, who is term-limited.

The ad from Pillen, who is also a farmer and wealthy businessman, features his young grandchildren asking him political questions. He responds with short, pig-inspired answers. Do you want to cut property taxes? “Whole hog.” Do politicians spend too much? “Like pigs at a trough.” Ban homework? “When pigs fly.” The scene seems intended to convey that Pillen is not only a conservative, but a guy you can trust around your family.

As Jonathan Weisman reported, Republican candidates in several states are facing allegations of sexual assault and domestic violence — yet few of their primary rivals, even in competitive races, want to talk about it.

On Tuesday, Trump announced he would hold a rally in Nebraska at the end of April. A guest speaker: Herbster.