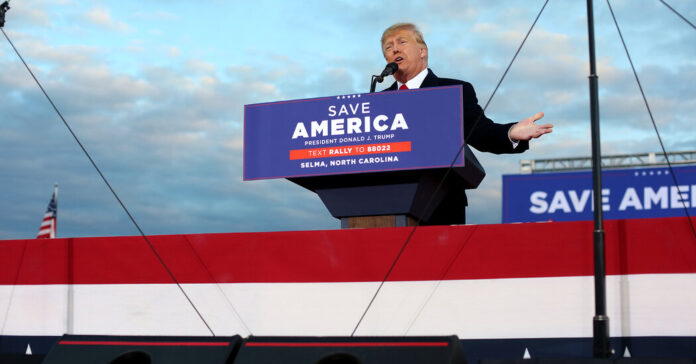 Mr. Bannon, Mr. Lindell and Mr. Epshteyn have repeatedly promoted decertification at the state level on Mr. Bannon’s podcast, “War Room,” since last summer, pushing it as a steady drumbeat and at times claiming that it could lead to Mr. Trump being put back into office. They have described the so-called audit movement that began in Arizona and spread to other states as part of a larger effort to decertify electoral votes.

“We are on a full, full freight train to decertify,” Mr. Epshteyn said on the program in January. “That’s what we’re going to get. Everyone knows. Everyone knows this election was stolen.”

Debating a criminal referral. The Jan. 6 House committee has grown divided over whether to make a criminal referral of former President Donald J. Trump to the Justice Department, even though it has concluded that it has enough evidence to do so. The debate centers on whether a referral would backfire by politically tainting the expanding federal investigation.

Last fall, 186 state legislators from 39 states joined a letter written by Wendy Rogers, a Republican state senator from Arizona who has appeared at events hosted by Mr. Lindell, calling on “each state to decertify its electors where it has been shown the elections were certified prematurely and inaccurately.”

All the efforts have either failed to progress or been rejected for lack of legal grounds in the absence of any evidence of widespread voter fraud that could have affected the 2020 election. And even as elected Republicans have almost uniformly embraced Mr. Trump’s claims that the vote was stolen, many have rejected the idea that states should decertify their results or argued that the effort was merely symbolic, noting that he could never be reinstated.

Still, Mr. Trump is now the front-runner in public opinion surveys of the possible Republican presidential field. While he has yet to declare his candidacy, he has privately told associates that he is planning to run again.

A spokesman for Mr. Trump did not respond to an email seeking comment.

The legal drive to reverse his 2020 loss has had ripple effects in the Republican Party. With midterm congressional elections less than six months away, the push has put pressure on candidates to either endorse it or risk the wrath of Mr. Trump and his supporters. In Alabama, Representative Mo Brooks said that the former president had repeatedly demanded that he “rescind” the election and remove Mr. Biden. When the congressman said that was impossible, Mr. Trump withdrew his endorsement in the state’s Senate Republican primary.

In Pennsylvania, Jake Corman, the top Republican in the State Senate who promised last year to review the 2020 election results, said he had dropped plans to end his bid for governor after Mr. Trump urged him to “keep fighting.” He then went on Mr. Bannon’s podcast, where Mr. Corman said there was “no question” about the need to investigate whether electors needed to be decertified in battleground states, and pledged to “turn the Department of State upside down” to find evidence of illegality.