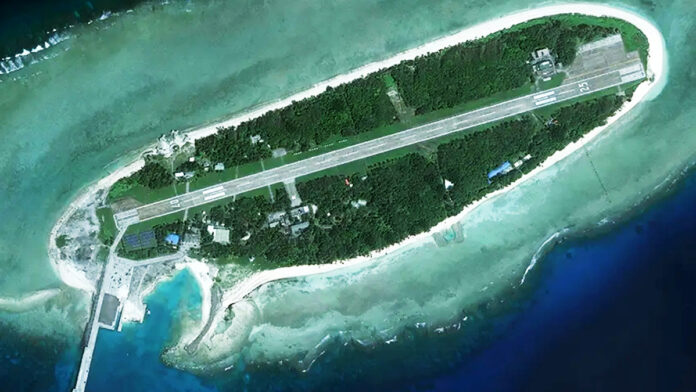 The Taiwanese military plans to extend a runway on a contested island in the South China Sea to accommodate fighter jets, local media reported on Monday, in a move that would likely trigger protests from other claimants.

Taiwan’s government has previously pushed back against suggestions it might militarize the island, Taiping. Taiwan’s air force declined Monday to comment on the report.

Taiping, also known as Itu Aba, is the biggest natural feature in the Spratly islands. It is currently occupied by Taiwan but is also claimed by China, the Philippines and Vietnam.

United Daily News, a conservative newspaper in Taiwan, quoted an unnamed source as saying that the military is planning to finish another round of renovation works on Taiping this year, with an extension of the existing 1,150-meter-long airstrip by 350 meters.

A 1,500-meter runway would be able to accommodate F-16 jet fighters and P-3C anti-submarine aircraft.

Air force spokesperson Chen Guo-hua told RFA Mandarin Service that he was not aware of media reports and had no comment.

If confirmed the news could provoke strong reactions from other claimants of the island.

In March, the Taiwanese Defense Minister Chiu Kuo-Cheng said that Taiwan had no intention of militarizing Taiping despite reports that China had completed building military facilities on three artificial islands nearby.

Taiwanese media had reported in the past about proposed plans to develop the infrastructure on Taiping Island including the runway extension.

The plans were criticized by the Philippines and Vietnam as stoking tensions in the disputed South China Sea.

Taiping is located in the north-western part of the Spratly islands, 1,500 kilometers (930 miles) from Taiwan and 853 kilometers (530 miles) from the Philippines. It is under the administration of Kaohsiung Municipality.

It has been under Taiwan’s control since 1956 but the current runway was only built in 2008. According to a report on the website of the Asia Maritime Transparency Initiative at the Washington-based Center for Strategic and International Studies, “Beijing sees Taiwan’s development work on Taiping Island as a long-term strategic asset.”

“China considers Taiwan to be a part of China and the runway or piers built on Taiping Island may be used by mainland China in the future after reunification of the two sides,” it said.

The international tribunal in the case brought against China by the Philippines in 2016 however ruled that Taiping is a “rock” under the United Nations Convention on the Law of the Sea and therefore not entitled to a 200 nautical mile exclusive economic zone and continental shelf.

Both Taiwan and the People’s Republic of China rejected this ruling.