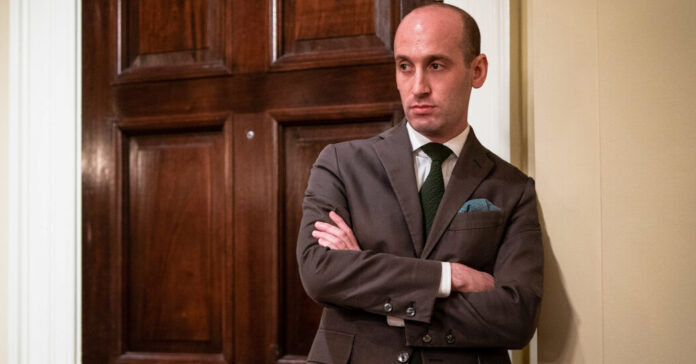 The House committee investigating the Jan. 6 attack on the Capitol spent roughly eight hours on Thursday questioning Stephen Miller, a top White House adviser to former President Donald J. Trump, in an at times contentious exchange that included queries about Mr. Trump’s speech before a crowd the morning of the riot, according to two people familiar with the session.

Investigators asked Mr. Miller repeatedly about the use of the word “we” throughout Mr. Trump’s speech on the Ellipse, outside the White House, on Jan. 6, 2021, the people said, in an apparent effort to ascertain whether the former president had been directing supporters to join him in taking action to stop Congress from certifying his defeat. Mr. Miller argued that the language was no different from any other political speech.

Mr. Miller was Mr. Trump’s top domestic policy adviser and his main speechwriter. He is the latest former White House official to appear before the committee, a day after the former White House counsel Pat A. Cipollone and his deputy, Patrick F. Philbin, appeared. Mr. Miller was subpoenaed in November 2021 but has fought the panel’s efforts to obtain information from him, appearing only after a lengthy negotiation with committee officials.

Mr. Miller did not respond to a message seeking comment. But the two people familiar with his appearance, who spoke on the condition of anonymity about the confidential interview, described the session as heated at times. Mr. Miller invoked executive privilege when asked about his discussions with Mr. Trump, including a phone call that White House records show he had with the former president the morning of Jan. 6, one of the people said.

Among the most contentious exchanges were over a draft of the speech Mr. Trump delivered that morning at a so-called Stop the Steal rally near the White House. Thousands of rally attendees marched from that event to the Capitol, where they stormed the building just as Congress was meeting to formalize Joseph R. Biden Jr.’s Electoral College victory.

Mr. Trump repeatedly used the word “we” in his remarks that day. “We will not take it anymore, and that’s what this is all about,” Mr. Trump said. “And to use a favorite term that all of you people really came up with: We will stop the steal.”

Mr. Miller rebutted the implication that the word “we” indicated that Mr. Trump was trying to incite the crowd to action, one of the people said, arguing that it has been used in political speech for decades, including by President John F. Kennedy in reference to the moon landing.

Another point of contention with Mr. Miller was over Mr. Trump’s false claims of widespread ballot fraud. Mr. Miller, the people familiar with his appearance said, argued that the election had been stolen, claiming that there were several examples of fraud.

Despite his appearance on Thursday, Mr. Miller has assumed an adversarial stance toward the committee. Last month, he sued to block investigators from gaining access to his phone records, arguing in part that the panel was invading his parents’ privacy since he was on their family plan.

The committee is in possession of a draft of Mr. Trump’s speech, in which investigators have taken a particular interest as they explore the incendiary language and whether it encouraged the rally attendees to march on the Capitol.

Debating a criminal referral. The Jan. 6 House committee has grown divided over whether to make a criminal referral of former President Donald J. Trump to the Justice Department, even though it has concluded that it has enough evidence to do so. The debate centers on whether a referral would backfire by politically tainting the expanding federal investigation.

Mr. Miller helped draft the speech, although others on his team were said to have played a more expansive role. Two other speechwriters on the team, Vince Haley and Ross Worthington, have already testified before the committee.

Mark Meadows, Mr. Trump’s final chief of staff, has claimed Mr. Trump ad-libbed the part of his comments in which he told the crowd to march on the Capitol. But the committee has obtained testimony and contemporaneous notes of a former senior White House official that directly contradict Mr. Meadows’s statements, the panel has said.

“That former senior official explained that the president genuinely did wish to walk or drive with the protesters to Capitol Hill at the close of his speech on Jan. 6,” Representative Bennie Thompson, the Mississippi Democrat who is the chairman of the committee, wrote in a letter to Mr. Trump’s elder daughter, Ivanka Trump, asking her to testify.

Mr. Trump also recently acknowledged to The Washington Post that he had wanted to join the march on the Capitol, but that the Secret Service prevented him from doing so. The Times and other outlets reported shortly after the riot that Mr. Trump had wanted to march but had been told he could not.