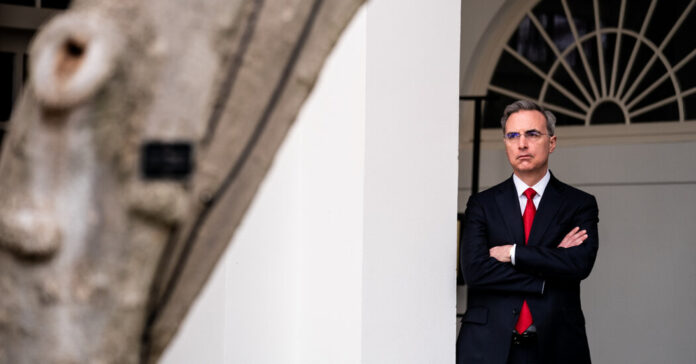 Two of former President Donald J. Trump’s top White House lawyers met virtually on Wednesday with the House committee investigating the Capitol attack, after Mr. Trump authorized them to engage with the panel, according to a person familiar with the matter.

Pat A. Cipollone, the former White House counsel, and Patrick F. Philbin, who was his deputy, met separately with the panel, two people familiar with the sessions said, speaking on the condition of anonymity because they were not authorized to disclose the meetings.

It was not immediately clear how much information Mr. Cipollone and Mr. Philbin had provided to the committee or what they said, but they were present for key moments in the buildup to the storming of the Capitol on Jan. 6, 2021, including pivotal conversations and meetings in which Mr. Trump discussed using the powers of his office to try to overturn the election.

Their cooperation, which was reported earlier by Politico, added to the more than two dozen White House officials who agreed to take the committee’s questions.

The two were not under oath and their interviews were not transcribed, but the men could return for formal interviews or deposition later, one of the people said, describing it as a typical process as investigators determine who they want to question.

The interviews came as the committee learned from the National Archives that lawmakers would receive additional documents from the Trump White House after President Biden declined to assert executive privilege over them.

In a letter on Wednesday, David S. Ferriero, the national archivist, told Mr. Trump that he would turn over a new set of records to the committee within 15 days “unless prohibited by court order.” Mr. Trump wrote to the archives in February to say he asserted executive privilege over more than 1,000 documents in its possession.

Mr. Trump told The Washington Post that he had offered his daughter and son-in-law “privilege,” but they declined it. Courts have rejected Mr. Trump’s claims of executive privilege, and the Biden White House has declined to invoke it for material and witnesses sought by the Jan. 6 inquiry, including for Ms. Trump and Mr. Kushner’s testimony.

The panel has also heard from John McEntee, who served as Mr. Trump’s chief of presidential personnel; Anthony M. Ornato, the former White House chief of operations; and Eric Herschmann, a White House lawyer. Another top adviser, Stephen Miller, was slated to testify on Thursday, according to another person familiar with the matter, who also spoke on the condition of anonymity.

Mr. Miller was subpoenaed late last year and had lengthy negotiations to appear.

Mr. Cipollone, who defended Mr. Trump during his first impeachment trial, pushed back against some of the most extreme plans the president considered for overturning the election. He participated in meetings with Trump allies who were pressing for the military to seize voting machines and in which Attorney General William P. Barr offered his resignation after making clear that the Justice Department had found no widespread fraud in the 2020 election.

Mr. Cipollone also tried to persuade Mr. Trump to stop pursuing baseless claims of fraud. He balked at pursuing a plan proposed by Jeffrey Clark, a Justice Department lawyer, who had wanted to distribute official letters to multiple state legislatures falsely alerting them that the election might have been stolen and urging them to reconsider certified results.

“That letter that this guy wants to send — that letter is a murder-suicide pact,” Mr. Cipollone told Mr. Trump, according to testimony the panel has received. “It’s going to damage everyone who touches it. And we should have nothing to do with that letter. I don’t ever want to see that letter again.”

Mr. Philbin, who was a senior Justice Department lawyer under President George W. Bush, was also present for the meeting in which Mr. Barr offered his resignation.

The Supreme Court has ordered the National Archives to turn over to the committee Mr. Philbin’s White House records, which include a memo about a potential lawsuit against several states that Mr. Biden won in the 2020 election. They also contain a series of emails from a state official regarding election-related issues and talking points on alleged election irregularities in a county in Michigan.

And they include a plan pushed by Michael T. Flynn, Mr. Trump’s first national security adviser, and the lawyer Sidney Powell to declare that there was foreign influence in the election, with the goal of allowing Mr. Trump to use the powers of the Defense Department to seize voting machines and have the votes recounted.