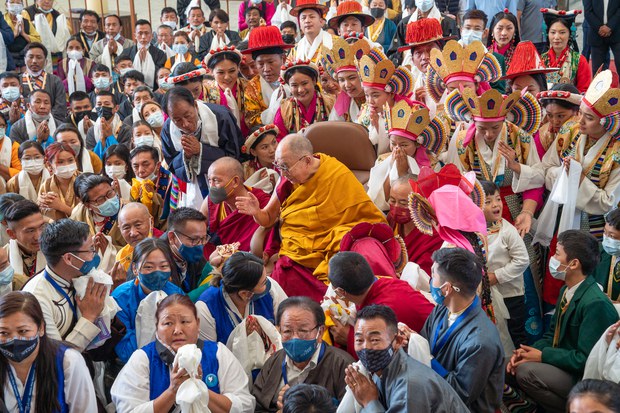 A Middle Way approach to the question of Tibet’s status under Beijing’s rule does not concern politics alone and will benefit both the Tibetan and the Chinese people, Tibetan spiritual leader the Dalai Lama said in a rare political statement in India this month.

“The Middle Way approach is not just a political and administrative approach,” the Dalai Lama said, speaking on April 7 at a traditional Shoton, or Yogurt, Festival held in Dharamsala, India, seat of Tibet’s exile government, the Central Tibetan Administration (CTA).

“Instead, it is a practical approach and mutually beneficial to both Tibetans and Chinese, in which Tibetans can preserve their culture and religion and uphold their identity. We cannot resort to violence and banish the Chinese from our lands,” the Dalai Lama said.

Formerly an independent nation, Tibet was invaded and incorporated into China by force more than 70 years ago. And in the debate over how best to advance the rights of Tibetans living under Beijing’s rule, some Tibetans have called for a restoration of the country’s former independence.

The CTA and the Dalai Lama, however, have adopted a policy approach called the Middle Way, which accepts Tibet’s status as a part of China but urges greater cultural and religious freedoms, including strengthened language rights, guaranteed for ethnic minorities under the provisions of China’s own constitution.

“Despite the Chinese government’s continuous oppression of Tibetans inside Tibet, Tibetans have endured it all,” the exiled spiritual leader said. “So Tibetans in exile must work hard. China’s brutal policies will not last long, and will someday change.”

The Tibetan struggle for greater freedoms has been a struggle lasting over generations, the Dalai Lama said. “So older Tibetans must nurture the younger generations of Tibetans, to whom we can pass on our Tibetan language, culture, and religious and traditional beliefs.”

Nine rounds of talks on greater autonomy in Tibetan areas of China were held between envoys of the Dalai Lama and high-level Chinese officials beginning in 2002, but stalled in 2010 and were never resumed.

Formerly Tibet’s traditional ruler, the Dalai Lama has made few political statements in public since handing his political responsibilities over to an elected exile leader, or Sikyong, in 2011 and now considers himself only Tibet’s spiritual leader.

The Dalai Lama continues to work hard for the good of his people, though, said Marco Respinti, director-in-charge at Bitter Winter, an online magazine monitoring religious freedom in China. “And the good of the Tibetan people should be something achievable, not just some utopia,” Respinti said.

“While the Chinese Communist government is literally waging a cultural genocide against the Tibetans, and the Uyghurs and the Mongols, the Dalai Lama has taken on himself the moral responsibility both to stop the horror and to get something concrete done.

“The Middle Way approach tries to keep these two things together, envisioning a future of interactions and exchanges,” Respinti said.

China’s Communist Party remains determined to destroy Tibet’s national and cultural identity though, and seeks only “total surrender to its totalitarian power,” Respinti said. “The Middle Way approach is the last noble chance that Tibetans can offer to the CCP, but the CCP has no intention of taking it.”