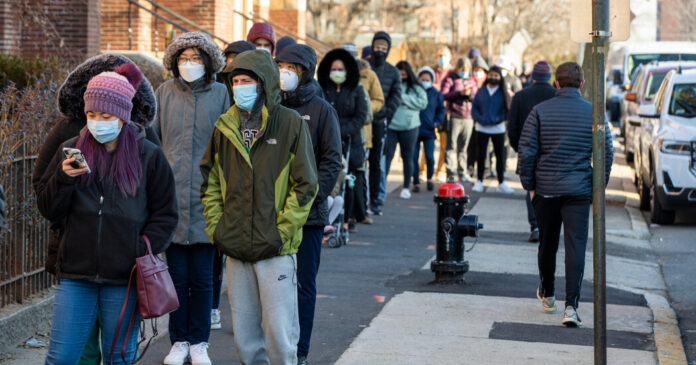 The Biden administration extended the U.S. coronavirus public health emergency, now more than two years old, for another 90 days on Wednesday. The move will maintain a range of health benefits received by some of the most vulnerable Americans during the pandemic, including access to coronavirus tests and telehealth services.

The decision to extend the emergency was expected, public health experts said, even though top federal health officials have said the nation was now in a favorable position, with fewer people hospitalized for Covid-19 lately than at any time since the early weeks of the pandemic.

The Department of Health and Human Services made a commitment at the beginning of President Biden’s term to give the states at least two months’ warning before allowing the emergency declaration to lapse. Some governors have asked for even more time to prepare. The latest extension pushes back the expiration to mid-July.

Republican lawmakers called on the administration in February to stop extending the emergency, which was first declared by the Trump administration, saying that its continuation at a time when the crisis was ebbing amounted to government overreach.

Since then, a highly transmissible version of the virus, the Omicron subvariant known as BA.2, has become the dominant form among new U.S. cases, which have started ticking up again. As of Tuesday, the nation was reporting more than 31,000 new cases a day on average, 8 percent more than two weeks before, according to a New York Times database.

New York City and Washington, D.C., are among the parts of the country where the recent increases have been sharper, though the case counts have not approached the peaks seen in the winter Omicron surge. Reported cases may be an undercount of the virus’s true spread to some degree, since access to at-home tests has increased and the results of such tests are often not reported to state health officials.

Public health experts say the emergency declaration has offered a lifeline to people who might otherwise have lost health coverage. A key provision has allowed people covered by Medicaid, which saw record levels of enrollment during the pandemic, to stay in the program without going through the usual paperwork checks — and even if their incomes had risen above the normal ceiling for eligibility.

Juliette Cubanski, a deputy director of the Kaiser Family Foundation who has researched and written about the effects of the public health emergency, said the extension announced on Wednesday meant that the U.S. health care system had at least another few months to plan for when its protections would end. The emergency declaration, she said, “has given us a tremendous sense of security in an otherwise very insecure and uncertain time.”

“While we can’t live in a state of public health emergency forever, there’s still a bit of uncertainty about whether we are ready as a health care system to do without the flexibilities” it offers, Ms. Cubanski said.

Private insurers and Medicare will continue to cover the cost of at-home virus tests as long as the public health emergency remains in effect.

The emergency has helped Medicare recipients substantially in other ways, notably by expanding eligibility for telehealth appointments at a time when some doctors’ offices were temporarily closed, leaving older and more vulnerable people struggling to see doctors in person, or hesitating to take the risk. If the emergency declaration lapsed, many Medicare beneficiaries who did not live in rural areas or enroll in Medicare Advantage plans could have lost access to telehealth services.

“It’s meant the ability to access care that otherwise would have been inaccessible,” Ms. Cubanski said. Using telehealth, she added, has “kept people from serious health consequences that they might have otherwise suffered.”

The emergency declaration has also allowed hospitals to receive a 20 percent bump in Medicare payment rates for treating Covid-19 patients, at a time when many providers faced crushing financial pressures.