A Close Examination – The Diplomat 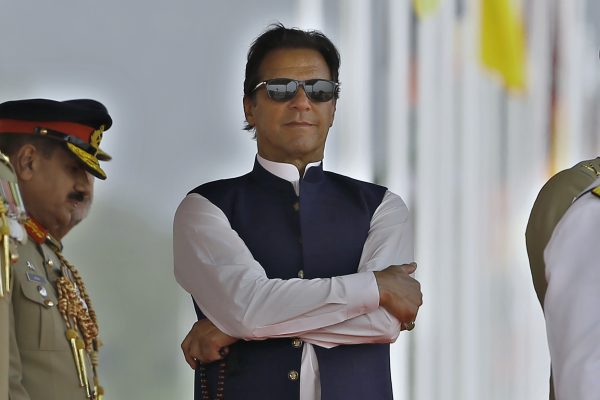 As I write, a complete swap of places is taking place in Islamabad: The united opposition is becoming a new government, and parliamentarians of the former ruling party, Pakistan Tehreek-e-Insaf (PTI), are resigning, as their government lost a recent no-confidence vote. The party and its leader, Imran Khan – until recently the country’s prime minister – are still claiming that what happened was not just a loss of majority due to some of the lawmakers’ change of sides. What caused this treachery, they claim, was an American plot to topple the Khan government.

There is no publicly available evidence to support Khan’s theory, as careful scrutiny reveals.

The Story According to Imran Khan

According to Khan, the Americans toppled his government because he refused to cancel his late February visit to Moscow. The visit took place on February 24, the same day Russia began its bloody invasion of Ukraine. The trip, Khan and his foreign minister would stress, had been planned in advance and thus only coincidentally fell on the date of the invasion. Foreign Minister Shah Mahmood Qureshi also claimed that the U.S. national security advisor made a call to his Pakistani counterpart asking Islamabad to cancel the visit.

Khan refused to cancel or postpone his plans. The visit went as scheduled; Khan even laid a wreath at the Tomb of the Unknown Soldier in Moscow while Russian soldiers were entering Ukraine. This adherence to an independent foreign policy, he claimed later, irked the Americans, who then conspired to change the government in Islamabad to a more pliable one.

Certain Pakistani lawmakers, it was said, had been meeting with the Americans and were bribed to topple Khan’s government. On March 8, Pakistan’s united opposition moved a no-confidence motion against the government, but at that time the ruling side had a majority. Then, on March 30, a portion of ruling coalition parliamentarians suddenly crossed to the opposition and the rug of majority was pulled from under Khan’s feet. The rest of the story is well-known: After an unhealthy dose of procedural and legal drama, the PTI government eventually lost the no-confidence vote. Khan ceased to be the prime minister of Pakistan, but did not cease to blame the Americans for the whole debacle.

On the surface, the conspiracy looks chronologically and logically coherent. The trouble begins when we start to take a closer look at each of its pieces.

What Sources Prove the Story?

No material, such as documents or photographs of wire transfers, have been shared to prove that there was any collusion between the U.S. government and Pakistani lawmakers to oust Khan. Thus, in the face of a lack of anything more concrete than a devilish story, I will focus on recent statements that the involved politicians made in their speeches and interviews in Urdu.

The fact that Khan intended to visit Moscow was revealed in the press at least as early as February 7.  The Americans were at the time publicly warning of a looming Russian invasion of Ukraine; thus it is plausible to assume that they knew that both the invasion and Khan’s visit were nearing. It is indeed quite possible that the Americans may have asked Khan to cancel his visit at such a tense time, due to the diplomatic optics it would have created (and which it did, indeed, create).

The first minor problem is that there is no evidence of such a phone call. This claim was not confirmed by the American side, nor by Pakistan’s national security advisor, Moeed Yusuf, who was the alleged receiver of the call. (Yusuf himself recently resigned.) And yet such a phone call could easily be an undisclosed fact, so for the sake of argument let us assume it was made and not publicized.

As mentioned earlier, the no-confidence motion was moved on March 8, after the visit to Moscow. The lawmakers’ betrayal took place on March 30; the final vote took place on the night of April 9. Thus, it would have been theoretically possible for the Americans to bribe certain parliamentarians within this timeframe. Here, however, Khan’s conspiracy theory has a huge evidence gap.

Since he claims that there is proof of contacts between Pakistani politicians and Americans, why has no evidence been revealed? Let us assume none of it can be done without a proper legal case. Khan has been seeking to establish a judicial commission to prove the conspiracy, but the decision to form it was eventually made just before his government lost the no-confidence vote. Let us therefore assume there is evidence waiting to be examined by courts and commissions.

What other evidence does Khan speak of? Only one more – a certain letter on which he focused more than other aspects, but did not reveal either. On March 27, during a rally speech, he declared that a foreign conspiracy was being hatched to topple his government. Then he added that they (the Pakistani government) were “given a warning in writing.” He waved a letter before the crowds, claiming that this very piece of paper was evidence of the conspiracy against him. However, he did not show its contents publicly and did not really explain what kind of document it was. Despite announcements that the letter would be revealed, Khan never did so, eventually claiming it was encrypted, and hence revealing it would show what code Pakistan’s services are using.

The letter has since then been referred to as a “threat letter,” but over time it was eventually made clear, including by Khan, that it was not really a letter published by any foreign foe or domestic rival. It was a diplomatic cable sent from the Embassy of Pakistan in the United States. It reportedly registered a conversation during a meeting between outgoing Pakistani Ambassador Asad Majeed Khan and Assistant Secretary of State for South and Central Asian Affairs Donald Lu. Thus, the mystery-shrouded document probably should not been termed a “threat letter” but rather a letter that allegedly recorded a warning from a U.S. official as forwarded by Pakistan’s diplomats.

The cable, Khan claimed, was received by his government on March 7 or 8. In his March 31 address to the nation, and again in another address on April 9, Khan spoke of what occurred during the meeting. According to Khan’s telling, as Washington was irked by Khan’s recent refusal to cancel the visit to Russia, Pakistan’s ambassador was told by the U.S. official that in case the current Islamabad government was to survive the no-confidence vote, Pakistan would face serious consequences from Washington. On the other hand, if Khan lost the vote and thus his power, Pakistan-U.S. relations could be mended.

If such assumptions are made, the internal logic of the conspiracy theory appears to be correct. A few days after Khan visited Moscow, despite being told not to, an American official warned Pakistan’s ambassador that relations between the two countries were now strained, and they could only be mended if the government in Islamabad changed. The official apparently wished for the no-confidence motion to succeed, but warned the ambassador that the U.S. was even preparing something else in case the motion failed. This entire warning could be read as pushing Khan to quit by himself, and make way for another government with whom the U.S. would rebuild ties. Yet, Khan boldly stood his ground and was deposed through a bloodless coup veiled as a no-confidence motion. This is what Khan and his followers want us to believe.

However, while this story looks logically coherent (again, once we disregard the lack of actual evidence), it still turns out to be incoherent chronologically.

Khan tells us that the no-confidence motion was a U.S. conspiracy against him as vengeance for his defiant visit to Moscow. But the no-confidence motion had been considered and prepared by the united opposition for months. It was a known fact even at the end of last year that the opposition was hoping to seek such a motion. The fact that it was moved only after the Moscow trip does not mean it was caused by it; the vote had been anticipated for a long time before.

In his March 27 rally speech, Khan said that he and Qureshi had known about the conspiracy to affect Pakistan’s foreign policy, as he put it. Moreover, he declared they had known about it “for months.” How could this plot, therefore, have been a revenge for a visit to Moscow that occurred barely a month before the speech?

Why hasn’t Khan presented, or suggested, any evidence from the past few months if the conspiracy goes back that far?

The truth is that Khan lost a domestic political battle and blamed it on foreign forces. His government probably lost the backing of the army, and this, rather than any U.S. meddling, was a much more crucial element of its downfall. Desperately trying to thwart the opposition’s maneuvers, Khan invoked the specter of a foreign conspiracy to unite people around him.

One can only assume he was doing this with little or no evidence, however, and thus had to add new interpretations to recent events, and to make mountains out of molehills. It is easy to assume that during a meeting with Pakistan’s ambassador an American official would indeed express his displeasure that a visit was to Moscow was made. Let us even assume that the official crossed the diplomatic line and said that he wished Khan’s government would fall in an upcoming no-confidence vote. Would that actually prove a conspiracy? Would a U.S. official admit his government was bribing Pakistani lawmakers in a meeting with the country’s ambassador? It seems Khan chose this single meeting – and the cable which recorded it – as they appeared to rhetorically and chronologically fit into his narrative, having taken place after the Moscow trip and just before the no-confidence vote was moved.

Was the U.S. Capable of a Such a Plot?

Khan seems to suggest that Washington is capable of changing a government in Islamabad if the U.S. does not like Pakistan’s foreign policy. But a quick review of relations reveals this as merely fantasy.

The United States has been highly displeased with certain aspects of Pakistan’s foreign policy for over a decade now. The American government is surely angry that Islamabad supported the Taliban while claiming to aid the U.S. fight against the Taliban. This has been known for years, and yet the Americans somehow did not try to topple, or did not manage to topple, the Islamabad government. In 2021, the Afghan Taliban took over Afghanistan, not without Pakistan’s assistance, and even then Washington did not topple the Islamabad government.

On top of it all, when Osama bin Laden was discovered by the Americans to be living safely in Pakistan (and when he was killed in 2011), Washington must have been furious with Islamabad, certainly much more than when Khan took a trip to Moscow in 2022. And yet even then, in did not topple Pakistan’s government. The Americans are probably not influential enough to do this in Pakistan – something which cannot be said about Pakistan’s own army.