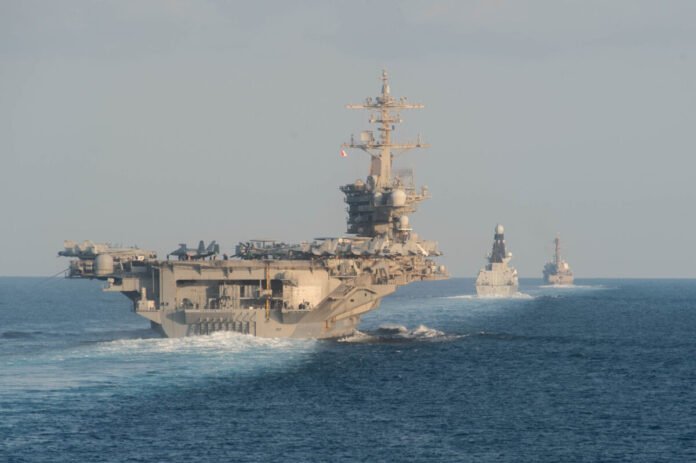 A U.S. nuclear-powered aircraft carrier group is conducting operations in the Sea of Japan, officials said Tuesday, amid fears of new missile launches by North Korea in anticipation of Pyongyang’s upcoming national event.

U.S. officials claimed that the USS Abraham Lincoln strike group is conducting operations with the Japanese forces in the Sea of Japan, also known as the East Sea, to reassure allies and partners of the U.S. commitment to maintaining stability in the region.

South Korean Yonhap News Agency (YNA) cited unnamed sources who claimed that the aircraft carrier was operating in South Korea’s southeastern city of Ulsan, and is expected to stay in the East Sea for three to five days.

South Korea’s Defense Ministry said it was aware that the carrier group is in international waters but declined to comment because it is a U.S. military asset.

This is the first deployment of a carrier group to the waters between South Korea and Japan since 2017. That year the USS Ronald Reagan, Theodore Roosevelt, and Nimitz, and their multi-ship strike groups, deployed in a show of force over North Korea’s missile and nuclear weapons tests.

The warship deployment came amid speculation that Pyongyang could engage in a provocative act and conduct nuclear tests in anticipation of the country’s late founding leader Kim Il-Sung’s birthday on April 15.

“We are worried that, in connection with the upcoming April 15th anniversary, [North Korea] may be tempted to take another provocative action. We obviously hope not, but we will be prepared,” Sung Kim, U.S. special envoy for North Korea, told reporters on April 6.

North Korea has conducted more than 10 missile tests since the start of the year, one of which involved a Hwasong-17, which experts dubbed a “monster missile” capable of striking anywhere in the United States and beyond.

South Korea and the United States on April 4 agreed to reactivate the Extended Deterrence Strategy and Consultation Group to counter “any North Korean provocation.”

“[We] relayed the president-elect’s wish for South Korea and the U.S. to further upgrade the South Korea–U.S. alliance into a comprehensive and strategic alliance and formed a consensus [with Washington],” Park told YNA.

Park noted that both sides agreed on the need to maintain deterrence to counter North Korea’s provocative acts.

“To this end, the countries agreed on the need to strengthen the extended deterrence between South Korea and the U.S. and the importance of reactivating the Extended Deterrence Strategy and Consultation Group that has failed to play its role over the past few years,” he added.