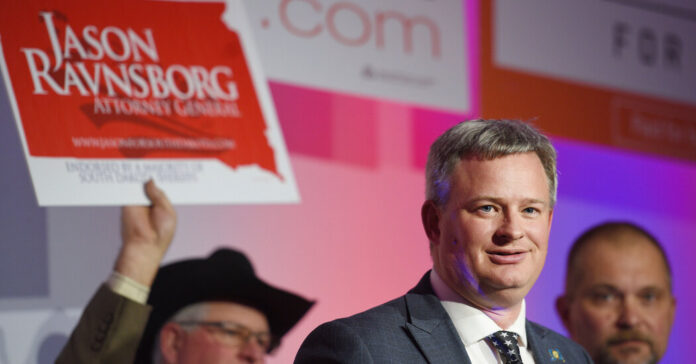 The South Dakota House of Representatives voted on Tuesday to impeach the state’s attorney general, Jason R. Ravnsborg, who fatally struck a man with his car in 2020.

The impeachment vote, which split the Republicans who dominate South Dakota politics, suspended Mr. Ravnsborg from his official duties while he awaits a trial in the State Senate that could result in his permanent removal from office.

“I believe impeachment should be reserved only for grave and exceptional circumstances, and I believe this is one,” State Representative Will Mortenson, a Republican, said Tuesday on the House floor.

Mr. Ravnsborg, a Republican in his first term in office, called 911 in September 2020 to report that he had hit something, possibly a deer, with his car while traveling at night on a rural highway. The next day, when Mr. Ravnsborg and others surveyed the scene of the collision, they saw that the car had struck Joe Boever, 55, who had been walking along the side of the highway near Highmore, S.D.

Mr. Ravnsborg pleaded no contest to two misdemeanor charges in connection with the crash. He did not serve jail time. Prosecutors who testified before a legislative committee this year said they did not have evidence to support more serious charges. That legislative committee recommended against impeachment last month, but left the final decision to the full House, which voted 36-31 to impeach him.

Craig Price, the secretary of the South Dakota Department of Public Safety, told lawmakers that he believed Mr. Ravnsborg should have been charged with second-degree manslaughter.

Mr. Ravnsborg, who had said little publicly about the case, released a letter the day before the impeachment vote, saying that he “could not resign then and cannot resign now because the incident did not impede my ability to perform the functions” of attorney general. He accused Gov. Kristi Noem, a fellow Republican who repeatedly called on him to resign, of taking the “unfortunate circumstances of a man being killed in a traffic accident to make her political moves.”

Ms. Noem fired back, calling the attorney general’s letter bizarre and accusing him of lying about the events of the crash. Investigators had focused on whether Mr. Ravnsborg knew on the night of the crash that it was a person that he had hit, or whether, as he asserted, he did not learn that until the next day.

“The Attorney General wants to make this about me, to distract House members, when the question before them is whether he should be the state’s top law enforcement officer,” Ms. Noem said on Twitter before the impeachment vote. “He killed an innocent man, lied about the events of that evening, and abused his office to cover it up.”

After Mr. Ravnsborg was impeached, Ms. Noem said lawmakers “did the right thing for the people of South Dakota and for Joe Boever’s family.”

For Mr. Ravnsborg to be convicted by the State Senate and possibly removed from office, two-thirds of the senators would have to vote to convict him. The State Constitution requires that Mr. Ravnsborg be served with papers at least 20 days before the Senate trial begins, meaning those proceedings cannot take place until May.

Share
Facebook
Twitter
Pinterest
WhatsApp
Previous articleAfter More Than a Month of Fighting, Where Do Things Stand in the Russia-Ukraine War?
Next articleShanghai extends citywide lockdown after Beijing steps up pressure over zero-COVID — Radio Free Asia