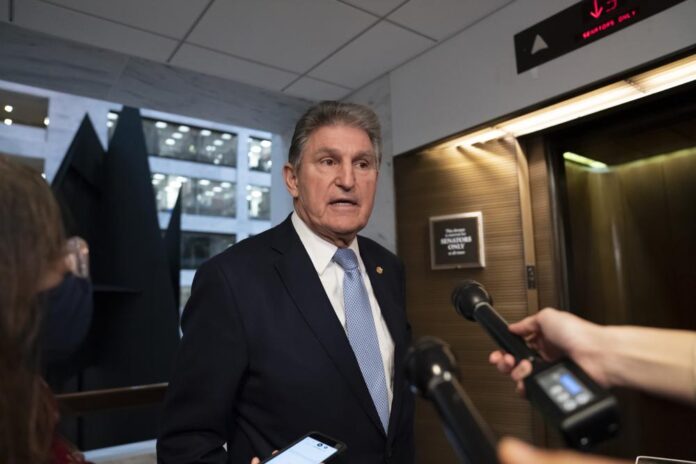 Sen. Joe Manchin (D-W.Va.) and Republican lawmakers blasted President Joe Biden’s economic policies after a Department of Labor inflation report showed that inflation increased by 8.5 percent over the past year.

Since Biden took office, inflation has increased at a quick trot, with everyday essentials like food and gasoline sometimes outstripping the overall inflation rate.

According to the Labor Department’s Consumer Price Index released on April 12, the overall inflation rate over the past year hit 8.5 percent (pdf).

However, overall inflation in the price of food exceeded this, with prices rising by 8.8 percent on average.

The overall price of energy nearly quadrupled the base rate of inflation over the past year, hitting 32 percent. The price of gasoline rose even faster, with prices sitting 48 percent higher than they were one year ago.

Manchin, who has been an outspoken critic of Biden’s monetary and economic policy, blasted the report in a statement.

“Let me be clear, inflation is a tax and today’s historic inflation data tells another chilling story about how these taxes on Americans are completely out of control,” Manchin said. “Hard earned wages and financial savings are disappearing faster every month as prices continue to climb, while the pain and frustration of spending more on everyday items lingers over us all, especially among those who can afford it the least.”

He continued: “When will this end? It is a disservice to the American people to act as if inflation is a new phenomenon. The Federal Reserve and the Administration failed to act fast enough, and today’s data is a snapshot in time of the consequences being felt across the country. Instead of acting boldly, our elected leaders and the Federal Reserve continue to respond with half-measures and rhetorical failures searching for where to lay the blame. The American people deserve the truth about why record inflation is happening and what must be done to control it.

“Here is the truth, we cannot spend our way to a balanced, healthy economy and continue adding to our $30 trillion national debt. Getting inflation under control will require more aggressive action by a Federal Reserve that waited too long to act. It demands the Administration and Congress, Democrats and Republicans alike, support an all-the-above energy policy because that is the only way to bring down the high price of gas and energy while attacking climate change. The United States of America is equipped to be energy independent from Russia and other terror-sponsoring countries while also working to fight global climate change and break our dependence on the critical mineral supply change [sic] from China.

“The inflation number today is only the beginning unless we take immediate action to address the pain being felt across our nation. This is one problem facing the American people that one political party alone cannot fix. The American people cannot wait any longer.”

“If you want inflation to go down, Americans will have to change leadership,” Graham said.

“If the Biden administration truly wants to find the cause of record high inflation, all they have to do is look in the mirror,” he continued. “These dramatic, record-setting increases in inflation weren’t caused by Vladimir Putin, but by the bad choices of President Biden and the Democrats who control Congress.”

Gov. Ron DeSantis of Florida also took to Twitter to blast the administration in a statement.

“Inflation is at a 40-year high of 8.5% due to federal policies of borrowing & printing money at unfathomable levels & bad energy policy, which is hurting Floridians,” DeSantis wrote. “Biden could unleash domestic energy production to provide relief. Instead, he is content watching people suffer.”

However, some Democrats suggested a different reason for the rising prices.

“Giant corporations are using inflation as cover to raise their prices & boost their profits,” Sen. Elizabeth Warren (D-Mass.) said in a tweet. “In industry after industry, we have too little competition & companies have too much power to increase prices. I’ve been calling out this corporate profiteering & price gouging.”

“Inflation is rising, yes,” Jayapal admitted on Twitter. “But corporations are using it as a smokescreen to hike prices even higher and pad their wallets.”

When the effects of inflation began to become obvious last year, the White House and most Democrats in Congress originally claimed that the inflation would be “transitory.” Over time, they have been forced to drop that line, and many have instead taken to blaming corporations for the rapid increase in costs.

Still, with no end to the inflation in sight, Democrats—who are widely expected to lose at least the House, where they hold only a handful of seats more than Republicans, in the 2022 midterm elections—run the risk of suffering further losses at the polls in November.